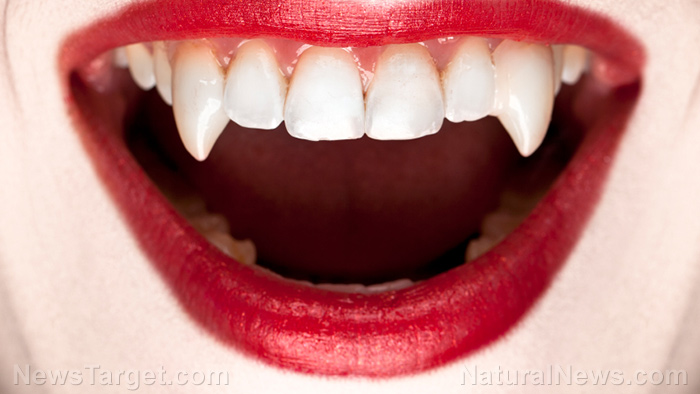 (Natural News) With their expensive homes and vehicles and glittering lifestyles, they may seem nothing like the vampires of fictional literature, but that doesn’t mean they aren’t sucking the life out of their victims. Reaching an all new low in exploitation of the poor and innocent, it has now become fashionable for the idle rich to try to hang on to their youth and beauty by getting expensive blood transfusions using the blood of young children.

As reported by Fellowship of the Minds, members of the “healthy but wealthy” elite are paying upwards of $8,000 for 1.5 liters (34 fluid ounces) of young blood in a desperate bid to turn back the hands of time. (Related: Thousands of blood-sucking vampires actually live all over the world, and they just need a little help, study says.)

Parabiosis: A way for the parasitic rich to suck the life out of young children

The concept of infusing young blood into older bodies – known as parabiosis – is nothing new. Medical Daily notes that not only its anti-aging merits but also its potential in speeding up the metabolism and fighting diabetes and cancer have been a recognized field of study for at least a century.

Strictly speaking, parabiosis involves linking the circulatory systems of two animals together. Science has moved way beyond the initial animal experiments which involved literally sewing the circulatory systems of rats together, however. Nowadays, researchers are focusing on simply isolating specific proteins and plasma from young blood and injecting it into old patients to derive the “benefits” of the treatment in a far more streamlined and less invasive way.

While young blood transfusions cannot literally replace an elderly person’s body with that of a young person, there is some scientific evidence that it can rejuvenate tissue and repair cellular damage. (Related: “Vampire addicts” are now injecting themselves with human blood mixed with MORPHINE.)

A report published in the journal Nature in 2015 noted the following regarding rodent trials of the controversial treatment:

By joining the circulatory system of an old mouse to that of a young mouse, scientists have produced some remarkable results. In the heart, brain, muscles and almost every other tissue examined, the blood of young mice seems to bring new life to aging organs, making old mice stronger, smarter and healthier. It even makes their fur shinier.

Interestingly, while infusing old patients with young blood definitely seemed to reverse some of the signs of aging, the exact opposite effect was noted when young people were injected with “old” blood.

Prestigious universities throw their weight behind the controversial treatment

Two prestigious Ivy League colleges – Stanford and Harvard – have conducted studies which appear to confirm the effectiveness of the “vampire” treatment using either a specifically isolated protein from mouse blood, or by simply injecting plasma from young mice into old mice. Plasma is the part of the blood that keeps cells in suspension, and contains electrolytes, hormones, dissolved proteins, glucose, clotting factors, carbon dioxide and oxygen. It serves as both a protein reserve and as a protection against infection and blood disorders.

Ambrosia, a company based in California, has been offering transfusion of human plasma sourced from young donors at a cool $8,000 for 1.5 liters, which is transfused into the recipient over a two-day period. Ambrosia is owned by a 33-year-old med school graduate who does not have a license to practice – Jess Karmazin – and is overseen by a doctor who was disciplined in 2015 by the California Medical Board. To bypass the FDA approval needed to legitimately sell the transfusions, Ambrosia is calling its operation a “clinical trial.”

Karmazin insists that his “trial” participants are experiencing wonderful results, including “improvements in sleep and declines in levels of carcino-embryonic antigens and amyloids — proteins involved in cancer and Alzheimer’s disease — of as much as 20%.” What he is selling is potentially very dangerous, however.

Fellowship of the Minds warned:

[I]n the young-old mice experiments, researchers found that some of these mice died quickly (11 out of 69 in one experiment) for reasons the scientists could not explain, but described as possibly some form of rejection. Evidence from two large studies in 2017 showed that the transfusion of blood from younger donors to older people led to outcomes that were either no different from, or led to worse outcomes than, blood from older donors.

And that doesn’t even take into consideration the ethical concerns about where the need for a fresh supply of young blood could eventually lead.

For more stories like this one be sure to visit Twisted.news.