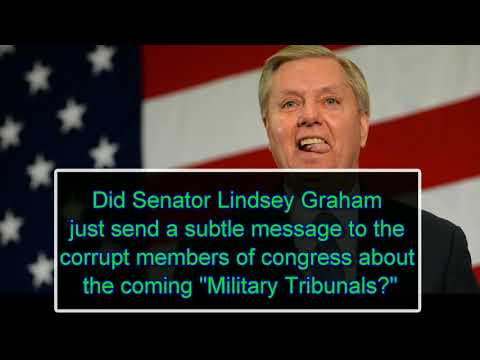 The Trump White House insider who calls himself Q has repeatedly posted about military tribunals and sealed indictments, now numbering an extraordinary 40,483 as of June 30, 2018.

The Military Commissions Act of 2006 limits military tribunal trials to non-citizens only.

On September 5, 2018, during Day 2 of the Senate confirmation hearing for Supreme Court nominee Judge Brett Kavanaugh, Sen. Lindsey Graham (R-SC) asked Kavanaugh a series of very interesting questions that seem to make a case for American citizens being subject to military tribunals.

In the event that YouTube is censoring the video, you can watch the exchange on C-SPAN here.

Here’s my transcript of the Graham-Kavanaugh Q & A:

Graham: So when somebody says, post-9/11, that we’d been at war, and it’s called the War on Terrorism, do you generally agree with that concept?

Kavanaugh: I do, senator, because Congress passed the authorization for use of military force, which is still in effect. That was passed, of course, on September 14, 2001, three days later.

Graham: Let’s talk about the law and war. Is there a body of law called the law of armed conflict?

Kavanaugh: There is such a body, senator.

Graham: Are there differences between those two bodies of law?

Graham: From an American citizen’s point of view, do your constitutional rights follow you? If you’re in Paris, does the Fourth Amendment protect you as an American from your own government?

Kavanaugh: From your own government, yes.

Graham: So, if you’re in Afghanistan, do your constitutional rights protect you against your own government?

Kavanaugh: If you’re an American in Afghanistan, you have constitutional rights as against the U.S. government.

Graham: Isn’t there also a long settled law that goes back to the Eisentrager case (I can’t remember the name of it)….

Graham: Right, that American citizens who collaborate with the enemy are considered enemy combatants?

Kavanaugh: They can be, they’re often, sometimes criminally prosecuted, sometimes treated in the military.

Graham: Let’s talk about can be. I think there’s a Supreme Court decision that said that American citizens who collaborated with Nazi saboteurs were tried by the military, is that correct?

Kavanaugh: That is correct.

Graham: I think a couple of them were executed.

Graham: So, if anybody doubts there’s a longstanding history in this country that your constitutional rights follow you wherever you go, but you don’t have a constitutional right to turn on your own government and collaborate with the enemy of the nation. You’ll be treated differently. What’s the name of the case, if you can recall, that reaffirmed the concept that you can hold one of our own as an enemy combatant if they were engaged in terrorist activities in Afghanistan. Are you familiar with that case?

Graham: So the bottom line is on every American citizen know you have constitutional rights, but you do not have a constitutional right to collaborate with the enemy. There is a body of law well developed long before 9/11 that understood the difference between basic criminal law and the law of armed conflict. Do you understand those difference?

Kavanaugh: I do understand that there are different bodies of law of course, senator.

Q picked up on the significance of Graham’s questions. On the same day as the confirmation hearing, Sept. 5, Q published post #2093, which highlights the distinction Graham made between military law vs. criminal law.

Lindsey Graham has a J.D. from the University of South Carolina. Before he entered politics, he was a U.S. Air Force officer and JAG (judge advocate general).