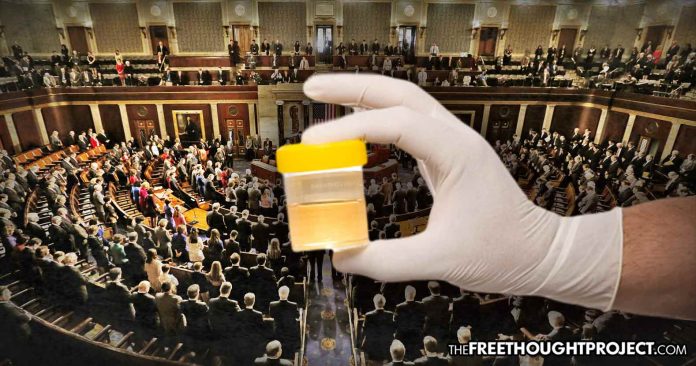 Louisiana Congressman, Rep. Clay Higgins (R-LA) wants to force every single member of Congress to take regular drug tests and he wants them to pay for the tests themselves.

Higgins introduced the legislation this week which, if passed, will force all federal lawmakers to be randomly drug tested once per term for illegal drug use.

According to the legislation, titled: RANDOM DRUG TESTING OF MEMBERS OF THE HOUSE OF REPRESENTATIVES AND THE SENATE.

(a) In General.—Each Member of the House of Representatives and the Senate shall participate in accordance with this concurrent resolution in a program for testing for illegal use of controlled substances.

(b) Features.—The program under this concurrent resolution shall include the following features:

(1) Each Member of the House of Representatives and the Senate shall be subject to a random drug test once per term of such Member.

(2) Each confirmed positive result under the program shall be provided as follows:

(A) To the Member involved.

Higgins said he introduced the legislation to treat members of Congress like regular working-class citizens who Higgins thinks are drug tested on a regular basis.

“Elected officials in Washington D.C. should be subject to the same kind of random drug screenings that blue-collar, working-class Americans have to endure. Congress shouldn’t get to live by a different set of rules. This effort is about maintaining accountability and ensuring sober service to We, the People,” said Higgins in a statement.

For those who don’t remember, Clay Higgins, as Reason Magazine points out, is the same guy who last July recorded a video of himself inside a former gas chamber at the Auschwitz concentration camp. Higgins was roundly criticized at the time, not just by the usual outrage mob but also by the Auschwitz Memorial’s Twitter account. Higgins’ offense wasn’t the worst thing in the world, but it was widely seen as disrespectful and just plain dumb, especially considering that a stone engraving near the entrance to the gas chamber asked visitors to remain silent.

When questioned whether or not this drug test legislation was some political stunt, Higgins insisted that he is serious.

“This isn’t a stunt,” he told the Monroe News Star. “It’s not about shaming or embarrassing or ending members’ careers. It’s about our body adhering to the same standards almost every other working man and woman is held to on the job.”

But Higgins is way off here. Every member of of the American workforce is not subject to drug tests — thankfully. While many jobs do require random drug tests, the overwhelming majority of jobs do not.

While Washington is certainly full of criminal politicians, the idea that drug testing them is going to fix anything is pretty silly. In fact, many of them would probably do well to start using drugs like marijuana.

If members of Congress frequently engaged in smoking pot, perhaps they’d overturn the laws which require cops to lock people up for it.

Perhaps, Higgins should force Congress to take drug tests, and perhaps they should have to have at least one cannabis-positive one per year.