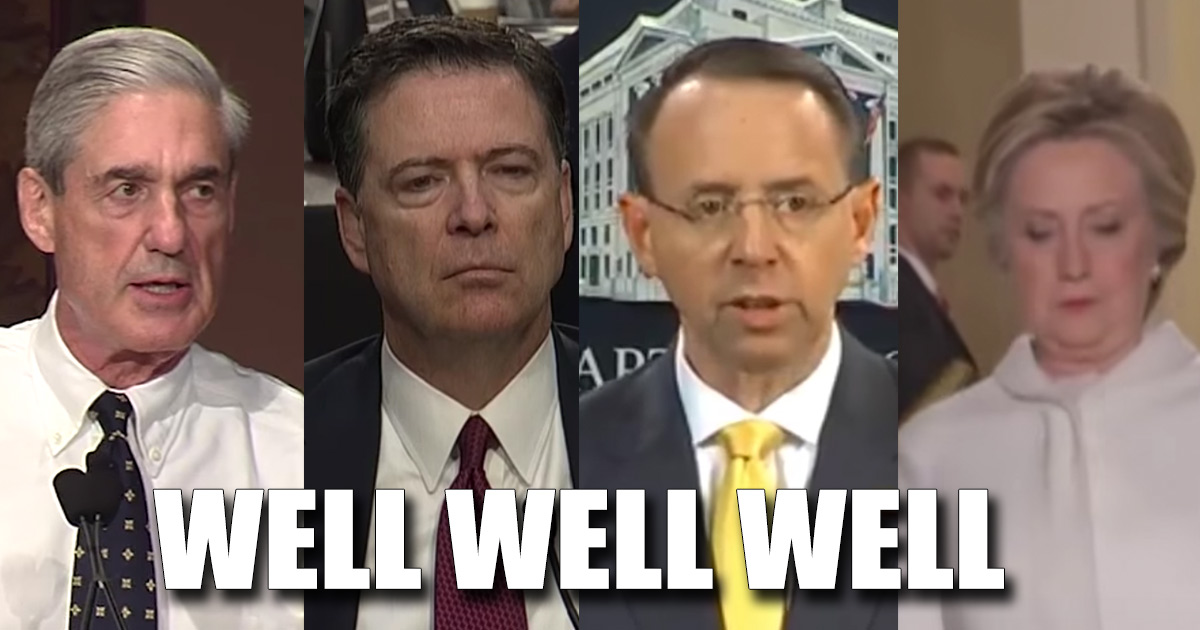 Deputy Attorney General Rod Rosenstein has some explaining to do. He appointed Robert Mueller as Special Counsel to investigate possible collusion between President Trump and Russia prior to the 2016 election. The problem with that? There was no evidence. Fox News’ Catherine Herridge has just broken a story, which I can only describe as a game changer, and I don’t use that term lightly.

Fox News has obtained a transcript of former FBI attorney Lisa Page’s testimony before Congress this summer. The FBI counterintelligence investigation had been opened at the end of July 2016, and Page said that as late as May 2017, the month that Rosenstein appointed Mueller, there was no evidence of collusion.

During the hearing, Rep. John Ratcliffe (R-TX) asked Page to explain a text message chain between her and Strzok from May 2017; the two had been discussing the merits of joining Special Counsel Robert Mueller’s team.

Specifically, Ratcliffe inquired about one of Strzok’s texts that we are all familiar with, at least in part.

Who gives a f*ck, one more A(ssistant) D(irector)…(versus) (a)n investigation leading to impeachment?…you and I both know the odds are nothing. If I thought it was likely I’d be there no question. I hesitate in part because of my gut sense and concern there’s no big there, there.

“I think this represents that even as far as May 2017, we still couldn’t answer the question,” she said. Then, according to the transcript, Page stopped mid-answer.”… Sorry. Can I consult with counsel? I’m sorry. I need to consult with FBI counsel for a moment.”

When Ratcliffe asked her why Strzok pursued the case if he thought “the odds were nothing and that he had a concern that there was no big there there regarding any collusion…,” Page responded:

No, I don’t think so. I think it’s a reflection of us still not knowing…It still existed in the scope of possibility that there would be literally nothing, probably not nothing nothing, as we probably knew more than that by that point. But in the scheme of the possible outcomes, the most serious one obviously being crimes serious enough to warrant impeachment; but on the other scale that, you know, maybe an unwitting person was, in fact, involved in the release of information, but it didn’t ultimately touch any senior, you know, people in the administration or on the campaign. And so the text just sort of reflects that spectrum.

During the deposition, Page said she was not trying to be “cagey,” but that there were restrictions on what she could reveal. “I’m not supposed to talk about the sufficiency of evidence, so that’s why I am weighing my words carefully.”

“Investigations are fluid, right? And so at various times, leads are promising and leads fade away. And so I can’t — I can’t answer more his sentiment with respect to this particular text, but certainly at this point the case had been ongoing. We didn’t have an answer. That’s obvious. And I think we all sort of went back and forth about like what — what the answer was really going to be.”

During DOJ IG Michael Horowitz’ investigation on the FBI’s handling of the Clinton email probe, he asked Strzok about this text specifically. Strzok said:

“My question (was) about whether or not this represented a large, coordinated conspiracy or not. And from that, as I looked at what would give me professional fulfillment, what I thought would be the best use of my skills and talents for the FBI and for the United States, whether to take, which path to take.”

When Fox News asked Ratcliffe for a comment, he said:

I cannot provide the specifics of a confidential interview. But I can say that Lisa Page left me with the impression, based on her own words, that the lead investigator of the Russian collusion case, Peter Strzok, had found no evidence of collusion after nearly a year.

I think that is the only conclusion one can draw from Page’s testimony as well as from everything else that’s been revealed so far. There was no legal reason either to open a counterintelligence investigation in July 2016 or to appoint a Special Counsel in May 2017. All of this was orchestrated for political reasons only. Thus, all the secrecy, the unwillingness to hand over documents. Too many secrets have been uncovered already for the rest of the story to remain concealed.

And all of the participants in this fraud, from Rod Rosenstein who knowingly appointed a special counsel when he knew there had been no crime committed and Robert Mueller, who willingly and happily presided over this farce, appointing a team of anti-Trump thugs to dig until they found something, anything, to every last member of the mainstream media who perpetuated this fraud. The magnitude of the deception, the number of high-level government officials involved, and their willingness to disregard the rule of law make this the darkest period ever in American political history.