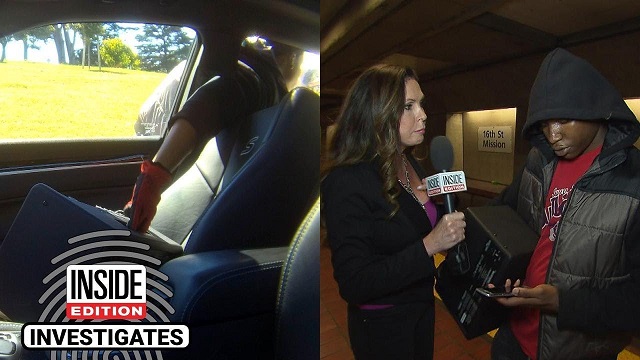 Democrats tell us constantly that “California represents the future of America.”

Here’s a snapshot of what that “future” has in store for us all!

An “Inside Edition” crew who baited “smash and grab” thieves to reported on robberies in California’s San Francisco Bay Area were the victims of a true robbery, and had thousands of dollars worth of equipment stolen.

An “Inside Edition” crew who baited “smash and grab” thieves in California’s San Francisco Bay Area were the victims of a true robbery — resulting in the loss of thousands of dollars worth of equipment.

In an effort to report on rampant robberies in the area, “Inside Edition” employees filmed themselves planting GPS trackers inside items that were placed in a car parked in an area well-known for theft.

The trackers were placed inside of a $250 speaker and a purse just before reporter Lisa Guerrero explains “for [their] last trick,” they also placed video cameras throughout the car in the event the products get stolen.

Sure enough, two people were soon spotted robbing the vehicle. A man was seen in the segment smashing open the car’s back window, pulling out the handbag and throwing it to a woman sitting nearby before removing the speaker.

[…]While the crew was interviewing the man captured on camera in the initial theft, their actual crew car was broken into via the “smash and grab” method, leaving “thousands of dollars worth of equipment” stolen.

According to the San Francisco Chronicle, more than 31,000 people reported “smash and grab” robberies in the city in 2017 alone.

This is just one type of crime. Nearly 5000 cars were stolen just last year.

A 10 man crime ring was busted earlier this year for robbing some 60 homes and stealing an estimated $3 million worth of property.

The way to catch these criminals in the act is through bait trucks, but as VICE explained last month, that’s “racist.”