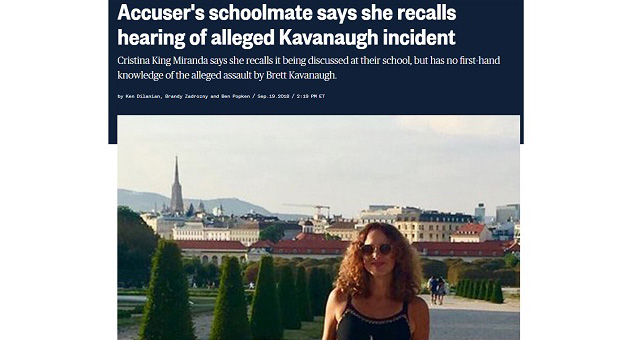 Women deserve to be believed — no matter how ridiculous or obviously made up their stories are.

Case in point: Cristina King Miranda, an alleged schoolmate of Christine Blasey Ford, who said Tuesday on Facebook that she “unearthed memories” about how “many of us” heard about the alleged Kavanaugh incident “in school.”

There’s just one problem: Ford already said she told no one about the alleged incident until 2012 (when Kavanaugh was coincidentally being floated as Mitt Romney’s top pick for Supreme Court if he were to win the election).

Ford also doesn’t even know when the alleged incident happened or where it happened.

Here’s the full post and King’s comments as archived on Archive.is.

After the smear attempt got traction, Cristina King Miranda deleted her post “because it served its purpose.” Of course, none of this stopped NBC News from running with the story and putting it in the number one slot at the top of their homepage on Wednesday. WASHINGTON — A former schoolmate of Brett Kavanaugh’s accuser wrote a Facebook post saying she recalls hearing about the alleged assault involving Kavanaugh, though she says she has no first-hand information to corroborate the accuser’s claims.

“Christine Blasey Ford was a year or so behind me,” wrote the woman, Cristina Miranda King, who now works as a performing arts curator in Mexico City. “I did not know her personally but I remember her. This incident did happen.”

She added, “Many of us heard a buzz about it indirectly with few specific details. However Christine’s vivid recollection should be more than enough for us to truly, deeply know that the accusation is true.”

Ford, a research psychologist in Northern California, has accused Kavanaugh of sexually assaulting her more than 30 years ago at a drunken high school party. He denies the allegation.

The assertion that other people heard about and discussed an incident between Ford and Kavanaugh at the time it is alleged to have happened could loom as an important factor in any investigation of the claim.

These people have no shame.

[…]King has since taken down her Facebook post, which NBC News verified as having appeared on her account. She said on Twitter that she deleted it “because it served its purpose and I am now dealing with a slew of requests for interviews … Organizing how I want to proceed. Was not ready for that, not sure I am interested in pursuing. Thanks for reading.”

She later posted on Facebook: “To all media, I will not be doing anymore interviews. No more circus for me. To clarify my post: I do not have first hand knowledge of the incident that Dr. Christine Blasey Ford mentions, and I stand by my support for Christine. That’s it. I don’t have more to say on the subject. Please don’t contact me further.”

NBC News confirmed that the statements were hers, but did not confirm her allegation. King has also been critical of Trump administration policy on social media.

Her letter was an unhinged screed.

Blasey Ford told The Washington Post that she told no one of the incident “in any detail” until 2012, when she was in couples therapy with her husband.

In her original post, King said she knew Kavanaugh and Mark Judge, the man Ford says was present during the alleged assault. Judge has said through his attorney he remembers no such incident.

King graduated in 1983 from Holton-Arms, the elite all-female private school that Ford also attended, according to an open letter King and many other alumnae signed in support of Ford.

[…]Holton-Arms did not return a call seeking verification of King’s attendance. But a 1982 yearbook lists “Cristina King” as a student, and member of the Holton-Arms Athletic Association, an honor society. In her senior year, she led the school chorus as president, according to the 1983 yearbook. “Cristina King was able to keep the chorus members in tune as they trooped up to Hill and Lawrenceville to dazzle the boys with their talent and good looks,” the club’s yearbook page reads.

Ford appears in both yearbooks as well. She graduated in 1984.

The media will run with absolutely anything in order to undermine President Trump.

Meanwhile, a third student Christine Blasey Ford claimed attended the alleged party the she claims the Kavanaugh incident occurred at, Patrick J. Smyth, denied any memory of the alleged incident in a letter to the Senate Judiciary Committee released Tuesday by CNN.