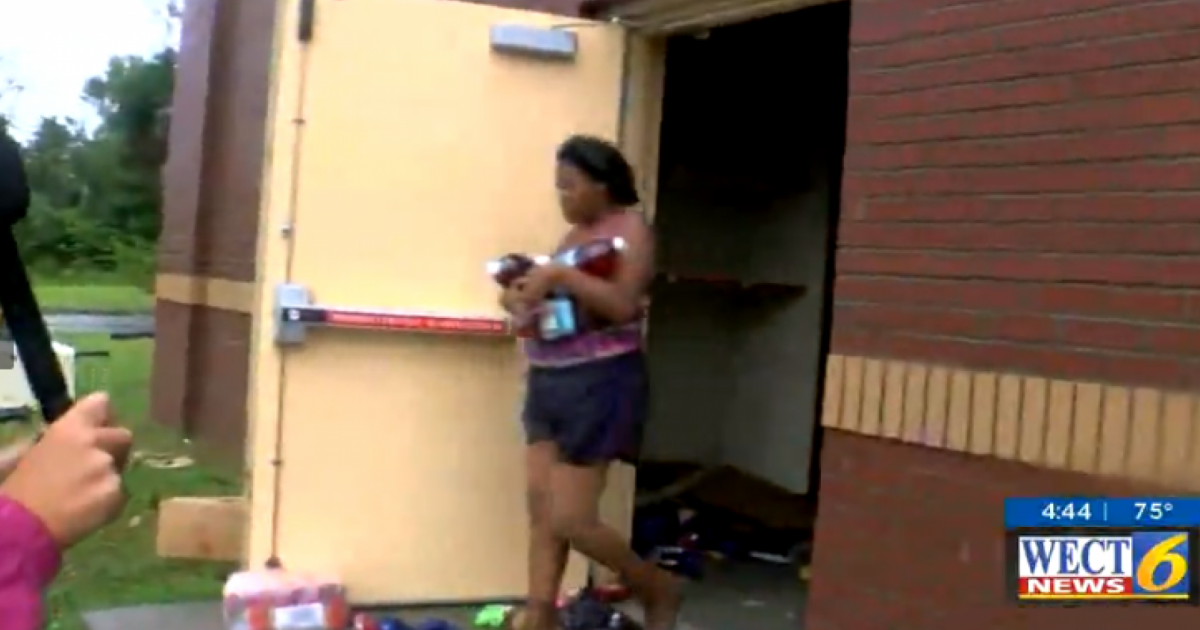 When a hurricane comes, fake reporters stand in ponds or lean into the wind. Real reporters confront looters, as this brave woman, Chelsea Donovan of WECT, does in North Carolina, chasing them down and demanding answers.

Her attempts to shame them are utterly futile. The Democrat base knows no shame. Hasn’t even the faintest concept of it. And it’s only a question of when the left, which believes that looting is a human right, decides to label her something alliterative, e.g. Permit Patty, and demand her firing.

A little flashback courtesy of Newsweek.

As the day wore on, the turmoil increased. Looting and burning swept down 14th Street and 7th Street, two of the ghetto’s main thoroughfares, then spread south to the shopping district just east of the White House. On the sidewalk in front of the Justice Department’s headquarters on Pennsylvania Avenue, shirt-sleeved DOJ staffers watched helplessly as looters cleaned out Kaufman’s clothing store. The story was the same all over. Without the force to control the situation, the cops let the looters run wild. The result was an eerie, carni­val atmosphere. Jolly blacks dashed in and out of shattered shop windows carry­ing their booty away in plain sight of the Law. Others tooled through the shopping districts in late-model cars, pausing to 611 them with loot and then speeding off­ only to stop obediently for red lights.

Looters stopped on the sidewalks to try on new sports jackets and to doff their old shoes for stolen new ones. Only rare­ly did police interfere. At the corner of 14th and G Streets, police braced a Ne­gro over a car. On the hood were several pairs of shoes. “They killed my brother, they killed Luther King,” the culprit cried. “Was he stealing shoes when they killed him?” retorted a cop.

White reporters moved among the plunderers with impunity. “Take a good look, baby,” a looter cried to a carload of newsmen as he emerged from a liquor store on H Street. “In fact, have a bottle”—and he tossed a fifth of high-priced Scotch into the car. Young black girls and mothers, even 7- and 8-year-old children, roamed the streets with shopping carts, stocking up on gro­ceries. “Cohen’s is open,” chirped one woman to friends as she headed for a sacked dry-goods store with the noncha­lance of a matron going marketing. “Take everything you need, baby,” Negroes called to each other from shattered store windows. Mingling with the crowds on Pennsylvania Avenue were observers from the German, French, Japanese, Norwegian and other embassies, taking notes to cable home. “It’s a revolution,” a French Embassy attache remarked to his companion.

There was little fighting in Chicago. But at least nine Negroes were killed there, mostly in the act of looting. As elsewhere, the police who pegged shots at looters were the exceptions to the rule. And so the plundering went on al­most unopposed. Along Kedzie Avenue on the West Side, Negroes carried arm­fuls and cartloads of booty from ravaged storefronts. “I’m a hard man and I want some revenge,” explained one. “King’s dead and he ain’t ever gonna get what he wanted. But we’re alive, man, and we’re getting what we want.”

‘Bums’: Nearby, a Negro woman begged the vandals to stop. “Come out of that store and leave that stuff,” she shouted. “You all nothing but bums. Ain’t we got enough trouble with our neigh­borhood burning down? Where are those people gonna live after you burn them down?”

And what happens if the stores don’t reopen? Society will take the blame for creating a “food desert”. It’s never the fault of the looters.

Democrats In Congress Seeking Result That Could Be Used Against Biden
October 17th, 2021 Conservative Firing Line