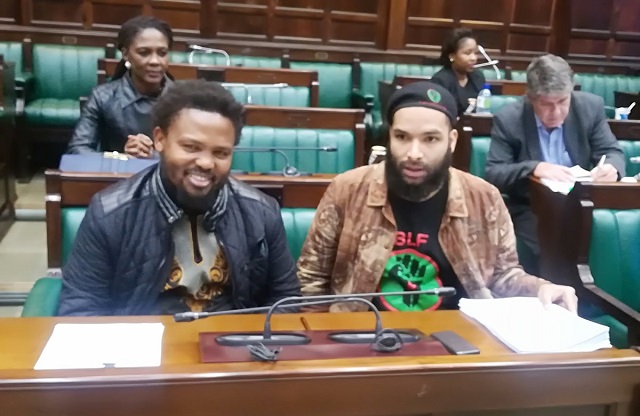 Remember folks: white people are not being targeted in South Africa and President Trump and others who suggest otherwise are conspiracy theorists!

The BLF spokesperson has posted views reflecting his party’s belief that all white people in South Africa are criminals by virtue of their existence.

Black First, Land First spokesperson Lindsay Maasdorp has told the author of this article and others about the controversial party that my “existence is a crime.”

He also repeated his party’s slogan, “land or death.”

[…]Maasdorp’s assertion that, as a white person, “my existence is a crime,” provides some insight into the party’s apparent belief that, due to the theft of land by white people during colonisation and apartheid, all white South Africans are therefore criminals, regardless of when they were born and what their political views, history or affiliations may be.

At the recent land hearings held in parliament, Mngxitama called for section 25 of the Constitution to be scrapped entirely to ensure that all land owned by white people is returned to their black counterparts.

The BLF leader said this section should be replaced with a declaration that all land owned by white people in South Africa was stolen property.

Mngxitama has repeatedly made the assertion that absolutely all land occupied by white South Africans should be expropriated.

This makes the party the most extreme in South Africa when it comes to the land issue and in its attitude to white people in general.

They have been accused of hate speech by the South African Human Rights Commision, who have recommended that the party be prevented from contesting the 2019 elections on the grounds that they have made statements violating the Electoral Act.

Maasdorp has come under fire in the past for his posting on both Facebook and Twitter that “I have aspirations to kill white people, and this must be achieved!”