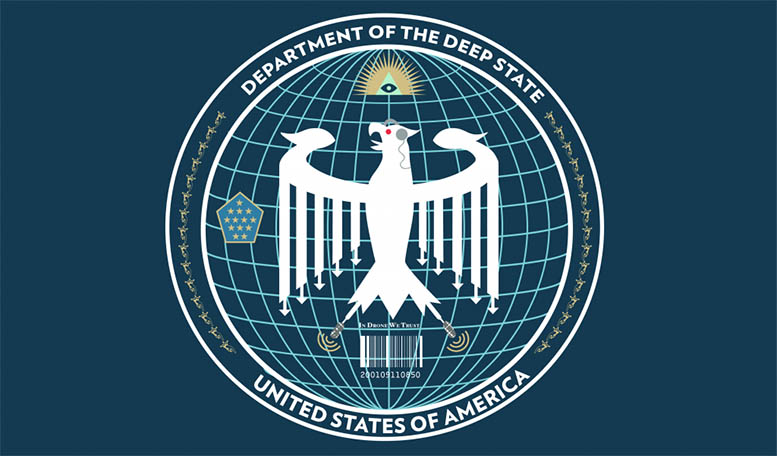 Many resourceful and credible independent researchers uncover information the mainstream, lamestream media, the Deep State, the Shadow Government, and Internet search engines censors don’t want the world and the U.S. population, in particular, to know.  One such individual is Alexandra Bruce of Forbidden Knowledge TV.net  and to whom I want to give a profound “hat tip” for sending me the information about which I’m writing as an Op-Ed.

After listening to the galvanizing information twice, I feel compelled to explain what prompted me to write this as an Op-Ed. As a researcher and journalist who is interested in many issues besides my life’s work centering on human health issues, I always have wondered how we as a supposed democratic society and culture in the USA got to the point of where we are now surveilled and controlled by operatives behind the scenes known by various names.  There always seemed to be a “missing link” for me, but now I think something has surfaced which probably is a major answer to the problem.

If I am correct in my assumptions, the “take away” from the discussions in the link “Gotcha! Trump’s September Surprise”  is there are dots that have to be connected by federal prosecutorial agencies, but may not be because they are integral parts of the “in crowd” privy to the KEYS that control the processes involved.  The topic discussed is “The Keys to the Digital Kingdom” and who controls them!

Host Douglas Gabriel and Michael McKibben, the “Founder of Leader Technologies has been engaged in  massive forensic research  to produce indictable evidence for their case against Facebook. Several times along the way, they’ve been floored by their discoveries about how the world actually works, in the spheres of high finance, governments and telecommunications,” discuss what McKibben’s uncovered regarding Hillary Clinton and her access to digital keys for global Internet transactions [1].

First and foremost, Hillary Clinton was a patent lawyer working at the Rose Law Firm, which represented patent claims for many individuals and entities who would become today’s Tech Giants!  That was back in the 1980s when Hillary apparently began her quest to become a global “control freak.”

According to Alexandra Bruce’s write up introducing the interview video, she says:

McKibben found that “Hillary Clinton and her cronies have access to all of the digital keys for all transactions on the planet. In other words, unless you can build a new Internet, you – and say, your cryptocurrencies, for example – are accessible by them. This is literally how they can (and do) ‘turn off your chip’, in the words of the late Aaron Russo.” [1]

“So literally, these keys are used in every transaction on the planet that uses the Internet and what we’ve discovered and – I’m still reeling, my mind is boggled by what we’ve now come to find out, but that a company called Entrust was created in 1998 as a spin-off of a Canadian telephone company [Nortel, a now-defunct Canadian telecommunications conglomerate, with people like former US Secretary of Defense, Frank Carlucci on its Board of Directors. Its 2009 bankruptcy was the largest in Canadian history, leaving pensioners and shareholders with staggering losses while Nortel executives continued to draw “retention bonuses” totaling US$190 million during the eight-year post-bankruptcy period]. [1] [CJF emphasis]

“That is just astounding, how a private individual could have come to have such power but the facts are now clear, that’s the circumstance we’re in right now. This includes almost all of the agencies, executive agencies of the government and that includes the Federal Deposit Insurance Corporation (FDIC), Department of Treasury, Department of Commerce, National Institute of Standards and Technology (NIST), General Services Agency (GSA), the Department of State, the Department of Energy, the US Post Office, the US Patent Office, the US Marine Corps, the US Coast Guard and on and on and on and then beyond that, we see the names of most of the major telecommunications players in Canada, in Scandinavia, in Denmark. According to their records they have over 2,000 key customers and therefore, the Clintons through their Director, his name is Jerry C Jones, have access to the entire back door of the Internet.” [1]

Thank you, Alexandra; I truly appreciate all you do.

Now to my observations

Hillary Clinton’s partner at the Rose Law Firm currently is the Class-1 director of the San Francisco company that now operates the backdoor surveillance of the Internet.   (2:35 minutes on the timeline)

There are over 2,000 customers and through the director, the Clintons have access to all the backdoors of the Internet.

Question: Can that be one of the dots why Hillary, as U.S. Secretary of State, had private servers in her home?

That explains why the Clintons never get prosecuted, per Mr. Gabriel (6:09 minutes on the timeline)

Comment: It would seem the Clintons have access to personal information that could compromise others and be used to blackmail them.

At 9:14 minutes “They grab the [digital computer] keys and go into their house to get whatever they need to use against the person to get what they want to use and that’s how they’ve stayed in power for so long,” paraphrasing Mr. McKibben.

At 11 minutes, “The Clintons are very well known for stealing pertinent documents,” per Mr. Gabriel

At 11:53 minutes, “Do you know how many Clintonites have died before going to the FBI?”  with their documents, per Mr. Gabriel

14:01 minutes, hear how China is involved in all this!

15 minutes “This programming most likely was done by Google.”  Mr. McKibben

17:39 minutes How they used Obama’s Executive Orders to go after Trump. Mr. Gabriel

23 minutes The attacks on our intellectual property during the Obama administration were by China. The Russians were stealing nothing!

27 minutes “Hillary had the keys to everything, so she hacked the DNC herself!” Mr. McKibben

28:18 minutes “The fact that Trump had no dirt.” Mr. Gabriel   Plus WikiLeaks discussed

28:52 minutes “Then the FBI did an investigation on Trump and could find nothing.”  Mr. Gabriel

29 minutes   Uranium One introduced, and how they realized Hillary will not be elected because of that. Mr. Gabriel

29:16 minutes “Comey and his gang were in full fledge with the Obama administration creating the Russian dossier.” Mr. Gabriel

29:34 minutes   All of Congress compromised by the personal data Hillary and her cohorts got on members using the backdoor keys.

31 minutes Whistleblowers discussed and what happens to them because of the backdoor hacking.

32:38 minutes   “Every single voting machine is controlled by foreign interest or people like…” Mr. Gabriel

34:50 minutes   Obama’s Executive Orders were to be able to go after Trump and his assets.  Mr. Gabriel

38:20 minutes   If any digital theft is going on anywhere even in the mainstream media, tell Trump and he will do something about it.  Mr. Gabriel

42:57 minutes   It’s been possible because of the digital queen, Hillary Clinton.  Mr. Gabriel

43:20 minutes Proof of those creating the Russian dossier and they are named.  Mr. Gabriel

44:06 minutes   This is proof. The entire senior echelon of the federal government is corrupted and in Hillary Clinton’s hands.  And this proves it.  Mr. McKibben

44:47 minutes “All the voting machines are compromised by this system.” Mr. McKibben

45:50 to 49 minutes   One of the major headquarters for this operation is in Washington, DC, plus discloses where it is…and taxpayers are paying to maintain it.   Mr. McKibben

50:20 to 53:35 minutes The apparent conclusions of how the controlling Hillary Clinton rules over the keys to the backdoors on the Internet …. Gabriel and McKibben

After listening to this mind-blowing discussion, voters, Congress and all federal agencies have a lot to reconsider, but more importantly sort out, if we as a country are to continue on as a free Constitutional Republic.