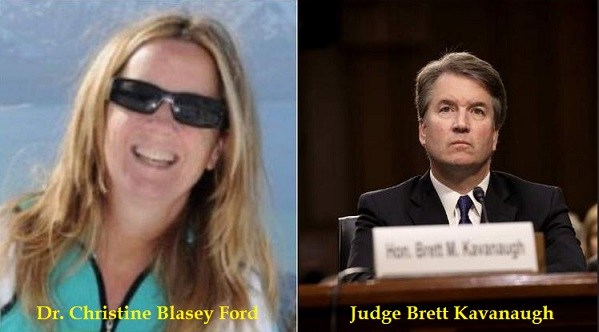 Ricki L. Seidman, 63, is a longtime Democrat Party cadre and a former Clinton administration official (Assistant to the President; Deputy Communications Director). She also actively worked against the Supreme Court nominations of  Robert Bork (1987) and Clarence Thomas (1990), and prepped Anita Hill before she testified before the Senate, claiming she had been sexually harassed by Thomas. Seidman was instrumental in getting the Anita Hill story made into a HBO television series.

From September 4 to 7, 2018, the Senate conducted hearings on Kavanaugh’s nomination.

On September 12, 2018, the day that the Senate Judiciary Committee was scheduled to vote on Kavanaugh’s nomination, Sen. Dianne Feinstein (D-CA), the top Democrat on the committee whose personal driver of 20 years is a Chinese spy, blocked the vote by forwarding to the Justice Department an anonymously-written letter, dated July 30, which accuses Kavanaugh of “sexual misconduct” with an unnamed woman when they were both high school students 36 years ago.

Four days later on Sept. 16, the author of the letter went public and identified herself as Christine Blasey Ford, 51, a research psychologist at Palo Alto University in northern California.

On Sept. 20, 2018, The Hill reported that Christine Ford had hired Ricki Seidman to be her political adviser to help her navigate a potential hearing in front of the Senate Judiciary Committee. Seidman confirmed her role in an interview with Politico.

Now, an audio has surfaced of political operative Ricki Seidman plotting a strategy to defeat Judge Kavanaugh’s nomination. The audio was recorded sometime in July 2018.

The audio begins with a female voice asking Seidman “what are the best tools that Progressives have to challenge” the Kavanaugh nomination.

Seidman responded by acknowledging that given the Republican majority in the Senate, it is not “extremely likely” that the Democrats can defeat Kavanaugh’s nomination (beg. 0:34 mark):

“So, I will say at the outset that while I think that looking at the numbers in the Senate it’s not extremely likely that the nominee [Kavanaugh] can be defeated, I would absolutely withhold judgment as the process goes on, and I think that I would not reach any conclusion about the outcome in advance.”

Seidman then touts her experience of having worked “on one side or another” of Supreme Court nominations since William Rehnquist, which is hard to believe because the Senate confirmed Rehnquist’s nomination in December 1971 when Seidman was 16-17 years old.

“I think that the way in which ultimately the Kavanaugh nomination needs to be approached is understanding what that standard is and the fact that Kavanaugh doesn’t meet the definition. I worry a little bit about, um, I think in this initial period, my sense is that everyone still scurrying to figure this out, and in terms of the groups that care about the issues, Justice Kennedy’s [resignation] announcement was a surprise and caught most — not everyone — people flat-footed, and the [Trump] administration knows this and that is partly why there’s a rush to nominate someone so quickly. I actually think that Kavanaugh was likely already chosen at the point that Kennedy would resign and that there was a nice show of considering people, for the White House’s political reasons.

But I do think that over the coming days and weeks, there will be a strategy that will emerge, and I think it’s possible that that strategy might ultimately defeat the nominee [Kavanaugh]….”

Then Seidman points out that Kavanaugh’s problem is the absence of women among his endorsers (5:30 mark):

Seidman acknowledges that only two Republicans would likely vote against Kavanaugh — Senators Susan Collins and Lisa Murkowski. Seidman calls that “something that we have to get beyond” (7:50 mark).