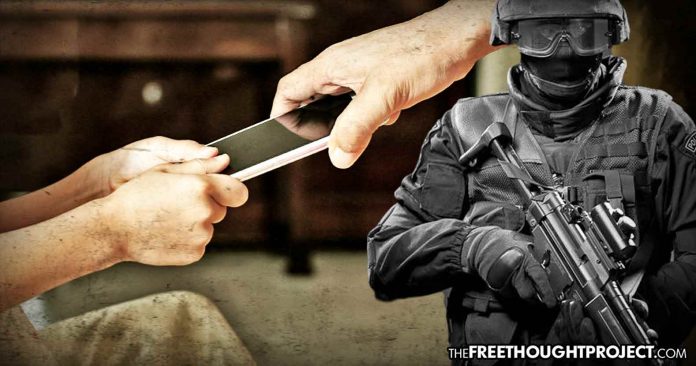 A Michigan mother was arrested after she took away her daughter’s cell phone. The mother’s individual decision to discipline her child by taking her phone away was followed by her prompt arrest.

Jodie May did what classroom teachers do every day across America. But we’ve never reported a story where a teacher, a representative of the state, has ever been arrested and charged for effecting discipline in the classroom. But when May tried to do the same thing with her teenage daughter, she was charged with misdemeanor theft.

May was arrested on May 12, the day before Mother’s Day, and was breastfeeding her 1-month-old newborn when Ottawa County deputies arrived at her door to let her know she was being arrested for taking her daughter’s phone away. Incredulously, the police state goons had no problem separating a mother from her nursing toddler.

He had told me that he was going to arrest me, and I asked him if I could turn myself in on that Monday by myself, that I had a new baby. She wasn’t taking the bottle yet.

Denying her request the officers placed her into a holding cell where she was jailed for two hours before being released on $200 bail.

The controversy began in April when May took her daughter’s phone away from her. Her ex-husband claimed it was his, and filed a police report alleging May stole his phone away from his daughter. But May contended all along the phone was a Christmas gift to the daughter and belonged exclusively to the teen.

May fought the charges, taking the case all the way to trial, where, moments after the trial began, the assistant district attorney admitted the phone belonged to the teen. Fortunately for May, this week, the judge dismissed the charges against the mother and released her as a free woman. But not before causing massive chaos in the mother’s life.

May cannot believe the case against her even made it to trial. She told reporters:

I would like answers on why it got so far and how it got this far, where this happened within my home. I’m disciplining my child, then I’m being the one handcuffed…I believe the prosecutor knew the whole time [the phone was her daughters] It was an easy question to have answered.

The Michigan mother will continue to scratch her head and question how it all happened but we at TFTP already know the answer to the question. It’s called the omnipotent police state.

The so-called authorities have all the power and the people have none, at least not until court cases play all the way out. May can now sue for unlawful arrest. She’ll probably win. And the Michigan taxpayer will have to foot the bill for the judgement against police in a federal civil rights lawsuit.

Americans now live in a state where police can shoot and kill people and charge others with their murder, can raid the wrong home and kill people with impunity, can shoot unarmed compliant suspects and get away with it, shut down lemonade stands, arrest people with medical marijuana cards for using their medicine, and now arrest mothers for taking their children’s cell phones away.