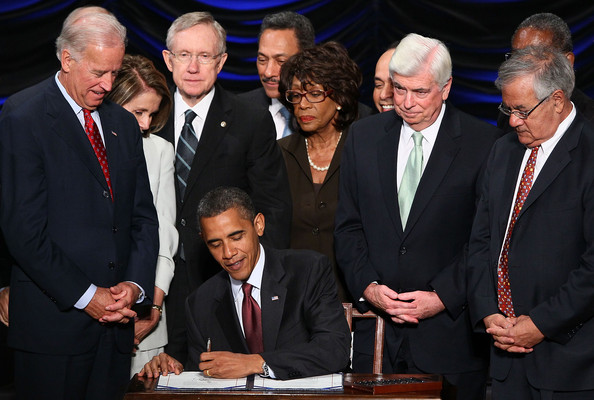 On Saturday, the Human Rights Campaign, the country’s top gay rights lobby, held its 22nd annual dinner. Top speakers included Joe Biden, who bemoaned the lack of acceptance for gay people, Anne Hathaway, who shrieked, “Let’s tear this world apart and build a better one”, and Obama’s Attorney General, Eric Holder, who declared, “The age of bullies and bigots is not fully behind us”.

Holder would know. He was last seen posing with Louis Farrakhan at Aretha Franklin’s funeral. The leader of the Nation of Islam is both a bigot and a bully. He also loathes gay people.

Holder’s boss, Barack Obama, had been caught posing with Farrakhan at a Congressional Black Caucus event. And multiple CBC members have refused to condemn Farrakhan. They include Rep. Danny Davis, who had called Farrakhan an “outstanding human being”. They also include Rep. Maxine Waters.

On Friday, the day before, Rep. Maxine Waters had received the National Leadership Award from the National Newspaper Publishers Association.

The NNPA is an association of black papers that includes Final Call, the paper of Farrakhan and the Nation of Islam. Ford, GM, AT&T, Pfizer, AARP, Comcast, and the Bill and Melinda Gates Foundation act as partners and sponsors of an association that includes a notorious racist and anti-Semitic hate group.

Ford had spent a long time trying to live down its past association with another anti-Semitic paper, The Dearborn Independent, only to end up associated with yet another violently anti-Semitic publication.

The HRC has its own extensive relationship with Ford. It has nothing to say about Ford’s NNPA role.

At the 2018 Black Press conference sponsored by the NNPA, which had previously honored Senator Kamala Harris, the First Place Feature Writing Award went to a Final Call article, “The Feminization of Black Men” which quoted Farrakhan’s claims that drugs were being used to turn black men gay.

“He can make you think you’re a homosexual, he’s feminizing the Black man,” the racist leader declared. “You are the guinea lambs of White experimentation.”

“We now have feminization and homosexual behaviors being normalized in the Black community,” another of the article’s experts warned.

The NNPA awarded piece then went on to quote Nation of Islam minister Wesley Muhammad, whose version of the ‘Pot Plot’ warned that that the government and the Jews were using pot to make black men gay.

“It’s the US government and the Synagogue of Satan’s scheme to use manipulated marijuana along with other drugs to de-masculinize and feminize the black male of America,” Wesley warned at a mosque. “While it cannot be said that the Pot Plot that we are exposing is a strictly Jewish conspiracy, the Synagogue of Satan is the key player.”

Last month, Mary Beth Maxwell was forced to resign as the head of the education arm of the Human Rights Campaign for using the ‘N-word’ twice. But nobody at the Congressional Black Caucus or the NNPA is resigning. Not for the racism, the anti-Semitism or the homophobia.

The NNPA’s tolerance for both shouldn’t be surprising. It’s headed by Ben Chavis, a former NAACP boss and former member of the Nation of Islam, who had tried to steer the NAACP closer to Farrakhan.

At the HRC dinner, Anne Hathaway denounced white and straight privilege, attacking the “myth” that “gayness orbits around straightness, transgender orbits around cisgender, and that all races orbit around whiteness.” The tidy intersectional formula though doesn’t remotely reflect reality.

Identity politics is a coalition of separate identity resentments united only by loathing the construct of an oppressive majority, of whiteness, straightness and whatever othering formula the left is offering this week. Once you get past those common bonds of bigotry, of hating the same people, unity falls apart.

The attendees at the National Newspaper Publishers Association and the Congressional Black Caucus dinner move in the same Democrat orbits, but have very different views of each other. Eric Holder goes from rubbing shoulders with Louis Farrakhan to pontificating for wealthy gay donors at the HRC dinner.

Wells Fargo and Pfizer sponsor both the NNPA and the HRC, funding both celebrations of gayness and of the promotion of conspiracy theories about drug companies, governments and Jews conspiring to make black men gay. It’s not just individuals, but politicians and major corporations on the ‘down-low’, appealing separately to wealthy gay men and the black political allies of an anti-gay hate group.

Nobody speaks about the essential contradictions of a movement that includes both militant denunciations of homophobia at the HRC dinner and the NNPA’s support for Farrakhan’s militant denunciations of homosexuality. The friction between gay nationalism and black nationalism is just another of the many schizophrenic frictions of the Democrats in the dark age of identity politics.

No matter how much the left wants to unify pride and identity politics nationalism around hating an artificial idea of straight white men, a multicultural society is one with a multitude of hatreds. The more diverse America becomes, the more diverse the varied hatreds of the rainbow coalition will get.

The left killed liberalism, tolerance and coexistence. What’s waiting in the wings is Farrakhan

Farrakhan’s message of “empowerment” is the same as Hitler’s. It lays out a vision of a naturally superior people being oppressed by their racial inferiors through trickery and cunning. The NNPA awarded an article whose rhetoric echoes Nazi Germany’s Goebbels almost word for word.

The black empowerment of the Nation of Islam that the left praised is based on racism, dehumanization and power. When Obama, Holder, leaders of the Women’s March, and members of the Congressional Black Caucus embrace Farrakhan, they’re showing their own hate. And the farce of identity politics.

When Eric Holder flirts with black nationalists and gay rights activists, whom does he go home with at night? Democrats running for the White House inevitably head to New York City to meet with Al Sharpton who once ranted about, “Greek homos”, and then condemn homophobia. Maxine Waters plays aunt to the #resistance of white lefties, but hugs Louis Farrakhan and collects an award from a press association that includes Farrakhan’s Final Call, with its claims of a plot to make black men gay.

The Democrats are all on the ‘down-low’, flirting with bigots and then condemning bigotry.

Corporations throw money at both the NNPA and the HRC, and any other diverse dinner they can find. The media could expose the contradictions, but it chooses to ignore principles for political expediency.

The schizoid nature of identity politics is turning the Democrats into bigots who scream about bigotry.

And the more they scream, the more bigoted they are.

Meanwhile the NNPA, an organization that includes a racist paper put out by a racist hate group, is sponsored by Ford, GM, Bill Gates, AT&T, MillerCoors, the AARP, Coca Cola, Macy’s, Toyota, VW, Pfizer, Wells Fargo and many other major corporations and organizations. Racism is big business once again.

Major corporations have gotten behind racism and anti-Semitism because the Democrats have.