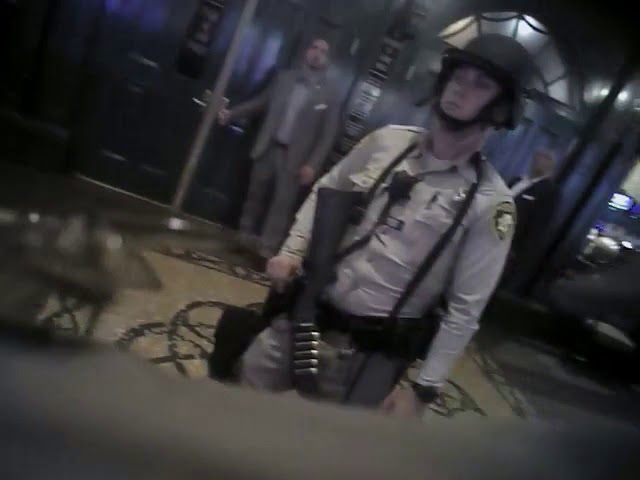 Officer-worn body camera footage from the night of the 1 October Las Vegas shooting suggests there may have been a number of deceased victims on the street outside New York New York who died in the attack.

Although the location of the dead bodies is not mentioned in the video, it seems the officer may be suggesting that the bodies are just outside the building in which he is posted up in.

At about 3:12 into the video, the officer can be seen and heard voice-texting an acquaintance using his Apple Watch.

“I’m at the New York New York, right now,” he said. “There are tons of dead bodies on the street.”

A man calls 9-1-1 to report that “numerous people saw” a shooter “coming down the escalator” at the New York New York. The caller, who was sheltered-in-place in a storage room on the casino floor with 8 others at the time, told the operator that it all happened just a few minutes before he called.

Keep in mind, the shooting at the venue ended at 10:15 pm and this occurred around 11:04 pm almost an hour later.

A front desk worker at the New York New York told a 9-1-1 emergency call center operator that “there was some shooting going on across the street at the Excalibur” which caused people to flood her way.

Caller tells 9-1-1: “We are stuck in the New York New York we don’t know if it’s safe to leave — we saw bodies on the floor in the Zumanity theater.”

The New York New York Hotel and Casino is eight-tenths of a mile away from the Mandalay Bay.

Were “tons of dead bodies” out “on the street” by the New York New York on the night of the attack?

Were "tons of dead bodies" out "on the street" by the New York New York on the night of the #1October attack? #LasVegasShooting