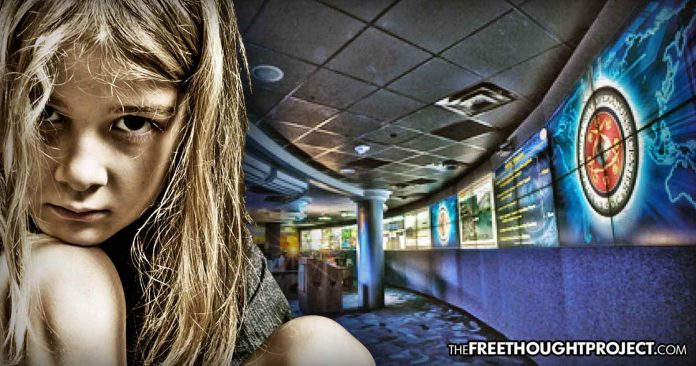 The United States House of Representatives is preparing to vote on a bill that looks like legislation that focuses on combating human trafficking on the surface—but some liberty-minded lawmakers are warning that the bill is using language from the PATRIOT Act to increase unconstitutional government spying.

The Empowering Financial Institutions to Fight Human Trafficking Act of 2018, H.R. 6729, states that its purpose is “to allow nonprofit organizations to register with the Secretary of the Treasury and share information on activities that may involve human trafficking or money laundering with financial institutions and regulatory authorities, under a safe harbor that offers protections from liability.”

However, while the goal of the bill claims to be to help institutions and authorities “better identify and report potential human trafficking or money laundering activities,” Michigan Rep. Justin Amash took to Twitter to argue that the legislation actually has a much more sinister objective.

Amash said he believes H.R. 6729 is “a disguised effort to expand the Patriot Act. GOP leaders put ‘Fight Human Trafficking’ in the title to conceal the bill’s true purpose: to give the government more power to unconstitutionally spy on law-abiding Americans without a warrant.”

One of the upcoming bills, #HR6729, is a disguised effort to expand the #PatriotAct. GOP leaders put “Fight Human Trafficking” in the title to conceal the bill’s true purpose: to give the government more power to unconstitutionally spy on law-abiding Americans without a warrant. https://t.co/hmkEEw1f6l

In the past, Rep. Amash has been a vocal opponent of legislation that threatens the Fourth Amendment by letting the FBI spy on innocent Americans without a warrant and letting government agencies raid private property without a warrant.

While legislation that claims to fight human trafficking seems like an effort that would easily gain approval and attention, critics warn that there is much more beyond the surface.

This bill was introduced by Missouri Rep. Ann Wagner—the same sponsor behind the controversial Fight Online Sex Trafficking Act of 2018 (FOSTA) that became law earlier this year. As a report from Reason noted:

The deceptively named the ‘Empowering Financial Institutions to Fight Human Trafficking Act’ of 2018—is the latest in a long line of assaults on civil liberties disguised as attacks on the biggest crime panic of the decade, sex trafficking. Wagner alone brought us the SAVE Act in 2015 and FOSTA in 2018, both of which take aim at online anonymity, web publishing, social media, sex workers, and free speech under the guise of saving children from ‘modern slavery.’

Specifically, H.R. 6729 would allow financial institutions, federal regulatory bodies, nonprofit organizations, and law enforcement to share customer bank records between them without running afoul of rules regarding consumer privacy and without opening themselves up to lawsuits. Ostensibly, this would be done ‘in order to better identify and report potential human trafficking or money laundering activities.’”

As The Free Thought Project has reported, bills like FOSTA and its sister, the Stop Enabling Sex Traffickers Act (SESTA), have actually done more harm than good for both sex workers and victims of human trafficking because they “removed legal protections that website operators had in cases where third parties published illegal material on their servers.”

As a result, the Sex Workers Outreach Project noted that “Attempting to deter sex workers from their jobs by removing advertising and screening platforms is akin to pushing sex work ‘underground’ and in the streets—where workers have less power in relation to their clients and where sex workers are at greater risk of arrest and police violence.”

The Empowering Financial Institutions to Fight Human Trafficking Act appears to be the same kind of bill, and in addition to failing to include requirements for due process, the text of the bill states that there is also a “no good faith requirement.”

Therefore, a nonprofit organization, financial institution or law enforcement agency that “transmits or shares information … shall not be required to demonstrate that such transmission or sharing was made on a good faith basis in order to receive the benefit of the safe harbor.”

It gives police officers an alarming amount of power to dig into the financial records of someone they know on a personal level, and it gives other institutions and authorities access to financial records that they want to use for political reasons—and the only thing they have to claim is that they thought there was a chance the suspected individual they were targeting was involved in “human trafficking.”

The United States government has a history of convincing Americans to give up their liberties in the name of “security,” even though they only become more unsafe as a result. The text of the latest bill follows the same trend, and the report from Reason noted that it is actually reminiscent of the original PATRIOT Act:

“The language echoes Section 314 of the PATRIOT Act, which covers ‘matters specifically related to the finances of terrorist groups, the means by which terrorist groups transfer funds around the world and within the United States, including through the use of charitable organizations, nonprofit organizations, and nongovernmental organizations, and the extent to which financial institutions in the United States are unwittingly involved in such finances and the extent to which such institutions are at risk as a result.”

This time, instead of attempting to persuade Americans to give up their liberties in exchange for safety from boogeyman terrorists, the government is trying to convince Americans that it will help to combat human trafficking. But the reality is that if the newfound “War on Human Trafficking” turns out to be anything like the “War on Terror,” then Americans are in for a wake up call.