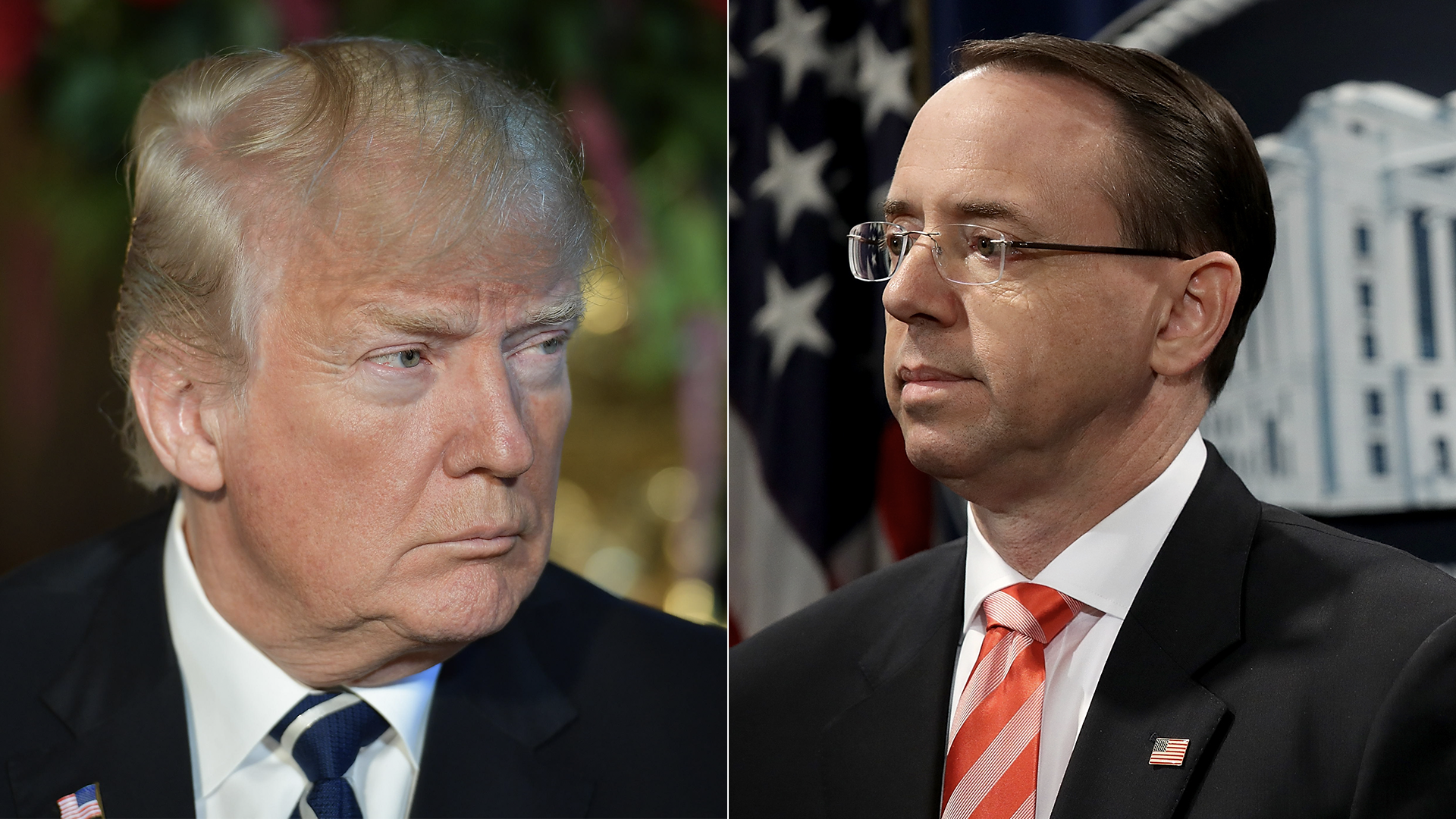 Rod Rosenstein, 53, a Republican, is the rat-face whom President Trump, on February 1, 2017, nominated to be the Justice Department’s Deputy Attorney General, and whom the Senate quickly confirmed on April 25, 2017.

The next month, in May 2017, Rosenstein authored a memo which President Trump said was the basis of his decision to dismiss FBI Director James Comey. Rosenstein then appointed special counsel Robert Mueller to investigate alleged ties between the Trump campaign and Russia during the 2016 election and related matters. Rosenstein also approved the raids on the home, office and hotel room of Trump attorney Michael Cohen.

The Deputy Attorney General is a political appointee of the President of the United States and takes office after confirmation by the Senate. According to the DOJ website:

Five days ago on Sept. 21, The New York Times reported that shortly after the dismissal of Comey, Rosenstein grew concerned about Trump’s fitness for office. Rosenstein suggested he could wear a wire to secretly tape conversations between himself and Trump, then use those recordings against the President by  invoking the 25th Amendment to remove Trump from office. The 25th Amendment provides for the removal of a sitting president if he or she is judged unfit to carry out the duties of the office.

Rosenstein strongly denied it, saying he was just being sarcastic in his reference to taping Trump. In response, Trump said he wasn’t sure what the deputy AG’s fate would be.

Two days ago, conservatives got all elated by talk of Rosenstein having resigned or being fired:

But the chatter all came to nothing. We are told that Rosenstein had not resigned and that he will meet with President Trump tomorrow.

That Rosenstein still has a job despite his plotting against Trump adds to conservatives’ frustration. Many of us repeatedly have asked why Trump hasn’t  and seemingly won’t fire swamp creatures like Rosenstein.

Bob Fredericks of the New York Post briefly explained why:

Under the Federal Vacancies Reform Act, Trump has the power to appoint an acting AG if it’s a resignation. If he is fired, the process is murkier and governed by federal employment laws.

So I looked into this. Here is what I found.

In an article for Politifact, Angie Drobnic Holan describes the process for firing or even disciplining federal government workers as “cumbersome” and “difficult”.

Paul Light, a professor of public service at New York University, said that out of a federal workforce of 1.86 million, “Very few federal employees — in the hundreds, not the thousands — are ever fired on the basis of poor performance. If you want to fire an employee, you’re taking on a task that is very intense and difficult, and biased in favor of protecting employees, and it can take a year or more to complete.”

John Palguta of the Partnership for Public Service, a nonprofit that advocates for an improved federal workforce, said that when an employee is fired, there are a number of appeals processes available to fight a termination. Some of those processes probably could be streamlined, while keeping in place rules designed to protect employees from partisan politics because “It’s not supposed to be easy to fire federal workers for the wrong reasons.”

In 1999, when the U.S. Office of Personnel Management (OPM) undertook a study of poor-performing federal employees, the researchers had a difficult time even finding a statistically-significant sample of supervisors who had attempted to take action against a poor performer. The 42 supervisors whom the researchers found said it was hard to fire workers because of a lack of support from upper management, varying quality in technical guidance for completing the process, and reluctance to devote the time and energy needed to complete the cumbersome process. Many bosses got discouraged and gave up. The OPM report said:

Interviewees found the investment of time and energy required over an extremely long period to be daunting. This was compounded by the stress resulting from the employee’s counter-charges, grievances, accusations, appeals, general hostility and attempts to subvert the supervisor. One described the documentation required as ‘horrendous.’

In contrast, if a federal employee who is a presidential appointee resigns or quits, the President immediately can appoint a person to the vacated office “in an acting capacity” until a replacement candidate is nominated and confirmed.

According to the Federal Vacancies Reform Act of 1998, if an officer of an executive government agency that requires presidential appointment with Senate confirmation (such as deputy attorney general of the Justice Department) dies, resigns, or is otherwise unable to perform office functions, the President is authorized to appoint a person temporarily to serve in the vacated office in an acting capacity for a period of 150 days, during which time the President is expected to nominate a replacement, with the advice and consent of the Senate.

The Federal Vacancies Reform Act makes no mention of what happens when an officer of an executive government agency that requires presidential appointment with Senate confirmation is fired. But common sense says that the very fact that Congress enacted this Act, to address cases when the federal appointee resigns, presumes that the procedure would be different if the appointee is fired.