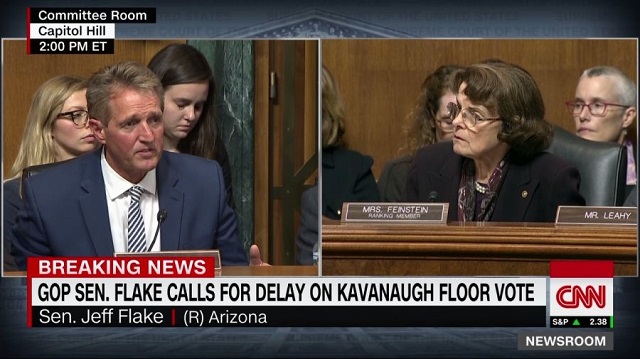 1:55 PM: Senate Judiciary Committee votes Kavanaugh nomination out of committee (11-10). Flake says he will be only comfortable moving on the floor with the one-week investigation/due diligence. Grassley and Graham note that they don’t control what happens on the floor

MORE: Sen. Jeff Flake (R-AZ) voted 'yea' to move the process forward, but said he will not vote in favor of Kavanaugh being confirmed in a full floor vote unless he sees an FBI investigation of up to one week into the allegations of Christine Blasey Ford https://t.co/ioZf8jiXvI pic.twitter.com/4PB9dNZpBc

1:51 PM: Grassley, citing point of personal privilege, calls on Flake to speak before the vote. Flake says he thinks it would be proper to delay the floor vote for up to one week to enable the FBI to due an investigation, limited to time and scope to no more than one week. He says he will vote to advance the vote to the floor with that understanding.

He said he did this to achieve some sort of unity with the Democrats, which is pointless considering no Democrats except possibly West Virginia’s Joe Manchin are likely to vote for Kavanaugh.

Here’s his exact quote from CNN:

I’m simply stating the discussion that we had between us all is that I would hope and I think we had some agreement before that the Democrats who have been — I think — justifiably uncomfortable moving ahead, could publicly, in an effort to bring this country together, say that we would feel better…. I’m not expecting them to vote yes… but not to complain that an FBI investigation has not occurred. This is what I’m trying to do. This country is being ripped apart here. We’ve got to make sure that we do due diligence.

So here’s where things stand, as far as we can tell:

– Brett Kavanaugh’s nomination has been approved. It now heads to the floor.
– Sen. Jeff Flake voted yes on the grounds that he would get support to request a floor vote delay and a one week FBI investigation.
– However, Flake has been given NO commitment by Senate Majority Leader Mitch McConnell.
– If McConnell moves forward without that investigation, Flake will vote against Kavanaugh.
– Whether this happens or not rests with senators such as Lisa Murkowski and Susan Collins, who have not announced how they plan to vote.

GOP Sen. Lindsey Graham says he doesn't think the delay is necessary, but "this is democracy." Graham adds, "If Jeff feels better about it, I'll feel better about it" https://t.co/8TKfVFyZJC pic.twitter.com/xJxq9THmlk

President Trump says Christine Blasey Ford's testimony was "very compelling" and Brett Kavanaugh's was "something that I haven't seen before. It was incredible" pic.twitter.com/Rm1qiBg4Zd

When asked if he has thought of a replacement for his Supreme Court nominee Brett Kavanaugh, Trump says: "Not even a little bit" pic.twitter.com/Y9fFpEnXNX

Trump says he does not have a message for key Republican Sens. Lisa Murkowski and Susan Collins other than "they have to do what they think is right." Trump adds that he will rely on the Senate Judiciary Committee to decide the next steps on Kavanaugh. pic.twitter.com/3mY3pury4K