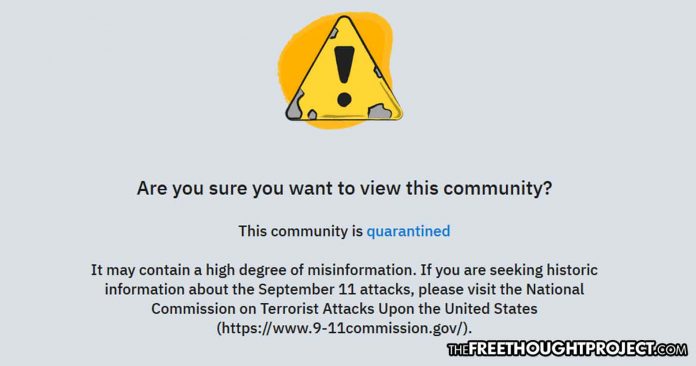 A highly popular subreddit devoted to posting information which proposed information outside the official narrative to 9/11 has been “Quarantined” by the Reddit Administrators. The community has effectively been cut off from the rest of the platform and anyone who wishes to view its contents are forced to go through a checkpoint while being redirected to a government website.

On Thursday, the subreddit r/911truth was placed under a Reddit Quarantine. The Reddit Administrators claimed that the subreddit posts misinformation and then directed people seeking information on 9/11 to the official government website.

It may contain a high degree of misinformation. If you are seeking historic information about the September 11 attacks, please visit the National Commission on Terrorist Attacks Upon the United States (https://www.9-11commission.gov/).

According to Reddit, communities are placed under quarantine to prevent others from accidentally stumbling upon this information. Reddit, like most other social media platforms has begun to control the flow of information and crowning themselves the arbiters of truth.

The purpose of quarantining a community is to prevent its content from being accidentally viewed by those who do not knowingly wish to do so, or viewed without appropriate context. Quarantined subreddits and their subscribers are still fully obliged to abide by Reddit’s Content Policy and remain subject to enforcement measures.

Quarantined communities will display a warning that requires users to explicitly opt-in to viewing the content. They generate no revenue, do not appear in non-subscription-based feeds (eg Popular), and are not included in search or recommendations. Reddit may also enforce a number of additional product restrictions that exist currently or as they may develop in the future (eg removing custom styling tools).

The idea of Reddit redirecting people away from this open source subreddit to the official 9/11 Commission website is as ironic as it is ominous— as the 9/11 commission admitted it was railroaded in their own investigation and it is full of controversy.

Not only were the commissioners given extremely limited funds to conduct their investigation, but they were also met with dead ends in almost every direction.

Questioning the government is how we maintain freedom and attempt to seek truth. When social media giants like Reddit quarantine this information and claim that there is only one official source for it, and that source is the government, they are complicit in deceiving the citizens.

It is an indisputable fact that the United States government lies repeatedly to the citizens of the United States. They have been caught countless times deceiving the American people and Reddit wants you to get your information solely from them in regards to one of the most controversial and deadliest terrorist attacks on American soil. What’s more, the government themselves has admitted that their path to investigate 9/11 was tainted with corruption and cover-ups and the government was already exposed lying about it.

FBI agents have come forward claiming they were railroaded by the CIA when they had information that the attack was going to take place—claiming it was preventable. Thousands of architects and engineershave come forward challenging the government’s account of why the three building collapsed that day. And, the US government admitted to covering up Saudi Arabia’s role in 9/11. These and many other reasons are why subreddits like r/9/11truth exist and are necessary.

Is there misinformation out there in regards to 9/11? Undoubtedly. But if Reddit claims that the only arbiters of truth are the biggest proven liars in the world, then they are doing a disservice to their users and should be exposed for it. Please share this article with your friends and family to let them know what Reddit thinks about questioning the government.