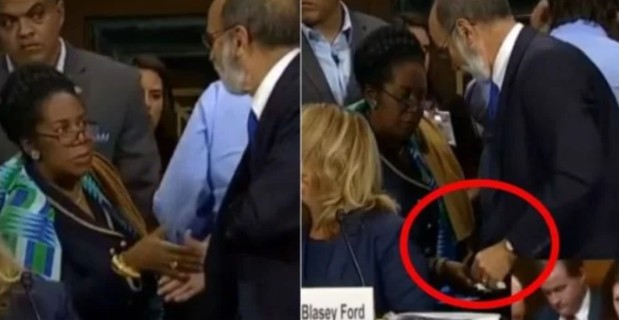 Speculation raged after Rep. Sheila Jackson Lee was seen on camera handing an envelope to Christine Blasey Ford’s lawyer during a break in Ford’s testimony Thursday.

Video showed the Democrat Congresswoman passing an envelope to Counsel Michael Bromwich, who then put the letter in his jacket pocket.

Sheila Jackson Lee what was that? pic.twitter.com/yWPyrelIs8

This prompted many conservatives on Twitter to speculate what was in the envelope.

“What did @JacksonLeeTX18 pass to Ford’s attorney?” asked Laura Ingraham.

Others suggested that the envelope was some kind of pay off, despite the fact that Bromwich and Ford’s other counsel were working for her pro bono.

Now we know who paid for the polygraph. pic.twitter.com/o2aTq8DYpM

However, the issue appeared to have an innocent explanation.