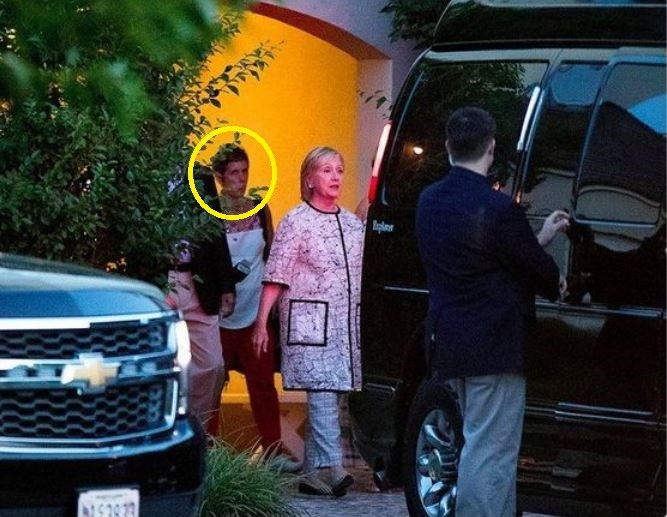 During the 2016 presidential campaign on August 21, rabid anti-Trumper Cher hosted a fundraiser for Hillary Clinton at the Pilgrim Monument & Museum in Provincetown, Cape Cod.

The fundraiser, attended by a cheering crowd of about 1,000 useful idiots, netted $1.5 million for Hillary’s campaign coffers. (Cape Cod Times)

Below is a pic of Hillary, dressed in a hospital-gownlike smock, leaving the event.

Note the dark-haired woman behind Hillary.

In 2016, we’d assumed the woman was just some anonymous Hillary flunky.

Debra S. Katz is a civil rights and employment lawyer and a founding partner of Katz, Marshall & Banks in Washington, DC. Katz was raised in a Jewish family on Long Island…. Katz represents Christine Blasey Ford, professor at Palo Alto University, who in September 2018 alleged that U.S. Supreme Court nominee Brett Kavanaugh sexually assaulted her in the early 1980s, when they were both teenagers.

According to Slate, Debra Katz “is known for her work representing sexual harassment and abuse victims”. Both Katz and Ford’s other attorney, Michael Bromwich (whom Wikipedia describes as also “raised in a Jewish family”) are representing the Kavanaugh accuser pro bono, despite the fact that Christine Blasey Ford has received more than half a million ($528,315) in GoFundMedonations.

What both Slate and Wikipedia neglected to tell us is that Debra Katz is also a Hillary Clinton operative. In Katz, we see the hidden hand of Hillary in the ongoing machinations to take down Judge Brett Kavanaugh.

Hillary Clinton had done this before. In 2016, her pal, Esprit Clothing founder Susie Tompkins Buell, paid $500,000 in an unsuccessful effort to fund women accusing Trump of sexual misconduct. (Fox News)