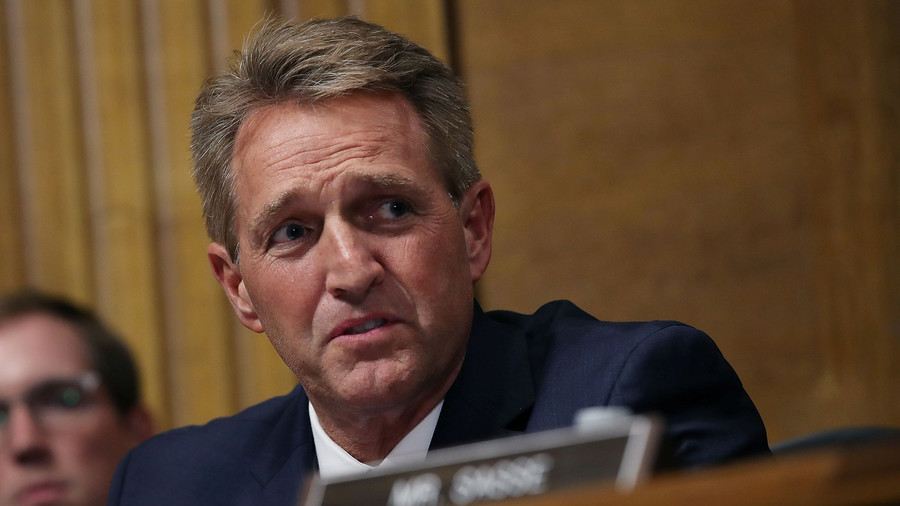 Sen. Jeff Flake (R-Arizona), the key figure behind the White House’s decision to reopen an FBI investigation into SCOTUS nominee Brett Kavanaugh, has said he would have not called for the probe if he hoped to get reelected.

Flake has been serving as a Senator for Arizona since 2013. In October last year, he announced that he would not by vying for the seat in the looming congressional elections in November.

In an interview to CBS’s “60 minutes” the outgoing senator admitted that he would not have risked his victory chances by siding with Senate Judicial Committee Democrats in calling for the FBI investigation into the sexual misconduct allegations against Kavanaugh, if he still wanted to keep his congressional job.

“Not a chance,” Flake admitted, adding that he would have had reason whatsoever to deviate from the party line.

The elevator incident was the turning moment that prompted him to join Democrats in their calls for the FBI probe, he said.

Midway through the Friday Senate Judicial Committee hearing,  Flake was cornered by women who said they were sexual assault survivors and pleaded with him to delay the Kavanaugh vote.

The lawmaker admitted that he was startled by the story of the woman who confronted him, saying he had a “feeling that this was history” and he made a decision on the spot.

“I don’t think anybody expected – you know, what happened on Friday to happen and I can’t say that I did either.”

When Senator Jeff Flake hit the pause button on the Judge Kavanaugh Supreme Court confirmation process, nobody was more surprised than he was. The season premiere of 60 Minutes starts at 7:30 ET/ 7PT.https://t.co/TaHAy3H1S6 pic.twitter.com/zKB8AHzwYd

Flake’s confession has triggered a torrent of angry responses from conservatives on Twitter, accusing the Senator of being a “coward” and a “weak person” who would choose high approval ratings over his constituents.

Flake: If I were running for reelection ‘not a chance’ I’d call for Kavanaugh investigation https://t.co/7haHq1dXYU

Confirms @JeffFlake is a REAL flake w/NO guts-integrity-principles. So much for his "Conservative With A Conscience" book & self-label

“Senator Flake, could you have done this if you were running for re-election?” “No, absolutely not.” This is where we are, a #twoparty, #zerosum political race to the bottom. No pretense of governing, just partisan warfare. Who cares about constituents—real people?! #letsbebetter

Watching 60 Minutes and @JeffFlake is the biggest pu$$y in America… Arizona get your $hit together, and do a better job when electing United States Senators… Y’all’s track record is egregious… #MAGA pic.twitter.com/mxlahQLhyk

Following Flake’s call for an FBI probe, US President Donald Trump ordered the agency to reopen the investigation that would be limited to one week. The decision drew criticism from Democrats, accusing the White House of an attempt to micromanage the investigation by limiting its scope.

On Sunday, White House Press Secretary Sarah Sanders denied the allegations that the administration has been interfering with the probe.

“We’re not micromanaging this process. It’s a Senate process. It has been from the beginning, and we’re letting the Senate continue to dictate what the terms look like,” Sanders said.

Trump also hit back against the allegations, while taking a swipe at Democrats, tweeting that “for them, it will never be enough.”

Wow! Just starting to hear the Democrats, who are only thinking Obstruct and Delay, are starting to put out the word that the “time” and “scope” of FBI looking into Judge Kavanaugh and witnesses is not enough. Hello! For them, it will never be enough – stay tuned and watch!