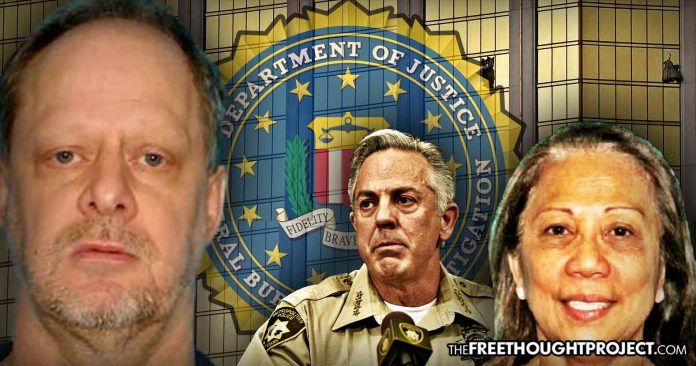 Las Vegas, NV — As of October 1st it has been one year since Stephen Paddock allegedly busted out the windows of his suite on the 32nd floor of the Mandalay Bay Casino Hotel and opened fire on concert goers below. In total, 58 people would be slaughtered and hundreds of others injured. Sadly, in 365 days and all the police state tactics and technology at their fingertips, investigators are still unable to even come close as to why Paddock did what he did.

The Vegas massacre, which is now referred to as 1 October, has only gotten stranger as things progress. Following the tragedy, law enforcement engaged in a series of narrative changes, deliberate blocking of information, and appear to be working directly with the casino to make sure Americans never know the entire truth.

For months after the shooting, the LVMPD refused to release any information. Only after they fought the release all the way to the state supreme court, and were handed down a ruling forcing them to release information, did they ever budge.

However, after the court forced them to release information on the October 1 massacre, the Las Vegas police department—in an insultingly futile attempt at transparency—has been randomly dumping information related to the shooting. In what appears to be a deliberate attempt to muddy the waters, much of the video released by the department has no time stamps and is provided without context.

Luckily, there are outlets like the Las Vegas Review-Journal who have been persistent in scrubbing the details of this case. However, because the mainstream media no longer reports on this information, it essentially gets buried upon its release. The Free Thought Project has compiled a list of five major questions — all of which were swept under the rug by the MSM — that still remain in regards to what actually took place on 1 October.

In August, a report surfaced suggesting that Stephan Paddock’s girlfriend, Marilou Danley could’ve been an FBI asset. According to a credit application, as reported by True Pundit, Danley listed the FBI as an employer.

According to the publicly available intelligence obtained from a consumer credit reporting bureau, Danley claimed she previously worked at the FBI. While anyone can certainly claim anyone else as an employer, according to True Pundit, they contacted the FBI who said their “bosses are concerned” over this revelation.

When contacted Friday, one FBI source said the Bureau “might have made payments to Danley but it is above my level,” the source said referring to access to the FBI’s confidential informant participant and payment records. The source said “bosses are concerned” with the new revelations about Danley’s financial relationship with the FBI.

In FBI speak, Danley could have been a paid asset. And ‘concerned’ means folks are getting ready to cover their own butts if payments were made to Danley either before or after the massacre.

Or Danley. If you can find her. It took the FBI days to locate her and interview her after the Mandalay Bay massacre.

Danley is an Australian national. She is not a U.S. citizen.

Of course this bombshell Intel is coming from FBI sources in the beltway, not the corrupt Las Vegas FBI field office headed by Aaron Rouse. The same FBI field office that has not been able to pinpoint a motive for the Oct. 1, 2017 massacre that killed 57 people.

Little wonder why the narrative doesn’t fit the crime if the person whose fingerprints are on the ammunition also happens to be on your FBI payroll.

Why is the mainstream media not reporting this? In a case that has been shrouded in mystery and narrative changes, the idea that the person closest to the suspect in the deadliest mass shooting in modern history, could possibly be an asset to the FBI, is chilling.

2. Officers seen on body camera footage cowering in fear as Paddock murdered people one floor above them

When Nikolas Cruz opened fire on students in a Parkland, Florida high school, it would later be revealed that the school resource officer cowered in fear instead of trying to stop the massacre. When this was discovered, news media across the country reported on it and the officer subsequently became known as the “Coward of Broward.”

However, when similar footage showed Vegas police officers cowering in fear as Paddock mowed down concert goers, this barely registered as blip in the media.

The damning video puts officer Cordell Hendrex on location and only one floor below Paddock during the shooting. Hendrex and his rookie partner are seen on camera walking down the hall of the 31st floor as Paddock murders people on the ground below.

“Holy f**k,” Hendrex says when he hears the sound of shots above him. Hendrex could’ve run to the stairs, gone up a single floor and engaged Paddock and saved countless lives. Instead, he called everyone back and cowered in fear. Where are the calls for Hendrex to be fired? Where are the reports in the mainstream about him standing down?

3. Paddock Reportedly Warned His Brain was ‘Hacked’ and He Was Under Gov’t Control

Earlier this year, shocking information surfaced that went largely ignored by the mainstream media. The report entails testimony from one of Paddock’s high-priced escorts who blew the whistle on how a prostitute who met with the deranged shooter just before the massacre went missing and noted how Paddock thought he was under the control of the government.

The escort was reported missing by her boyfriend just after the shooting and a former escort who once dated Paddock spoke out about the sheer insanity involved in this case.

“She was telling girls after work that she was scared something would happen to her,” claimed former escort Mikaela, whose full name was withheld to protect her identity according to Radar Online. “She was booked the day before or the day of the shooting before she disappeared.”

According to her testimony, Paddock claimed to be a government experiment.

“There’s messages where Stephen is telling her he’s a government experiment and that they are listening to everything he says and does, and they can hack into his brain and take over,”Mikaela said.

This information was simply ignored by the media and still is to this day, why is that?

In August, the arms dealer who admitted to selling Paddock his ammunition for the massacre was indicted. Douglas Haig was charged with a single count of “engaging in the business of manufacturing ammunition without a license.”

What makes his arrest so noteworthy is the fact that emails released by the FBI suggest Paddock may have been an arms dealer as well.

As The Free Thought Project reported last year, a series of unsealed court documents gave insight into Paddocks communications in the months leading up to the shooting, and revealed that he apparently referred to himself as some kind of arms dealer:

In the first message, Paddock claimed that the recipient would have the opportunity to try out the weapons before they purchased them. He then wrote “We have huge selection,” indicating that he was not working alone, and he said he was located “in the Las Vegas area.”

the email exchanges released by the FBI indicate that Paddock was presenting himself as some sort of arms dealer, sending an email that said, “for a thrill try out bumpfire ar’s with a 100 round magazine.”

Again, although the original emails made it into the mainstream briefly, the question remains as to who Paddock was selling arms to, and is that why he had so much ammunition in his hotel room?

5. Vegas police seen on video being instructed to turn off their body cameras

In June, in part of the random dumping of information by the LVMPD, video footage was discovered which showed officers being told to turn off their body cameras.

According to the chatter captured on the video, the strike team is prepping to enter the hotel.

As police stand in line waiting to enter the hotel, multiple body cameras show a female officer walking down the rows, instructing the officers to turn off their cameras.

An officer repeats “Camera is off,” and each video ends.

The disabling of body cameras is against the LVMPD’s own regulations which is news enough. However, this was done on the night of the deadliest mass shooting in recent history and it was completely ignored. How can that be?

The more information that comes out on the horrific events of that fateful night, the more questions the public has. The uncooperative behavior by the Las Vegas Metropolitan police department is a kick in the teeth to the victims and their families. The public must remain vigilant in asking these questions and not allow such utter disrespect for transparency. Please share this article with your friends and family so that they too may begin demanding answers to these and so many other unanswered questions.