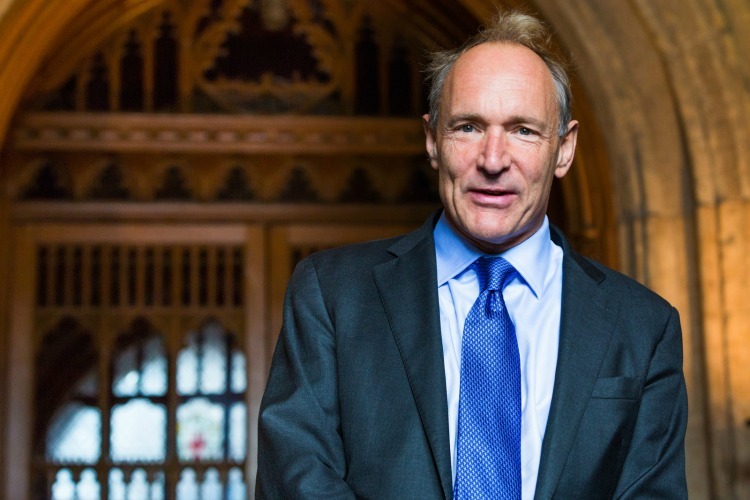 It’s not news to anyone who has read this website and others in the same niche for very long that the internet is a place of bias, manipulation, and prejudice. Website owners and outspoken people who go against the status quo are swiftly “punished” by the powers that be, effectively making it so that only one opinion can be heard.

But one man has a plan to take back the web.

And it isn’t just some yahoo with a go-fund-me account. This guy has street cred like no one else.

In 1989, Tim Berners-Lee invented the World Wide Web, an Internet-based hypermedia initiative for global information sharing while at CERN, the European Particle Physics Laboratory. He wrote the first web client and server in 1990. His specifications of URIs, HTTP and HTML were refined as web technology spread.

He is Director of the World Wide Web Consortium (W3C), a Web standards organization founded in 1994 that develops interoperable technologies (specifications, guidelines, software, and tools) to lead the Web to its full potential. He is a founding Director of the Web Science Trust (WST) launched in 2009 to promote research and education in Web Science, the multidisciplinary study of humanity connected by technology. Berners-Lee is also a Director of the World Wide Web Foundation, launched in 2009 to coordinate efforts to further the potential of the Web to benefit humanity. (source)

The internet we have is not the internet he intended when he created it.

Back when he release the source code for free, his goal was to make the Web an open, democratic platform that anyone could use and speak freely.

Berners-Lee, who never directly profited off his invention, has also spent most of his life trying to guard it. While Silicon Valley started ride-share apps and social-media networks without profoundly considering the consequences, Berners-Lee has spent the past three decades thinking about little else. From the beginning, in fact, Berners-Lee understood how the epic power of the Web would radically transform governments, businesses, societies. He also envisioned that his invention could, in the wrong hands, become a destroyer of worlds, as Robert Oppenheimer once infamously observed of his own creation…

…For the man who set all this in motion, the mushroom cloud was unfolding before his very eyes. “I was devastated,” Berners-Lee told me that morning in Washington, blocks from the White House. For a brief moment, as he recalled his reaction to the Web’s recent abuses, Berners-Lee quieted; he was virtually sorrowful. “Actually, physically—my mind and body were in a different state.” Then he went on to recount, at a staccato pace, and in elliptical passages, the pain in watching his creation so distorted. (source)

As anyone who has been paying attention, avid users of Berners-Lee’s creation have bastardized it. They’ve profited from it, squelched free speech on it, stolen our private information on it, destroyed lives using it, and even carried out horrible psychological experiments on unwitting users.

But Berners-Lee isn’t going to take it lying down.

Berners-Lee is going to take back the internet.

If anyone else said, “I’m going to create a new, free internet!” people would just roll their eyes. But when Tim Berners-Lee says it, Google and Facebook had better pay attention. If anyone can do it, he can.

He recently wrote a piece on Medium to let people know that he is hard at work creating an alternative.

I’ve always believed the web is for everyone. That’s why I and others fight fiercely to protect it. The changes we’ve managed to bring have created a better and more connected world. But for all the good we’ve achieved, the web has evolved into an engine of inequity and division; swayed by powerful forces who use it for their own agendas.

Today, I believe we’ve reached a critical tipping point, and that powerful change for the better is possible — and necessary.

This is why I have, over recent years, been working with a few people at MIT and elsewhere to develop Solid, an open-source project to restore the power and agency of individuals on the web.

Solid changes the current model where users have to hand over personal data to digital giants in exchange for perceived value. As we’ve all discovered, this hasn’t been in our best interests. Solid is how we evolve the web in order to restore balance — by giving every one of us complete control over data, personal or not, in a revolutionary way. (source)

You can go here to check out Berners-Lee’s new invention.

How he is building a new internet

Right now, Inrupt and Solid are in their infancy. But on an internet determined to siphon our data and sell it to the highest bidder under the guise of “convenience,” these are ideas which are past due. Berners-Lee’s new invention could stop the creep of spying and manipulation (that seem to me to be leading us toward a social credit system like the one in China).

Meanwhile though, there is a wave of concern, and related energy, desperate for change. People want to have a web they can trust. People want apps that help them do what they want and need to do — without spying on them. Apps that don’t have an ulterior motive of distracting them with propositions to buy this or that.  (source)

He has taken a sabbatical from MIT and reduced his responsibilities in other groups he founded to make this happen. He founded a platform called Inrupt.

It’s time to reset the balance of power on the web and reignite its true potential.

When Sir Tim Berners-Lee invented the web, it was intended for everyone. The excitement and creativity of its early days were driven from the notion that we can all participate – and the impact was world-changing.

But the web has shifted from its original promise – and it’s time to make a change.

We can still unlock the true promise of the web by decentralizing the power that’s currently centralized in the hands of a few. (source)

It’s not a stretch of the imagination to think that Berners-Lee will have some mighty adversaries in making this happen. There are huge companies with a lot to lose. And by a lot, I mean billions of dollars.

“his plans could impact billion-dollar business models that profit off of control over data. It’s not likely that the big powers of the web will give up control without a fight.”

When this major potential disruptor was noted, Berners-Lee shot back: “We are not talking to Facebook and Google about whether or not to introduce a complete change where all their business models are completely upended overnight. We are not asking their permission.”

Let’s hope that Berners-Lee is well protected. I have a feeling he’s going to need it.

Inrupt could literally save the world.

The internet as we know it is taking us no place good. But maybe a visionary like Tim Berners-Lee could change all that. The technology that allows us to look up information anywhere we are from a device we hold in the palms of our hands is not going away.

But maybe, it can be fixed.

Inrupt will be the infrastructure allowing Solid to flourish. Its mission is to provide commercial energy and an ecosystem to help protect the integrity and quality of the new web built on Solid.

There are many examples of open-source efforts that have benefited hugely from the contribution of a well-resourced company. While the open-source community provides initiative and a deep source of innovation, everyday web users, as well as businesses, often look for applications and services from a commercial entity that also provides technical support and vital, ancillary business services.

I believe this same model will be critical to the success of Solid. Inrupt’s success is totally aligned to Solid’s success. My partner and inrupt co-founder is John Bruce, an experienced business leader with the skills to execute on my vision for Solid. We share the same passion for creating a better and more balanced web.

Together, Solid and inrupt will provide new experiences benefitting every web user — and that are impossible on the web today. Where individuals, developers and businesses create and find innovative, life- and business-enriching, applications and services. Where we all find trusted services for storing, securing and managing personal data.

I’m incredibly optimistic for this next era of the web.

Could Tim Berners-Lee save the world with Inrupt and Solid?

Everyone’s been looking for a hero to change the internet. It just might be him.