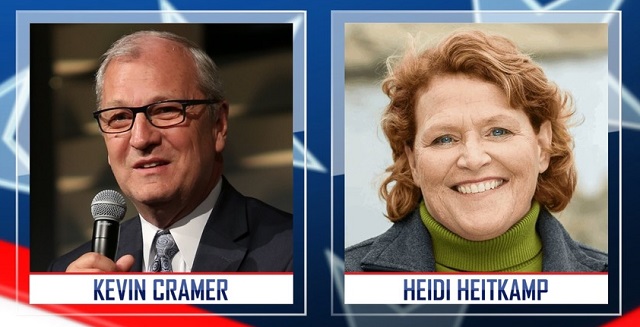 Republican challenger Rep Kevin Cramer is leading red-state Democrat Senator Heidi Heitkamp in North Dakota by 10 points and the top issue among voters is supporting Judge Kavanaugh’s nomination to the Supreme Court, according to a new poll.

Heitkamp has so far refused to say whether she will vote in favor of Judge Kavanaugh.

If Rs win in North Dakota, Dems would need to win in TENNESSEE or TEXAS to have any chance of retaking the Senate.https://t.co/v4UwZ7mKCK

“Sixty percent of voters in North Dakota support Kavanaugh with 27 percent expressing opposition,” KFYR-TV reports. “The poll was conducted during the recent disclosure that Kavanaugh may have engaged in sexual misconduct while in high school and college, but before the Sept. 27 testimony by Kavanaugh and one of his accusers before the Senate Judiciary Committtee.”

Another poll out of Missouri found red-state Democrat Claire McCaskill is now losing by 2 points to Republican challenger Josh Hawley, with 49% of voters saying they’re less likely to support her because she came out against Judge Kavanaugh.

49% say they are less likely to vote for her because she is opposing Kavanaugh. https://t.co/xl4F3mznI0