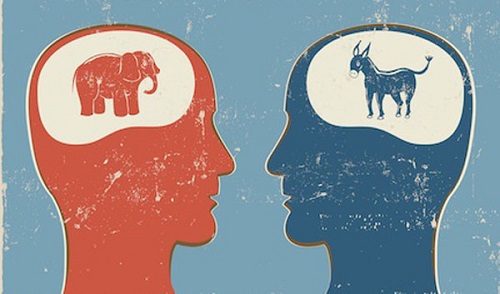 According to a new study, the political divide in America is worse than it has ever been.

While this finding is likely not a surprise to anyone who has been paying attention, the research does reveal some disturbing trends.

Conducted by Zachary Neal, an associate professor of psychology and global urban studies at Michigan State University, the study is among the first to measure polarization not only by examining the frequency of parties working together, but also by demonstrating how they’ve grown more distant than any other time in modern history.

Those who are affiliated with the Democratic party or the Republican party may be inclined to blame “the other side”, but not so fast: Neal found that neither side is to blame for the growing rift. Regardless of the party that holds the majority in Congress or controls the White House, the political divide has widened.

In a press release, Neal explains,

What I’ve found is that polarization has been steadily getting worse since the early 1970s. Today, we’ve hit the ceiling on polarization. At these levels, it will be difficult to make any progress on social or economic policies.

Strong polarization actually dropped in the early and mid-1970s, Neal found, but then took a steady turn for the worse by 1980. Fewer lawmakers are coming together to co-sponsor attempts at bipartisan bills, and instead, more are spending their time fighting with and criticizing the “other side”.

To conduct the study, Neal analyzed publicly available data on who sponsored bills in Congress from 1973 to 2016. He specifically looked at how often politicians from both sides of the aisle co-sponsor legislation.

Although thousands of bills are introduced each year, the average representative or senator co-sponsors only about 200. And when they decide with whom to co-sponsor bills, they view nearly half of their colleagues as “the opposition.”

“We’re seeing lots of animosity in politics,” Neal said. “Although bills do occasionally get passed, they don’t stick around long enough, or never get fully implemented, and therefore don’t have a lasting impact. This kind of partisanship means that our democracy has reached a kind of stalemate.”

Neal cited the Affordable Care Act as an example. “The Democrats held a slim majority — just enough to get the bill passed. Then the Republicans took control, again with a slim majority, and tried to repeal it,” the press release explains.

“The threat that strong polarization poses to lawmaking may not be the implementation of extreme policy, but rather may be dramatic swings from one partisan extreme to another that prevent the long-term implementation of any policy,” Neal wrote.

“This study raises new questions about the future of Congressional politics,” Neal said. “In truth, the only thing that is bi-partisan in Congress is the trend toward greater polarization.”

There are three things that Democrats and Republicans seem to agree on (much to the detriment of Americans) that Neal did not mention: Spending taxpayer money, stomping on individual rights, and expanding the military-industrial complex.

While many Americans were distracted by the Kavanaugh/Ford circus, our “representatives” were busy doing other things, as Reason reported:

Congress passed a massive spending bill and another round of tax cuts that will combine to blow an even bigger hole in the federal budget. Lawmakers also found time to pass a bill restricting Americans’ access to prescription painkillers, something that’s likely to force people who are dependent on or addicted to opioids (a distinction seemingly lost on legislators) to seek out more dangerous alternatives.

But if you needed further evidence that Congress doesn’t give a damn about planning for the country’s future, look no further than the passage this week, in both houses, of a $853 billion spending bill. About $600 million of the spending is directed towards the Pentagon—boosting the military budget to levels not seen since the height of the Iraq War.

This gigantic, wasteful, pathetic spending bill passed the House and Senate. @POTUS @realDonaldTrump said, “I will never sign another bill like this again,” about the last bill like this, the omnibus. He’ll now be put to the test. https://t.co/x3FpgmRemD

Debt increased last year by over Trillion $ again. 8 of the last 11 years have seen Trillion $ deficits.https://t.co/e6bJezfcT6
Republicans and Democrats must get over their spending addictions. Voting for the omnibus does not make you the adult in the room. Grow-up or bankrupt.

What can Americans do about this division?

Electing more centrists to Congress may be an option, Neal said. However, that will be difficult, because centrists often don’t appeal to American voters, who are also increasingly polarized.

While it’s hard to imagine incivility among Democrats and Republicans getting worse, it likely will, Neal said, especially if one party barely holds the majority.

Perhaps it is time to start thinking about supporting third-party candidates, or abandoning the current political system entirely.

Meanwhile, threats of civil war escalate, with no end to the division among citizens in sight.