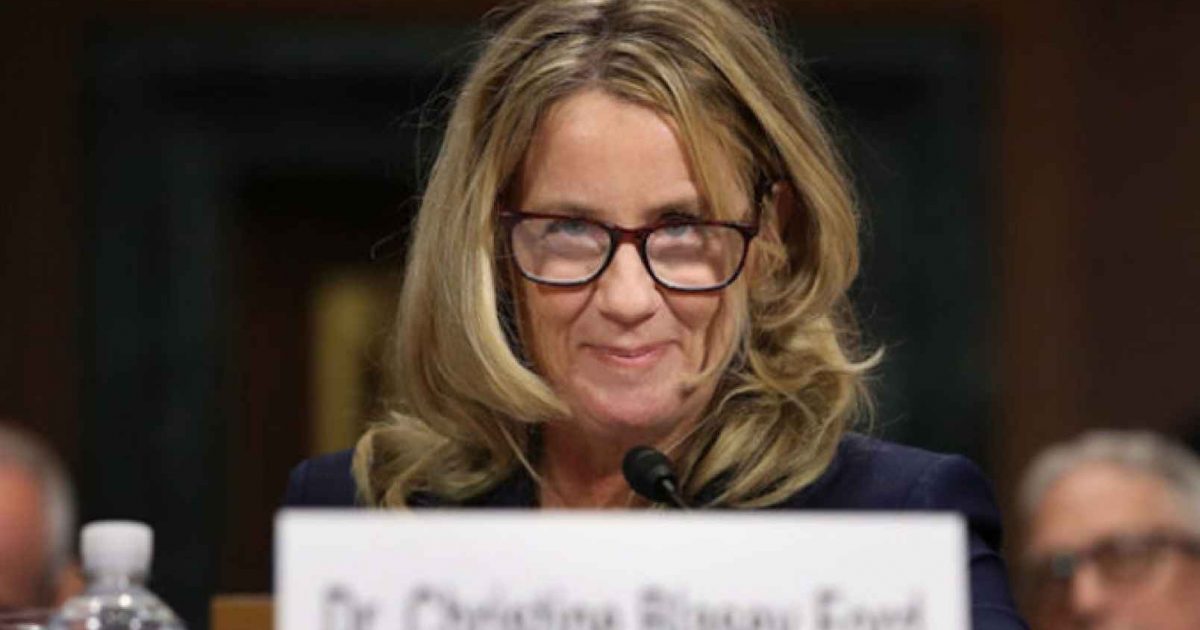 One thing I learned watching the witch trial of Brett Kavanaugh on MSNBC, is that a prestigious university in New York has a Vice President for Social Justice. (She is an MSNBC commentator). Her Orwellian title is but one of many signs that our country is already on the threshold of 1984; the Judiciary Committee circus is another.

In her comments on the hearings, the Vice President for Social Justice, Maya Wiley, was clearly out for blood, and had no interest in evidence, due process, or the facts. She is also of course both a woman, a woman “of color” and a lesbian. In other words, she occupies three of the top rungs in the hierarchy of the oppressed – all bombs waiting to blow up in the face of any straight white male who stumbles into their cross-hairs.

Any fair-minded observer of the Kavanaugh proceedings would have noted that no one – Republican or Democrat – so much as laid a glove on his female accuser, Christine Blasey Ford, even though she had come forward to destroy the life of an exemplary individual and his family. No one, dared to do so. Call this feminine or victim privilege. Kavanaugh’s high school yearbooks with tales of drinking were fair game, but Ford’s – which openly talk of the girls’ sexual promiscuity and boast of girls passing out at drinking parties – were not. Nor were her extensive political connections to the anti-Trump left, the pro-abortion movement, the Democratic Party and even the law firm involved in the Steele dossier.

Yes, the sexual crime prosecutor established that Ford lied to the committee when she said she couldn’t come to Washington for the hearings because she was afraid of flying. In fact, as she admitted under questioning, she has frequently flown all over the world for pleasure. But no one actually confronted her about this. For example, no one asked her directly, “If you were brazen enough to lie to a congressional committee about this, why should we believe you in regard to anything else?”

Yes the same prosecutor gently asked Ford why she thought her best friend Leland Keyser, whom she claimed was present at the party and would corroborate her story, in fact refuted it, saying that she was never at such a party, and the one in question never happened. Ford gave a transparently evasive answer saying her friend had (unspecified) health issues, while never explaining what they were or why that should cause her to contradict what Ford had claimed.

Actually, all the alleged witnesses to the party where the incident was supposed to have taken place have denied that they were there. The one witness who was allegedly in the room where she claimed the incident took place says he wasn’t there. But none of the senators had the temerity to confront her directly with the obvious question: why should we believe your inflammatory claims about Judge Kavanaugh given that no one you have named supports any piece of your story? Moreover, no one asked her “How do you feel about besmirching the reputation of a stellar individual, and bringing incalculable pain to his family by advancing claims that no one corroborates? How can you say that you are 100% sure an incident happened, when you can’t remember anything else accurately about the evening? Did your lawyers instruct you to say 100%? What actually did your lawyers prompt you to say in your prepared statement?

No one said to her: you signed a letter attacking President Trump’s border policies and were able to get the anti-Trump ACLU to publish it; you contacted an anti-Trump paper, the Washington Post, to make your charges; you turned first to Democrats who are sworn to “resist” – actually sabotage –the Trump presidency and his judicial nominees; and you accepted attorneys recommended by Democrats, who are activist Democrat, anti-Trump lawyers. Can we conclude, therefore, that there might be a political motive behind your decision to bring up these character-ruining accusations about a rough-housing you allegedly received 37 years ago when you and Kavanaugh were too young to even vote?

No one dared to ask these questions or to vigorously pursue problematic areas of her testimony and behavior. Instead, everyone expressed sympathy for her and her pain in testifying, and said how credible she sounded – even though, unlike Kavanaugh’s presentation, hers was vetted and coached by lawyers, and even though it amounted to character assassination if her memory was false.

At the bottom of these asymmetries lies the fact that despite half a century of women’s “liberation” and “hear me roar” proclamations the feminist attitude towards women is still Victorian. Women are fragile violets who wilt before the raised voices and impassioned claims of male innocence. But this image is a one-way mirror. Let a moment go by and then, when they or their defenders are on the counter-attack, hear them roar. Senator Mazie Hirono put it mind-numbingly well: “Men should just shut up and stand up (for their female accusers of course).”

This is the ideologically constructed atmosphere, which makes a latter-day witch trial like the Judiciary hearings possible. Christine Blasey Ford’s story is unbelievable on its face. She claims that after the alleged incident at the alleged party, where three of her friends (who have denied it) were allegedly present, she fled. Here are some questions that were not asked:

How did she get past those friends without them seeing her and her distress?

How could she not have warned her best friend, Leland Keyser, that there were two potential rapists in the house, if that’s what she thought?

How did she get home?

How did her best friend not ask her the next day why she left without her, or what happened?

Why was this such a trauma she could not tell her best friend? One can understand why she would want to conceal from her parents that she had gone to a drinking party with boys, but her friend who was allegedly there? She doesn’t even claim that she was raped, only that she was frightened in an incident that could have happened at any of the drunken parties she might have attended as described in her high school yearbook.

On the face of it, Christine Blasey Ford’s story is not only unsubstantiated. It isn’t credible. The destruction of Brett Kavanaugh’s reputation is the equivalent of a modern-day lynching – the third that Democrats have orchestrated in the last twenty-seven years. It’s despicable. At least Republicans like Lindsey Graham have laid that charge at the door of the Democratic culprits who worked so hard to accomplish it. But, as a nation, we have obviously not reached the point where we can grant women true equality by confronting their lies and their reckless accusations with the same candor and frankness we would if they were coming out of the mouths of men.