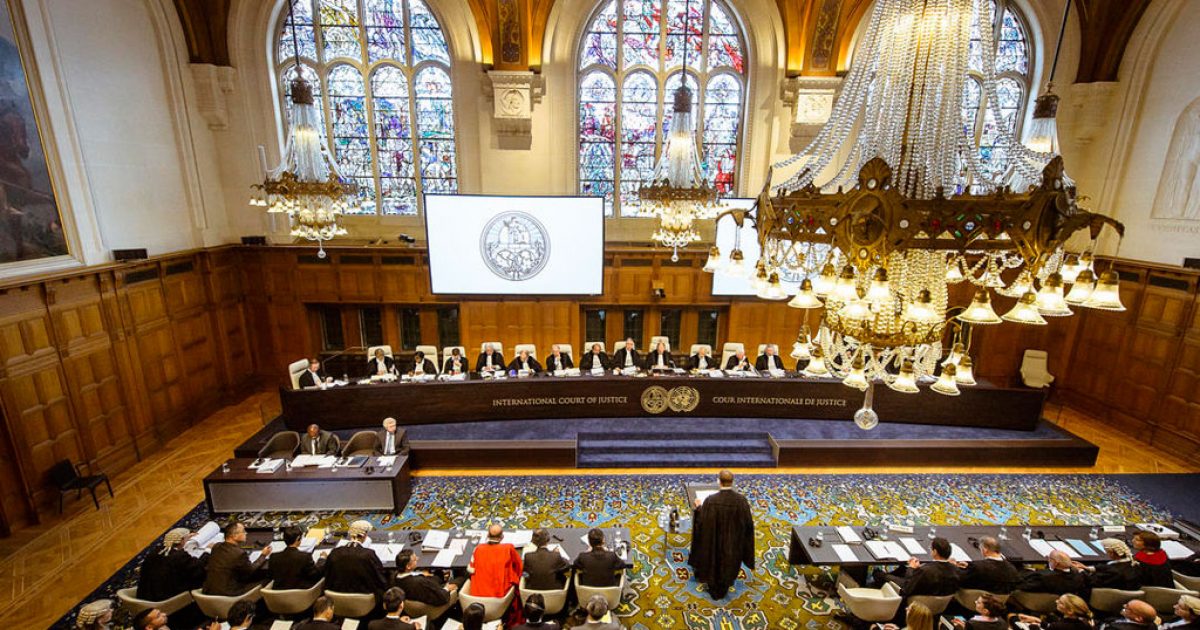 Let the hysterical laughter roll!  Wednesday, the United Nations’ top court, the International Court of Justice (ICJ), ordered the united States “to suspend sanctions on ‘humanitarian’ goods for Iran ….”  The UN and its members’ bloviated sense of importance and power never cease to provide moments of humor.

The International Court of Justice (ICJ) handed down the bombshell judgement after Iran asked it to halt economic measures that Trump reimposed after pulling out of a landmark nuclear deal with Tehran.

Judges in The Hague unanimously ruled that the sanctions on some goods breached a 1955 “friendship treaty” between Iran and the US that predates Iran’s Islamic Revolution.

“The court finds unanimously that… the United States of America… shall remove by means of its choosing any impediments arising from the measures announced on 8 May to the free exportation to Iran of medicines and medical devices, food and agricultural commodities” as well as airplane parts, chief judge Abdulqawi Ahmed Yusuf said.

The court said sanctions on goods “required for humanitarian needs… may have a serious detrimental impact on the health and lives of individuals on the territory of Iran.”

US sanctions also had the “potential to endanger civil aviation safety in Iran and the lives of its users.”

First of all, despite the court’s “responsibility” to rule on disputes between UN member states and the “regulation” the decisions are binding, the ICJ has zero enforcement capability.  And, this court has no standing in the united States because of our Constitution.  To submit to such a ruling would mean the united States, and/or any other nation that would submit to this court’s rulings, is no longer a sovereign nation, but an entity under the “rule” of the UN.

Second, the court cites a “friendship treaty” from 1955 as the basis for this ruling.  This treaty, made before the Iran Islamic Revolution, was with the prior government of Iran.  Once that government was “overthrown” by Islamic militants/terrorists, who stormed the US embassy and held our citizens hostage for over a year, the 1955 treaty should be null and void since the government of Iran changed and no new treaty was made with the despotic, tyrannical, Islamic based government.  Moreover, the US and Iran have had no diplomatic relations since 1980.

But, with the majority of nations comprising the UN being Islamic ruled and the judge originating from the lawless nation of Somalia, there would be no reason to expect the judge would rule any other way since Somalia is prominently, 99%, Sunni Islam.

Third, Iran is a major sponsor of terrorism around the world.  In fact, terrorism is probably the nation’s main export.  Iran and its Muslim population frequently chant “death to America” and burn American flags.  Yet, the nation’s leadership “demand” humanitarian aid from a nation whose principles, values and people it hates.  According to the Constitution, the definition of treason is giving aid and comfort to our enemies, which Islam is our enemy – so is Iran because of its Islamic steeped government, threats against our republic, and continual voicing of wanting our death.

The Iranian Foreign Minister, Mohammad Javad Zarif, claimed the US sanctions were a form of “psychological warfare” with the intent of bringing about a regime change.

Really, you can’t make this stuff up.

But, Washington, DC did not take this lying down and fired back.  The US seat of government informed the court it had no jurisdiction in our republic to rule on the case since “it concerns a matter of national security.”

Naturally, all of this comes after President Trump rejected the failed nuclear deal negotiated by Muslim sympathizer Hussein Soetoro and his Keystone Kops and rejected overreaching international organizations.  Trump claimed the aid given allowed that nation to support terrorism and construct nuclear missiles.  With the nature of the Iranian government being what it is, Trump’s claim is not without merit.  Because of the ideology of Islam allowing taqiyya and Iran having a government steeped in Islam, it isn’t a far stretch of the imagination to theorize the money given the Iranian government is not used for “humanitarian” efforts.  Iranian officials claim the sanctions imposed by the US potentially endangers “civil aviation safety in Iran and the lives of its users.”

Here’s a thought for Iranian officials.  Instead of spending money on terrorism and exporting terrorism, spend your own money on “humanitarian” efforts and civil aviation safety for your own people.  Don’t rely on other governments and people your nationdespises to do what you should be doing for your nation and its people.  This is simple and logical;  but, when dealing with Islam and its followers, nothing is logical and everything is convoluted.  Demanding money from one’s declared enemies is like the schoolyard bully demanding everyone else’s lunch money – the money isn’t needed but is a way of controlling others through threats and intimidation.

Unfortunately, the European Union is determined to keep the deal alive, planning mechanisms that would allow skirting of the US sanctions, even though France accused the Iranian Intelligence Ministry of planning a bombing of opposition groups near Paris.  This is not unlike the European Union – placate Islam and countries whose governments are steeped in it regardless of their support and export of terrorism.

The United Nations has long been a joke.  It should be dismantled and removed from US soil.  While an Islamic judge sitting on the UN ICJ “rules” for “humanitarian” aid to Iran against the US, Iran is a complete inhumane country where Shari’a law dominates and rights belong only to Muslim men.  This organization of 193 countries dares to cry out against perceived violations of human rights in Israel and the united States while turning a blind eye to the gross human rights violations occurring in Islamic nations and elsewhere.  While this organization receives the bulk of its funding from the US and its main headquarters sits on US soil, it rejects freedom and liberty, God-given individual unalienable rights possessed by all people and any democratic or republic form of government.  It moves to become the tyrannical, despotic governing body of the world, all the while advocating on behalf of Islamic Shari’a law observing nations.

Not surprisingly, the United Nations wants nothing more than to criminalize religious heresy, but only where the claims are made by practicing Islamists, as an editorial in The Washington Times indicated in 2010.   This has been ongoing since the September 11, 2001, terrorist attack against the united States, pushed by Islamic nations of the Organization of the Islamic Conference/Cooperation.

And, the UN allows this sort of garbage resolutions to come forward out of fear of terrorist attacks by Muslims in non-Muslim majority countries.  Why else do the nations of the UN remain silent on the atrocities committed against those of minority religions in Muslim majority nations?  There is open discrimination in the UN against Israel, probably because of anti-Semitism in general, but more specifically to placate Islamic nations.

The US should remove itself from the UN, as well as should all Western nations, and cease providing any funding to that global governance wannabe organization that benefits no nation whatsoever.  What good has it done?  Human rights violations continue to occur worldwide.  Human trafficking is the same.  There has been nothing but conflict and war throughout the world since the organization, intending to establish a platform for peaceful resolution among members states, was founded.  It holds no authority whatsoever over sovereign nations, rendering it’s “rules, regulations, laws and courts” nothing more than theater and the tail end of a good joke.  One only has to look at the history of the creation of the United Nations to know there is mischief afoot.  Add the abuse and corruption in the organization where US funding is considered an “entitlement” instead of a privilege and there is more than enough justifiable reasons for the US to cease its membership, cease its funding, evict it from our soil, and urge its dismantling.