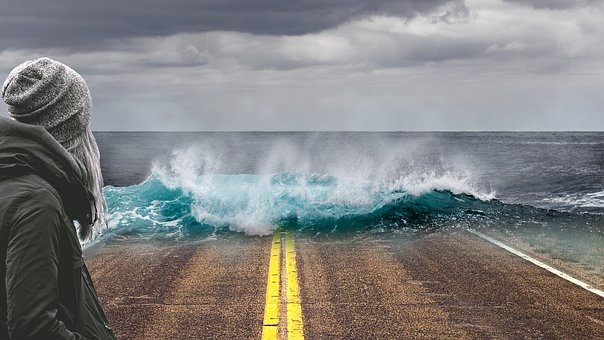 Could you imagine the immense devastation that would take place if a giant wall of water 80 feet high slammed into the west coast of the United States?  It may not happen today or tomorrow, but scientists assure us that it will definitely happen one day, and at this point we are completely and utterly unprepared for such a disaster.  The “Ring of Fire” is becoming increasingly active in 2018, and the death toll from the earthquake and tsunami that just struck Indonesia is now above 1,300.  And we all remember the 2004 Indian Ocean tsunami that killed more than 200,000 people.  Now we are being told that something like that could happen on our side of the Pacific Ocean, and the mainstream media is even warning us that a giant tsunami could slam into the west coast “without warning”.  Should we take such a statement seriously?

Well, according to environmental engineering professor Costas Synolakis, such a scenario is actually quite likely and would be “hard to prepare against”.  The following comes from the Los Angeles Times…

In Southern California, an earthquake could trigger an underwater avalanche in the Santa Monica Bay, producing a tsunami that could inundate low-lying areas of Santa Monica and the South Bay towns of Manhattan Beach, Hermosa Beach and Redondo Beach, said Costas Synolakis, a USC civil and environmental engineering professor and tsunami expert.

“This is exactly the scenario we are afraid of in Southern California,” Synolakis said, “where we are going to get an on-land earthquake … and the biggest shaking triggers a submarine landslide. … This is kind of a nightmare … that’s hard to prepare against.”

Could you imagine what such a disaster would mean for our nation?

And the experts tell us that the odds of a major tsunami are actually greater farther north.  The Cascadia Subduction Zone is capable of producing magnitude 9 earthquakes, and such an earthquake could send a wall of water up to 80 feet high slamming into the west coast.  The following comes from King 5 News…

Like Indonesia, Washington is expecting to be hit with a far larger earthquake, a magnitude 9 off our coast. That earthquake could come from the Cascadia Subduction Zone, which runs from northern California to southern British Columbia.

Instead of a devastating 20-foot high wave, a tsunami along Washington’s coast is forecast to reach four times that height in places.

In such a scenario, thousands upon thousands of people would die and the economic damage would be astronomical.

It has been estimated that it would take up to three years to restore drinking water and sewer service to coastal areas, and the wreckage “would be enough to fill 1m refuse trucks”.

But this isn’t even the worst case scenario.

In one of my previous articles, I included a quote about a major scientific study that concluded that large parts of California could plunge into the sea “almost instantly” in the event of a catastrophic earthquake…

Yes, this really could happen.

In other words, you would have little to no warning.

With only minutes between the shaking and the tsunami, it’s possible no official early warning may come. It was only about 10 minutes between the earthquake and the first wave that washed across Palu, said Caltech seismology professor Pablo Ampuero. When a quake hits further out in the ocean, officials can have hours to evacuate before the waves hit land. But on Friday, they had only minutes.

The mainstream media didn’t give it too much coverage, but what we just witnessed in Indonesia was extremely unusual.  You can view footage of the ground actually behaving like water right here.

Could you imagine the ground going up and down like that where you live?

And if all of this wasn’t enough for people living in California to be concerned about, now scientists are telling us that there is a supervolcano in the state that is “a potentially greater threat than Yellowstone volcano”…

The 20-mile long Long Valley Caldera in eastern California is one of the world’s largest volcanic calderas.

The supervolcano measures approximately 10 miles in width and is up to 3,000 ft deep.

But very few people know about this supervolcano east of the central Sierra Nevada Range, making it a potentially greater threat than Yellowstone volcano.

And a study published this August in the science journal GeoScienceWorld, has found evidence of ground deformation at the supervolcano.

Geologists who led the study found “ongoing uplift suggests new magma may have intruded into the reservoir” since at least 1978.

If you are familiar with my books, then you already know that I have been warning of these coming changes to our world for a long time.

We live at a time when our planet is becoming increasing unstable.  Major seismic activity is happening almost on a daily basis now.  In fact, during one recent 30 day period the number of global earthquakes was more than 50 percent above normal.

Despite all of our advanced technology, we are still very much at the mercy of natural forces that are well beyond our control.

Someday the “Big One” will hit the west coast, and without a doubt it will be a horror beyond what any of us can imagine right now.