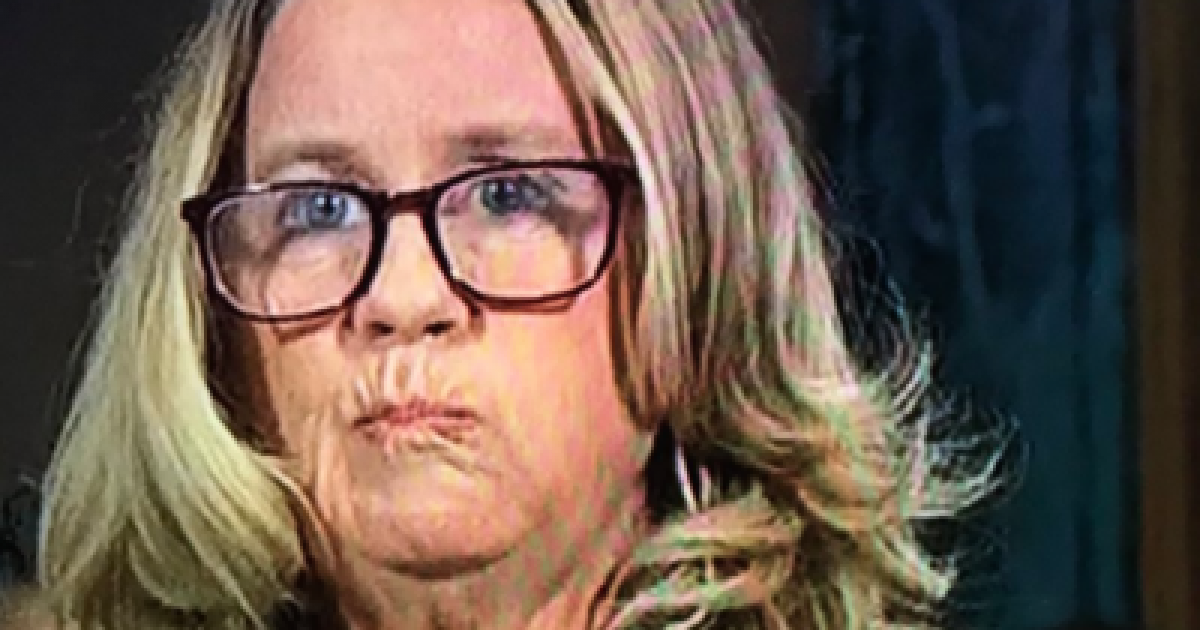 Little attention has been paid to Ford’s high school yearbook (save for those who worked hard to scrub it from the web).

[SCRIBE 84, pgs. 144-145, looking back on Blasey’s sophomore & junior years ]
1982 was a particularly wild year, and Scribe 82 published multiple pictures of minors drinking heavily, beer cans stacked up, liquor repeatedly glorified, “boys, beer and ‘the “Zoo” atmosphere.’” The caption on the right side of the image mocks the faculty and parents, “Come on, you’re really too young to drink.”

Hard-core drinking and whoring. If Kavanaugh’s yearbook is fair game, so is Ford’s. Just sayin’.

The story seems to keep unraveling. The supposed victim of Judge Brett Kavanaugh is now having the tables turned on her. A college friend and conservative contributor for many publications like the Daily Wire, PJ Media and The Federalist have come forward to claim she was never traumatized at all by any kind of sexual assault.

Christine Ford’s allegations are getting weaker by the day. We reported on Christine Ford’s yearbook pictures disappearing off the internet. Probably a good thing they have, but they all got snagged by some sleuthy trollers.

DC McAllister, the writer of Catwoman is tweeting away accusations that Christine was quite the party animal in college and not an emotionally wounded victim by any standards. Ms. McAllister claims Dr. Ford would often “hook up” with the guys on Henderson Street and be “drinking at He’s Not Here”, a bar in Chapel Hill, NC.

Christine Blasey Ford was a classmate of mine at UNC. We graduated in 1988. I want to ask Christine if she remembers partying at Trolls, drinking at He’s Not Here. Hooking up with guys at Henderson Street. Eating at Time Out. Remember those days, Christine? Tell us about them.

It is apparent she is not shy about calling out Dr. Ford. She names places and events very vividly. She even mocks her in various tweets reminding her that she is not a victim.

Republicans need to stop saying Ford was credible but Kavanaugh is innocent. She cannot be credible with zero evidence. A quivering voice doesn’t equal credibility. Allegation is not proof. Stop being manipulated by a woman’s emotions. You’d think men had learned this by now.

Why do I ask Christine if she partied and slept around? Not to say she deserved to be assaulted because of her own behavior. No, I ask because when you have no evidence, character matters regarding truth. We’re examining Kavanaugh’s character. We need to examine her’s. Period.

I’ve been saying this same thing. Even her emotions didn’t ring true. I don’t know why people don’t see it. But we do live in an age when people are unable to determine the difference between fantasy and reality. We’re entertaining ourselves into stupidity. https://t.co/zw9bJGOPTB

I understand but to me, however the only sincere emotion I picked up on was nervousness about being there and fear over the backlash of her accusations which she never meant to go public with her name revealed. One thing I’m good at is intuition. I trust it. I read people well. https://t.co/OulZKNQdYD

This is excellent: I love how the expert talks about Ford’s “pretty pose” and manipulation of being cute. Body Language – Brett Kavanaugh Hearing Accuser Dr Christine Blasey Ford https://t.co/hr18gvGbxR #BitChute

She talks about flight and fight, cortisol and neurotransmitters about her response to the assault. This is not how a woman who has been attacked talks. They talk about anger, helplessness, fear, pain. They talk about their feelings. This is so bizarre, I can’t even… pic.twitter.com/hI1N0h1f8T

“I didn’t understand why I would need a lawyer.” You’re claiming a crime was committed, lady. Instead you contacted a congressman. Wut??! pic.twitter.com/zb8wuhY7lh

Chris Wallace says Ford’s testimony is credible because she’s emotional. What a fool he is. pic.twitter.com/nyHOBd2naG

Ford’s memory crumbles when asked about what she told the Washington Post. Hm. pic.twitter.com/OYWc6xwvxh

In other words Ford’s fear of flying is selective. pic.twitter.com/NM3xgrloPO

Maybe it is time to have these witnesses testify or at least be interviewed by law enforcement.

I will now wonder if all those people who gave money for Christine Ford’s expenses on a Go Fund Me page,  will now want their money back.