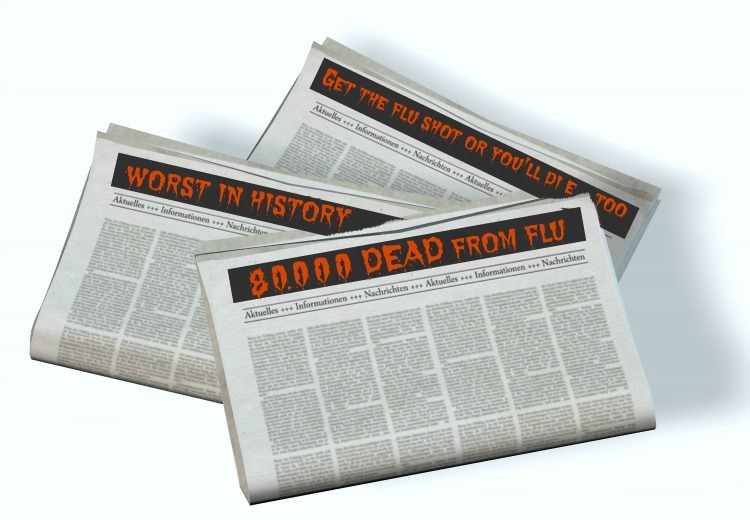 The New York Times is reporting that 80,000 Americans died of the flu last winter and that it’s the highest death toll yet. Scary articles like these are thinly veiled attempts to push Americans into the vaccine regime (get your flu shots or you’re going to die!) out of fear, panic, and hysteria. Maybe it is the highest death toll yet, however, there is more than meets the eye.

The Big Pharma-media-government conglomerate has a lot staked in keeping you unwell, scared and dependent. Frightened, self-doubting, and unhealthy people are much easier to control.

But first, it’s not just about money…

A lot of people point to the billions that Big Pharma rakes in annually as a reason for why they push their drugs and don’t care about injuries and death that could result from them: vaccines, opioids, antidepressants, etc.

Sure, but money is just a tool for a bigger goal.

This desire for omnipotence is what drives the vaccine marketing campaigns. Why else would there be cohesive actions among giant multinational corporations, the government, and the media? Did you know that most University medical research is brought to you by pharmaceutical companies? Think of how much power an entity wields over the masses if it can control the flow of information and its perception.

What other companies enjoy tax-funded compensation courts just for the injuries caused by their product instead of allowing injury victims to sue the manufacturers themselves?

If you are injured or die from vaccination, you cannot sue the vaccine makers or the medical practice you rely on. Once it’s done, all responsibility thereafter is dumped on the person who allowed themselves to get the vaccine. This is one of the few examples where consumers have few rights and the sellers have too much leverage over the individual. Many employees don’t even have basic rights over the bodies while they are at work anymore…

The media steamrolls the public with questionable death toll numbers of people who succumbed to the flu. Sadly, they downplay the numbers of vaccine injuries such as the 4250% increase in fetal deaths that occurred after flu vaccines were deemed “safe” for pregnant women…

Think those viral Facebook posts are organic? Is that a real Facebook comment or a paid troll? Check out this short talk by journalist Sharyl Attkisson about Big Pharma’s astroturfing to trick consumers.

Attempting to make everyone feel responsible for everyone else’s health (“herd immunity”)when in actuality, the myth of vaccine effectiveness has created a lack of self-responsibility in society. And herd immunity is a misfire because it was based on a different premise than what’s presented, not vaccination. Although Big Pharma makes people feel they’ve “done their part” for society when they vaccinate, they’ve actually outsourced their own and everyone else’s health without fully comprehending the dire consequences to health.

Calling Flu a Season Like It’s a Foregone Conclusion – Last time I checked, we only have four seasons. Flu and flu-like illnesses can happen at any time. The flu is not a season…

Get Your Flu Shot – My flu shot? No, that’s your flu shot, Big Pharma. It doesn’t belong to me and I’m not buying it.

Vaccine-pushing trolls use horror stories and graphic imagery to sway “undeciders” to go ahead and vaccinate.

It’s been admitted before that medical workers are prompted to emotionally push parents into vaccinating their children in order to “train” them into coming back for “wellness” visits and that the vaccines in the first year of life are meaningless to the underdeveloped immune system.

Earlier this year, the CDC chief said, “85% of children who died from the flu this season were unvaccinated.” But that doesn’t mean never vaccinated, it could mean they didn’t receive “this year’s vaccine.”

Then there are the “authority figures.”

People vaccinate to get a job because it’s “the rule.” Or they vaccinate their children because they tell themselves they “have to.” They don’t connect the dots between the earaches, seizures, constant sicknesses, food allergies, and learning disabilities that weld them to their pediatrician’s office for the next 18 years.

The truth is – most humans are afraid of authority and confrontation and it’s easier to acquiesce when someone who acts like an authority comes down on you with forceful tactics. But the more you say “No” the easier it gets. Office managers, school officials, pediatricians – none of them should be able to controlwhat you do with your body.

For live virus injectable vaccines (typically other vaccines besides the flu vaccine), newer technology“allows live virus vaccines to be  introduced as a vector or ‘trojan horse.’ In this type of vaccine,  the live virus introduces a piece of DNA into the body…” You cannot unvaccinate. How can you truly remove foreign DNA?

This vaccine modality is alarming when you consider that Epstein Barr virus and other herpes viruses are DNA viruses – why would you want a weakened live virus vaccine to work the same way? Is that real immunity or is that having the disease itself? My speculation seems too weird of a coincidence for my comfort.

And although the media likes to say that it’s a myth that you can’t catch the flu from the vaccine, I’ve seen many a coworker call in sick with flu-like symptoms after getting a flu vaccine even though the injection type of flu vaccines are not the live virus kind. FluMist, however, is a live virus vaccine administered nasally. At the very least your body is fighting off the toxicants from the ingredients and that can make someone sick.

Do tens of thousands of Americans actually die from the flu each year?

Tens of thousands of people are said to die each year from the flu. But are those claims really true?

In this article called The Influenza Deception, the writer points out:

First, it is important to point out the difference between Influenza (Flu) and Influenza-like illness. Both the flu and flu-like illnesses reveal themselves by the manifestation of the same symptoms, i.e. fever, runny nose, headache, body aches, etc. Both are caused by viruses. However, the flu is caused, logically, by the influenza virus of which there are three different types (A,B, and C) while flu-like illness is caused by a variety of other viruses.

Unfortunately, the majority of individuals who manifest these symptoms and who make a trip to their medical doctor are diagnosed with the flu, with no further testing to confirm this diagnosis…

Furthermore, the percentage of people who actually end up having had the flu actually test at a much smaller percentage than those who are prematurely diagnosed with the flu. The average percentage rate of the actual flu virus infection during the 15 years between 1997 and 2012 is 15.05%*.

Keep in mind that many of the deaths attributed to flu are from pneumonia. In this chart from the National Vaccine Information Center, it shows these pneumonia deaths that were lumped in with flu deaths over the last 40 years. Keep in mind that the influenza deaths in the chart may actually be from flu-like illnesses.

Guess how many people were really proven to have died from the actual flu in recent memory?

Here is a list of those who died as a result of confirmed influenza:

*Note from source article: “These numbers were a result of the calculations of the figures provided by the CDC and two sets of numbers as calculated by Dr. Sherri Tenpenny. These numbers, although accurate, should be taken as an approximation. The actual numbers may be slightly higher or lower by a measure of hundredths or tenths of decimal points. These numbers, however, can be confidently used as a representation of the number of flu infections during these years.”

That’s not exactly warranting of pandemic type reports from the media, is it? While I haven’t looked at recent reports, I don’t believe that there has been a sudden jump from 16 flu deaths to 80,000 deaths.

Whether it’s a vaccine ingredient list or a CDC report – always read the fine print, my friends.

What are your thoughts on the numbers?

Do you believe that 80,000 people died of the flu last year? Or is it just propaganda to increase the numbers of people who get the flu vaccine? And do you get the injection?  Have you been pressured by schools or workplaces or doctors?