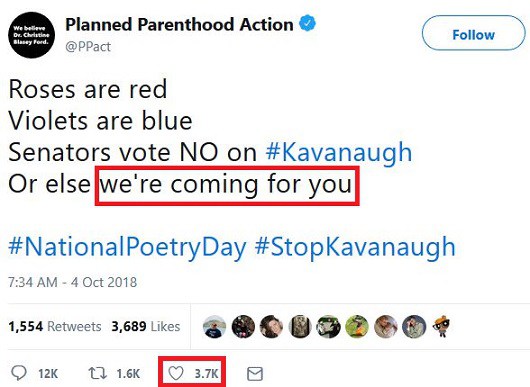 Planned Parenthood, the largest abortion business in America, kills 320,000 unborn babies every year, 900 babies every day. Its most recent annual report showed a record income of $1.46 billion — $400 million of which came from taxpayers. As Senator Rand Paul said in his speech on August 23 on the Senate floor:

This is what Planned  Abortionhood is doing with your tax dollars.

Fearing that if confirmed, Kavanaugh would be the 5th Supreme Court vote to overturn Roe v. Wade, Planned Abortionhood has spent nearly $1 million in a campaign to “#StopKavanaugh”.

This is what Planned Abortionhood tweeted yesterday morning:

Commenter Qackerjak on Voat has the best response to Planned Parenthood’s threat:

What’s PP think they’re going to do? Shove a pair of scissors into their skulls? Rip off their arms & legs? Cut up their bodies and sell them for parts? If they think they can, let them try. Conservatives are not tiny little defenseless babies… we’ll kick their asses from here to China.

Bissonnette said that the man first took out markers and defaced two of Campaign Life Coalition’s signs. Bissonnette took out her cell phone and began to record him, telling him that his defacing and destruction of private property was against the law. The man then roundhouse-kicked Bissonnette; her phone drops to the ground as she asks for someone to call the police.

After the video went viral and an appeal was made to the public to identify the pro-abort assailant, Toronto hair salon Noble Studio 101 posted a message on Instagram identifying the man as their employee Jordan Hunt, whom the salon had fired after seeing the video.

In the event that YouTube censors the video by removing it, I had this GIF made of Jordan Hunt’s assault on Bissonnette:

The Washington Free Beacon reports that Jordan Hunt also scribbled on several pro-lifers’ clothes, including those of a 10-year-old girl.

Bissonnette said she was not the only person targeted Sunday during the Life Chains. In Mississagua, someone walked up to a pro-life advocate from behind and poured paint over his clothes while he was praying. She wrote for LifeSiteNews:

“I’ve participated in many public pro-life activities throughout my life. This isn’t the first time I’ve been attacked. Rocks have been thrown at me. I’ve been spat upon multiple times and pushed. Men have aggressively asked how I would like it if they raped me and forced me to have an abortion. There is a media-driven narrative that pro-life activists are violent and a danger to women. This is a bald-faced lie. The only violence or aggression I’ve witnessed in my many years in the pro-life movement comes entirely from pro-abortion activists, and yet it’s rarely, if ever, reported.”

You should know that on August 23, 2018, a pro-life amendment sponsored by Sen. Rand Paul to revoke taxpayer funding for Planned Parenthood failed in the U.S. Senate by a narrow 45-48 vote.