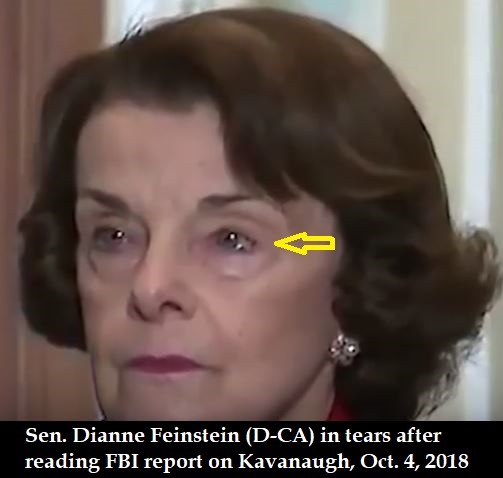 Senator Dianne Feinstein (D-CA), whose personal driver of 20 years is a Chinese spy, received Christine Blasey Ford’s letter accusing Supreme Court nominee U.S. District Court Judge Brett Kavanaugh on July 30, 2018, but made no mention of the letter nor questioned Kavanaugh about Ford during the Senate Judiciary Committee’s 4-day hearing on the nomination, Sept. 4-7.

Feinstein sat on the letter and waited until September 12 — the day when the Committee had been scheduled to vote on Kavanaugh’s nomination — to forward the letter to the Justice Department.

On September 27, Kavanaugh and his accuser appeared before the Judiciary Committee, after which Feinstein and other Democrats demanded an FBI investigation into the accusations against Kavanaugh, although the FBI had already thoroughly investigated him six times.

On October 3, the FBI completed its 7th investigation of Kavanaugh and submitted its report to the White House and the Senate Judiciary Committee. The FBI’s supplemental background report on Kavanaugh, to which all senators have access, concluded that there is no corroboration for the allegations made by Ford or a second Kavanaugh accuser, Deborah Ramirez.

On October 4, Feinstein and Sen. Chuck Schumer (D-NY) held a press conference on the FBI report. Feinstein complained that the FBI had not interviewed either Kavanaugh or Ford (both, of course, had already testified under oath to the Senate Judiciary Committee), and accused the Trump White House of “blocking” the FBI “from doing its job” and “tying its hands”.

Then it was Schumer’s turn to speak. Standing behind Schumer, Feinstein was visibly distraught, fighting back tears.

The following is an analysis of Feinstein’s body language during the press conference by Mandy O’Brien, who calls herself “Dr. Bombard”:

Meanwhile, the number of sealed indictments as of September 30, 2018 is a whopping 55,677, as President Trump beefs up Gitmo (the U.S. Navy base at Guantanamo Bay, Cuba) with more than $200 million in new construction this year and next, including $115 million for a new 848-troop barracks.