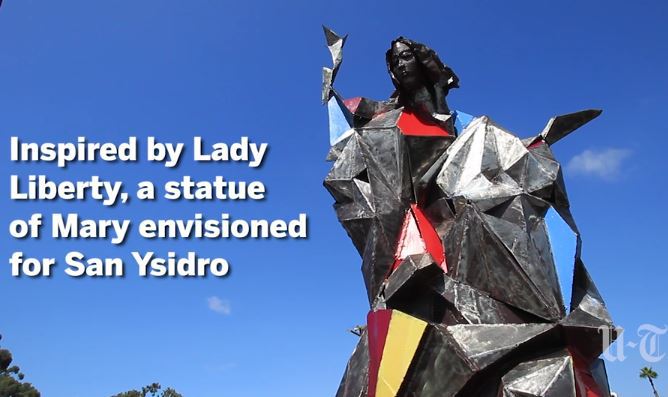 The Catholic Church is a fifth column that actively works to undermine the United States from within.

Simply put, illegal “immigration” is against the law. But the Our Lady of Mount Carmel Church on the US-Mexico border in San Ysidro, California, plans to install a hideous 40-ft. statue of Mary, the mother of Jesus, “as a symbol intended to welcome immigrants and refugees headed to the U.S.”.

The San Diego Union Tribune reports that the statue, named “Welcome the Stranger”, is designed by artist Jim Bliesner who says the statue is inspired by Mary, who had fled with her family to Egypt as a refugee soon after the birth of Jesus, and that “it will stand as a beacon of hope and encouragement for people engaged in the struggle of the migrant.”

The $2 million statue will go up on the hilltop parking lot of Our Lady of Mount Carmel Church. The project is spearheaded by nonprofit San Diego Organizing Project, and already has $1 million from the California Endowment, a private health foundation. On October 5, “community members” convened to kick off acrowdfunding campaign to raise another $1 million to build the statue by early 2019.

Bishop Robert McElroy, of the Roman Catholic Diocese of San Diego, said the monument and its location will send a strong message about the border: “It is a symbol and powerful reminder that for us, for us as people of faith, for us as America, the border represents not a line of separation, but a line that unites us to Latin America.”

McElroy said the statue will be a reminder that the U.S. is a nation of immigrants who contributed to “help build America.” It also will represent hope for a brighter future for the waves of immigrants and refuges who one day will begin “an arduous journey” to the U.S.

In a 2017 interview with America: The Jesuit Review, the Catholic magazine that withdrew its endorsement of now-Supreme Court Justice Brett Kavanaugh, McElroy said “in the Diocese of San Diego we have 200,000 Catholics who are undocumented. We simply can’t stand by and watch them get deported.”

According to Church Militant, Bishop McElroy was told of Cardinal Theodore McCarrick’s sexual predation as early as July 2016, but remained silent.

Richard Sipe, the renowned expert in clerical sex abuse who passed away on August 10, 2018, published his private correspondence with McElroy proving that the bishop had been made aware of McCarrick’s sexual harassment of seminarians.

Cardinal Theodore McCarrick has been reported by numerous seminarians and priests of sexual advances and activity. A settlement with one priest was effected by Stephen Rubino, Esq….

Priests or seminarians who speak up about a sexually active superior are threatened with the loss of everything — employment, status, etc. Those who report are greeted with disbelief or even derision if they know but were not personally involved. If they were a partner in the sexual activity and “come out” they become a pariah and labeled a traitor.

I have interviewed twelve seminarians and priests who attest to propositions, harassment, or sex with McCarrick, who has stated, “I do not like to sleep alone.”