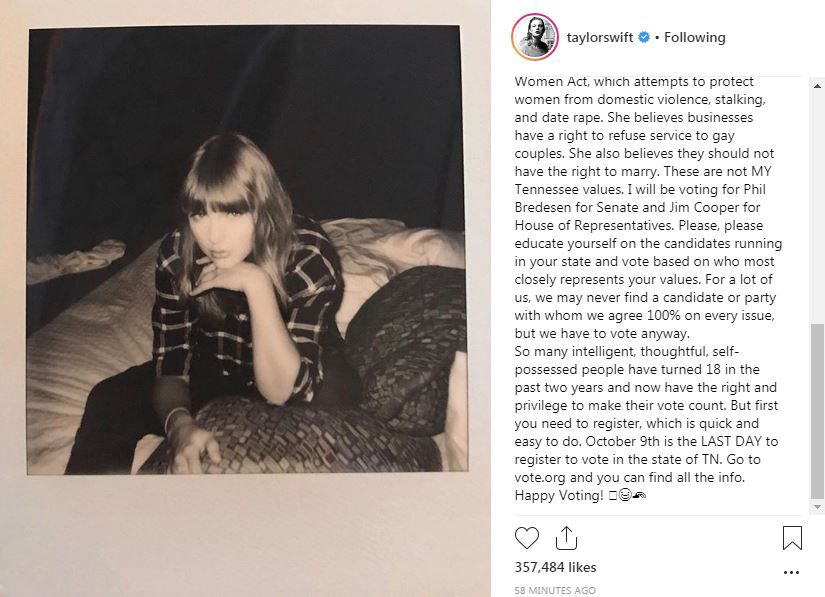 Taylor Swift decided to attack her fan base on behalf of the Democrats in the hopes of aiding them in the upcoming midterms in Tennessee.

Whoever wrote this crap for her seems to have went a wee bit overboard.

In her Instagram post, Swift said she has been “reluctant to publicly voice my political opinions, but due to several events in my life and in the world in the past two years, I feel very differently about that now.”

“I always have and always will cast my vote based on which candidate will protect and fight for the human rights I believe we all deserve in this country,” she wrote. “I believe in the fight for LGBTQ rights, and that any form of discrimination based on sexual orientation or gender is WRONG. I believe that the systemic racism we still see in this country towards people of color is terrifying, sickening and prevalent.”

I don’t know about you, but open borders, gay marriage and an all-transgender military is what I think of when I think of “Tennessee values.”

It seems like what whoever wrote this for her really hates is just Christianity and Christian values. According to the latest poll, Marsha Blackburn is +8 over her opponent Phil Bredesen (50-42). I can’t imagine Swift’s hate-filled screed attacking Blackburn as a racist bigot having much effect.

UPDATE: As The Free Beacon notes, Phil Bredesen is a big-time Kavanaugh supporter! I guess that means Taylor Swift is pro-rape!