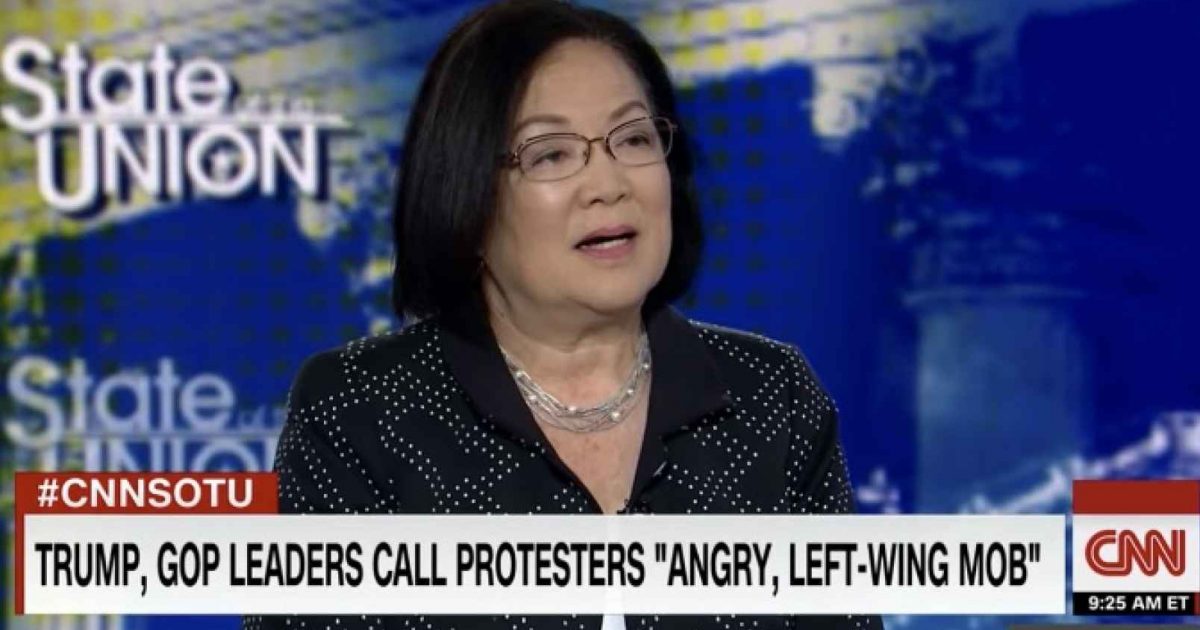 Virtually no one had even heard of Senator Mazie Hirono (D-HI) before the Kavanaugh hearings, but she has garnered her 15 minutes of fame, albeit to only demonstrate how absolutely incompetent she is.  Still, the senator from Hawaii stood right alongside Rep. Maxine Waters in her justification of harassing Republicans in public.

In an interview on CNN with Dana Bash, Hirono did not denounce such actions by Democrat supporters who want to form an angry mob like “Mad” Maxine Waters encouraged them to do to force Trump cabinet members out of the public square and threaten Trump supporters, but instead, sought to justify their criminal behavior.

BASH: The president, Republicans are saying Democratic protesters are, quote, ‘an angry mob.’ What I want to ask you about, it is one thing to protest the Supreme Court at the Capitol. That’s been done for generations and frankly since the founding of this country.

BASH: It’s another thing to run senators out of restaurants and go to their homes. Is that going too far?

HIRONO: I think it just means that there are a lot of people who are very, very much motivated about what is going on. Because that happened with Judge Kavanaugh from the very beginning, this is not a fair process. What the Republicans did was to telegraph after Dr. Ford’s account came forward, what they telegraph was, one, Dr. Ford, we don’t want to hear from you. Two, if we have to hear from you, we will rig the hearing —

BASH: Should they be going after people at restaurants?

HIRONO: This is what happens because when you look at white supremacists and all that, this is what’s coming forth in our country. There is a  tremendous divisiveness in our country. This is the kind of activism that occurs and people make their own decisions.

Say what?  White supremacists and all that?  This woman has to be taken seriously enough in order to oust her out of her position of representation.

Saying that she thinks people are “motivated” and that the confirmation hearings were “not a fair process,” along with saying that such behavior is “people make their own decisions.”  That is not a denunciation of the criminal activity.

DNC Chair Tom Perez was right the first time when he uttered, “There are no moderate Democrats left.”

However, to cover herself, she threw in, “If they violate the law, then they have to account for that.”

Only Hirono won’t actually push for that, in the same manner that she claimed to have believed the lying Christine Ford, she is also saying in that same breath she believes Judge Kavanaugh lied under oath.  Every piece of evidence and every witness supported Kavanaugh, including Ford’s lifelong friend Leland Keyser, but Hirono doesn’t have the guts to actually try and hold Kavanaugh to a perjury charge.  Everything the Senate Democrats did was a political hit in those hearings.  It wasn’t about confirming a constitutional judge.  By the way, though Republican senators pretty much bent over backward for Dr. Ford, they weren’t really set on trying to understand if Judge Kavanaugh was constitutional or not either.

It was all a dog and pony show.

That’s a lie too.  They haven’t been civil for a very long time.

Still, the fact that people in this country have debased themselves to the point of threatening to assassinate their political opponents and even their wives demonstrates the Hell that America is being turned into, not because we don’t elect Republicans, and not because we elect Democrats, but because we have turned from the Lord our God.  We have forgotten His goodness and mercy and grace that was shed upon our country and our forefathers for hundreds of years.  We have become a land of forgetfulness because we have failed to teach our children about the God who established us, who gave us our rights and established government to protect those rights and punish true criminals.

If the day comes that we are awakened to our own sinfulness and repent of it, then, and only then, will we see the hand of God move here and heal our land.  Until then, expect things to only get worse.