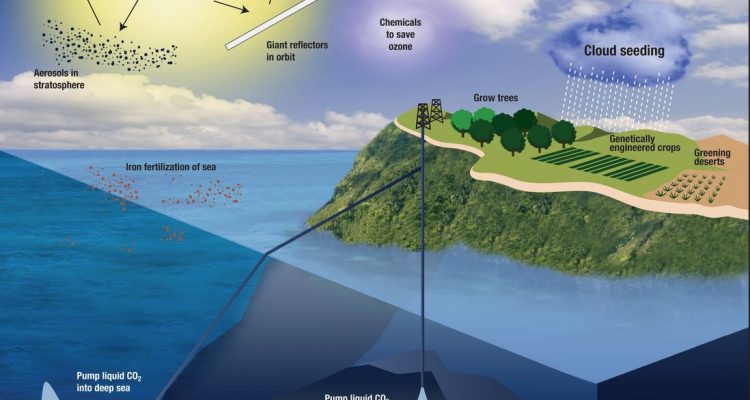 In their new report the United Nations is sounding alarm bells about the need for controversial climate engineering technology.

On October 8 the United Nations’ Intergovernmental Panel on Climate Change released a new report which makes several calls for further investigating climate engineering technology known as geoengineering. The IPCC report, titled “Global Warming of 1.5 °C, an IPCC special report on the impacts of global warming of 1.5 °C above pre-industrial levels and related global greenhouse gas emission pathways”, warns that without investment into geoengineering technology the Earth’s temperature will continue to increase.

Geoengineering is the deliberate and large-scale manipulation of the weather and climate using a variety of technologies. One popular form of geoengineering being explored by IPCC scientists is known as Solar Radiation Management (SRM), a process which involves planes spraying aerosols in the skies designed to reflect sunlight in an effort to combat “anthropogenic global warming.”

Despite the renewed call for SRM, the IPCC admits that geoengineering is currently unpopular due to potential health and climate effects. Chapter 4 of the IPCC report states,

Even in the uncertain case that the most adverse side effects of SRM can be avoided, public resistance, ethical concerns and potential impacts on sustainable development could render SRM economically, socially and institutionally undesirable.

However, following the IPCC’s new report most of the media has now begun to report favorably on the controversial proposal. Science Daily released a piece titled, “Crisis management: Seven ways to engineer climate,” while Business Insider opted for a more direct push for geoengineering with their piece, “There’s almost no chance humanity will act quickly enough to prevent catastrophic climate change, so here are the geoengineering techniques that might cool the planet.” Business Insider at least acknowledges the potential dangers, writing:

If humanity were to send planes to regularly release sulfur or some other chemical that reflected light into the stratosphere, this could cool the planet for as long as the flights continued. A number of researchers are studying and cautiously experimenting with this idea. But it could come with serious drawbacks.

But then, one day, you will look up, and the planes will be in the sky. They will be dumping tiny aerosol particles designed to deflect bits of sunlight back into space.

The important takeaway is that for those who have been following the geoengineering industry and research, none of this is surprising. In fact, this author has been reporting on the push towards geoengineering since at least 2011. Specifically, the call for geoengineering as a solution to climate change is also a gateway to global government. For example, following the release of the IPCC report, the Guardian wrote, “Ethical and institutional questions also arise over who would oversee such operations and which areas would be affected. The report suggests a number of UN organisations as possible supervisory bodies. ” At the end of the day, climate catastrophe aside, the vast majority of world leaders will use these initiatives as a method for gaining more power and control over their domestic populations.

As the media and global governments continue to push for geoengineering it is important for the populace to be educated about the dangers of such programs. Most recently we reported that researchers from UC Berkeley found new evidence that sun-blocking material will likely also reduce the yields of certain crops. The researchers came to this conclusion by studying previous volcanic eruptions in Mexico and the Philippines. The 1991 eruption of Mount Pinatubo in the Philippines and El Chichon in Mexico in 1982 caused a decrease in wheat, soy, and rice production due to the volcanic ash blocking sunlight.

This study was only the latest in a long line of studies that have concluded the implementation of SRM techniques could lead to the loss of blue skies, destruction of crops, unexpected droughts, and could actually exacerbate the problem of warming if spraying of the skies is suddenly stopped. Please read this article to learn more and share this information with everyone you know. Only by informing ourselves can we stand a chance to put the brakes on these dangerous ideas.