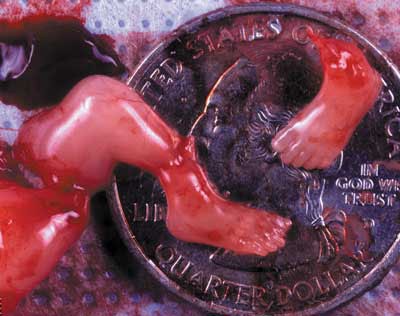 Did you know that taxpayers also pay for federal government agencies’ purchases of aborted baby body parts for medical research?

In response to pressure from Congress and pro-life groups, including Operation Rescue, the Department of Health and Human Services (HHS) finally terminated a contract with Advanced Biosciences, a company that procures aborted baby remains from abortion facilities and sells them.

After a recent review of a contract between Advanced Bioscience Resources, Inc. and the Food and Drug Administration to provide human fetal tissue to develop testing protocols, HHS was not sufficiently assured that the contract included the appropriate protections applicable to fetal tissue research or met all other procurement requirements. As a result, that contract has been terminated, and HHS is now conducting an audit of all acquisitions involving human fetal tissue to ensure conformity with procurement and human fetal tissue research laws and regulations. In addition, HHS has initiated a comprehensive review of all research involving fetal tissue to ensure consistency with statutes and regulations governing such research, and to ensure the adequacy of procedures and oversight of this research in light of the serious regulatory, moral, and ethical considerations involved. Finally, HHS is continuing to review whether adequate alternatives exist to the use of human fetal tissue in HHS funded research and will ensure that efforts to develop such alternatives are funded and accelerated.

While that is good news, the Susan B. Anthony List, which spearheaded the effort to halt all such activity, points out that this means that fetal tissue experimentation may continue as long as it meets government “standards”. SBA List President Marjorie Dannenfelser said in a written statement:

[HHS] Secretary Azar must put an immediate moratorium on funding for research using aborted baby organs and tissue purchased from the abortion industry. Further, Secretary Azar should instead devote tax dollars to ethical alternatives that – unlike experimentation on fetal tissue – produce successful therapies for patients. Canceling a single contract and conducting a review is a small step forward, but overall is completely inadequate.

Cheryl Sullenger of Operation Rescue also points out that HHS is just one federal government agency that canceled its contract to procure aborted baby body part. The National Institutes of Health (NIH) currently funds experimentation using human fetal tissue and organs to the tune of $100 million U.S. taxpayer dollars. Much of the aborted baby tissue and organs goes to create human-mouse chimera — mice that are altered to more closely resemble human systems.

The President of Operation Rescue says:

“Ghoulish experiments that use humanized mice… have no business being funded by the American taxpayer, most of whom would be horrified to learn their tax money was being used in this way. All experimentation on aborted baby remains funded by the U.S. government must be terminated for the sake of human decency.”