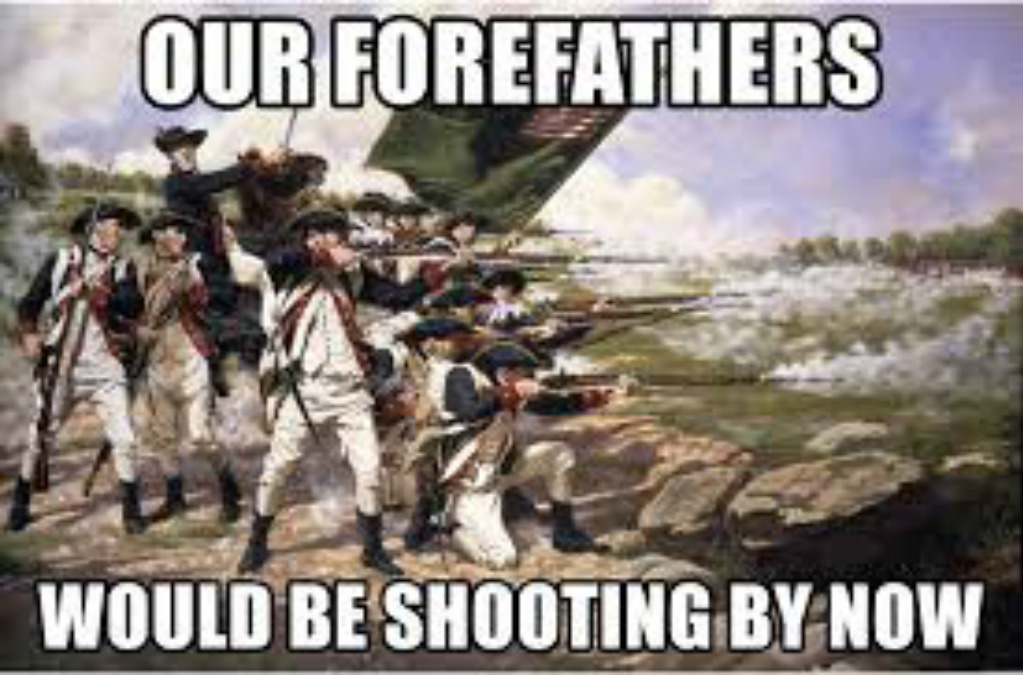 Hillary Clinton made the following statement during a recent interview and I could not agree with her
more.

Hillary Clinton: “You cannot be civil with a political party that wants to destroy what you stand for,
what you care about,” Clinton told CNN’s Christiane Amanpour. (Full disclosure, I harbor no intention
of being civil to the democrats, no matter what Hillary or others may say, as I have had more than my fill
of their bullshit).

Well here are some of the things I stand for and care about that the democrats constantly attack and my
thoughts on what we need to do about it:

The entire Constitution of the United States of America

The Bill of Rights including but not limited to:

The 2nd Amendment right to keep and bear arms for all U.S. citizens as the Constitution provides. Spoiler
alert – you do not lose your citizenship should you be convicted of a crime, nor do you lose your right to
self defense ever or for any reason.

The 3rd Amendment right to be left alone

The 4th Amendment right to have a lawful warrant based on actual probable cause, backed by sworn
affidavits and signed by a judge before any surveillance or searches of myself, my family or my property
is authorized. It would be nice if this occurred before the SWAT team kicks in my door at 3:00 AM and
shoots me and my dogs in an effort to determine if we have a couple grams of marijuana hidden on the
property. Hopefully the warrant will at least have the correct address and they won’t kill my wife so she
can sue them.

The 5th and 14th Amendment’s right to due process. You know that innocent until proven guilty thing. The
democrats sure as hell don’t seem to like that one lately.

The 5th Amendment right to prevent the government from stealing your property without due process as
they do with “Civil Asset Forfeiture” and “deposit structuring” laws among other things.

I am also against so called “assault weapons” bans or for that matter bans on anything Americans want
to do or own. Whose country is this anyway and why do we allow these assholes to tell us what we can
and cannot do? I may want a 30 round magazine and a 16 oz. soda at some point Mr. Bloomberg.

I also support the Electoral College so liberal idiots in New York and California cannot control the entire
country.

OK, enough said. It is a short list but it should be sufficient to convey my thoughts.

So do I think we should be civil to democrats – no I do not! They are against everything I stand for and
care about. To be fair there are some gutless republicans in on this too.

So what should we do? Oh, I know, let’s vote them out of office!

As far as I can tell we started voting in the United States on December 15, 1788 and it has gone downhill
rapidly from there. So why do we continue to believe the ballot box is the solution to our problems in
2018? I personally believe it is because some (many) of us are not quite ready to face the truth that this
government, in particular the democrats, have turned against us and our Constitution and they are
totally out of control. They grow in power everyday and they don’t care about you and they haven’t for
over 200 years and that includes both sides of the aisle. They are only interested in money and power.
So what should we really do? Well “they”, whoever “they” are, keep saying that violence is not the
answer. I wonder what “they” think when the democrats and their affiliated groups keep calling for
violence and civil war which is exactly what they are doing. I wonder what “they” think when democrat
sanctioned mobs attack conservatives in the street (think Antifa), call for the death of all white people
and police officers (think Antifa and BLM), run republicans out of restaurants, follow them home or just
shoot them on a baseball field. What is coming next? Do you think they may start burning down cities –
oh wait, they have already done that.

War is violent and we are dangerously close to war in this country.

I came into this world kicking and screaming covered in someone else’s blood and I have no problem
going out the same way so my thoughts are let’s just deal with it.

It didn’t need to be this way but politicians have made their choice and they will either have to live or
die with that decision. The Declaration of Independence supports the actions of the People who want to
restore representative government in this country as is shown below. It is our right and it is our duty to
those who will follow us in life.

Excerpt from the Declaration of Independence:

”We hold these truths to be self-evident, that all men are created equal, that they are endowed by their
Creator with certain unalienable Rights, that among these are Life, Liberty and the pursuit of Happiness.
— That to secure these rights, Governments are instituted among Men, deriving their just powers from
the consent of the governed, — That whenever any Form of Government becomes destructive of these
ends, it is the Right of the People to alter or to abolish it, and to institute new Government, laying its
foundation on such principles and organizing its powers in such form, as to them shall seem most
likely to effect their Safety and Happiness”. (emphasis mine)

The democrats and the rest of the American government should watch what they wish for and how they
act as there is ample room on the calendar for another Independence Day.

I think our Forefathers would be shooting by now.