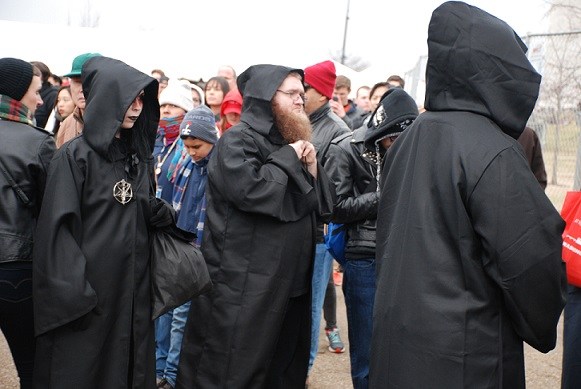 Feminism has devolved into not just man-hating (see “Feminist professor screams at her 71-year-old husband: ‘I hate all men and wish you all dead!’“), but also Satanism, in the guise of Wicca and witches. See:

Citing Quartz and Pew research data, LifeSiteNews reports that recent decades have seen a dramatic rise in paganism and the number of Americans identifying as witches while Christian denominations have been losing members. The United States’ Wiccan population skyrocketed from 8,000 in 1990 to 340,000 in 2008, a year that also found roughly 340,000 self-described Pagans. Currently, 0.3% of Americans identify themselves as Wiccans or Pagans; as many as 22.8% self-identify as atheist, agnostic, or religiously unaffiliated.

The 2016 presidential election was not just a political battle, it was spiritual war. Did you know that Satanists were among those in the Washington, DC, protest against Trump’s presidential inauguration? (Source of pics: PJMedia)

To hex is to cast a curse on someone via black “magic”.

Now, thousands of witches plan to gather in Brooklyn on October 20 to put a hex on newly-confirmed Justice Brett Kavanaugh.

Douglas Ernst reports for The Washington Times, Oct. 11, 2018, that Catland, an occult bookstore and “spiritual community space” in Brooklyn, NY, will host a “ritual” to hex Justice Kavanaugh on October 20.

The witchcraft shop’s invitation on its Facebook page reads:

Please join us for a public hex on Brett Kavanaugh, upon all rapists and the patriarchy at large which emboldens, rewards and protects them. We are embracing witchcraft’s true roots as the magik [sic] of the poor, the downtrodden and disenfranchised and it’s [sic] history as often the only weapon, the only means of exacting justice available to those of us who have been wronged by men just like him. He will be the focal point, but by no means the only target, so bring your rage and and all of the axes you’ve got to grind. There will also be a second ritual afterward — ‘The Rites of the Scorned One’ which seeks to validate, affirm, uphold and support those of us who have been wronged and who refuse to be silent any longer.

Admission costs $10 per person, but Catland says no one will be turned away at the door for lack of funds. The shop says 25% of all proceeds will go to the Ali Forney Center, a non-profit organization for homeless LGBT youths; another 25% will be donated to Planned Parenthood, the largest abortion business in America, killing 320,000 unborn babies every year, 900 babies every day, and “subsidized” by taxpayers to the tune of $400 million a year, thanks to these four senators.

Reporting on October 11, Washington Times said more than 10,000 people had shown interest in attending the event, and over 900 people have RSVP’d.

According to Huffington Post, the hexing event is organized by Dakota Bracciale, a Brooklyn-based witch who is organizing the Oct. 20 event, said the October 20 hex will involve photos and effigies of Kavanaugh, along with graveyard dirt and coffin nails.

Bracciale dismisses what “good” witches believe — that whatever curse you cast on another will boomerang back onto you three fold.

On a now discontinued GoFundMe fundraising page, Bracciale describes himself as “a queer, non-binary, disabled witch living and working in Brooklyn with my partner and our two cats, Handsome and Dahlia.”