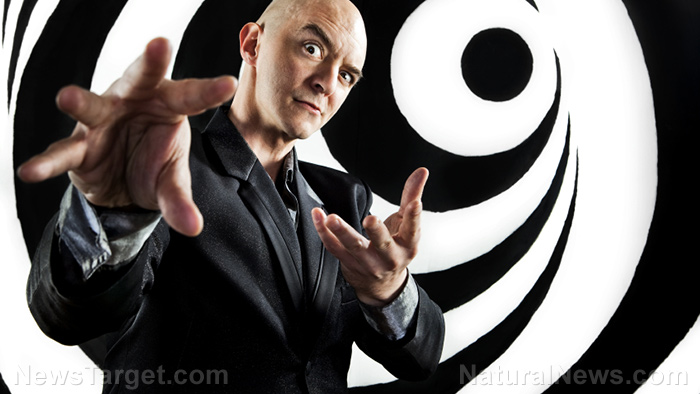 (Natural News) A stunning video posted by All News Pipeline — and hosted on REAL.video — reveals a shocking “mass hypnosis” session being performed on Democrat activists. In the video, a left-wing organizer states a sentence, and then hoards of Democrats mindlessly repeat the sentence in a zombie-like monotone.

This is why Democrats are increasingly referred to as the “Left Cult.” The behavior of leftists increasingly resembles cult-like fanaticism, complete with hypnotic auto-suggestion sessions carried out in plain daylight and caught on camera.

Watch the video below to see the shocking proof of left-wing mind control for yourself:

Organizer: “Meet me to the left.”

Left-wing crowd: “Meet me to the left.”

Organizer: “If you would like to go to an office…”

Left-wing crowd: “If you would like to go to an office…”

Organizer: “With your Senator…”

Left-wing crowd: “With your Senator…”

Organizer: “…go to that office.”

Left-wing crowd: “…go to that office.”

You have to see this yourself to believe it. The entire scene reveals an actual real-time mass hypnosis of highly suggestible left-wing activists who appear to be incapable of thinking for themselves.

As All News Pipeline describes it:

And with this creepy video giving us a look into the mindset of Democrats in 2018, where many of them are already transitioning from being merely ‘a mob’ into being ‘domestic terrorists’ as we’ve seen in antifa terrorists vandalizing the GOP’s headquarters in New York, we see the results of outright MK Ultra mind control happening before our eyes in this video via neuro linguistic programming, one of the most common forms of mind control

Note that this video would be instantly banned on YouTube, which is exactly why we launched REAL.video as a YouTube alternative.

The mass hypnosis scene brings to mind the “You are all individuals” bit from Monty Python’s “Life of Brian.” A cult classic, this comedy skit mocked the lunacy of the mindless mob… and now that same lunacy has become a political party called “Democrats.”