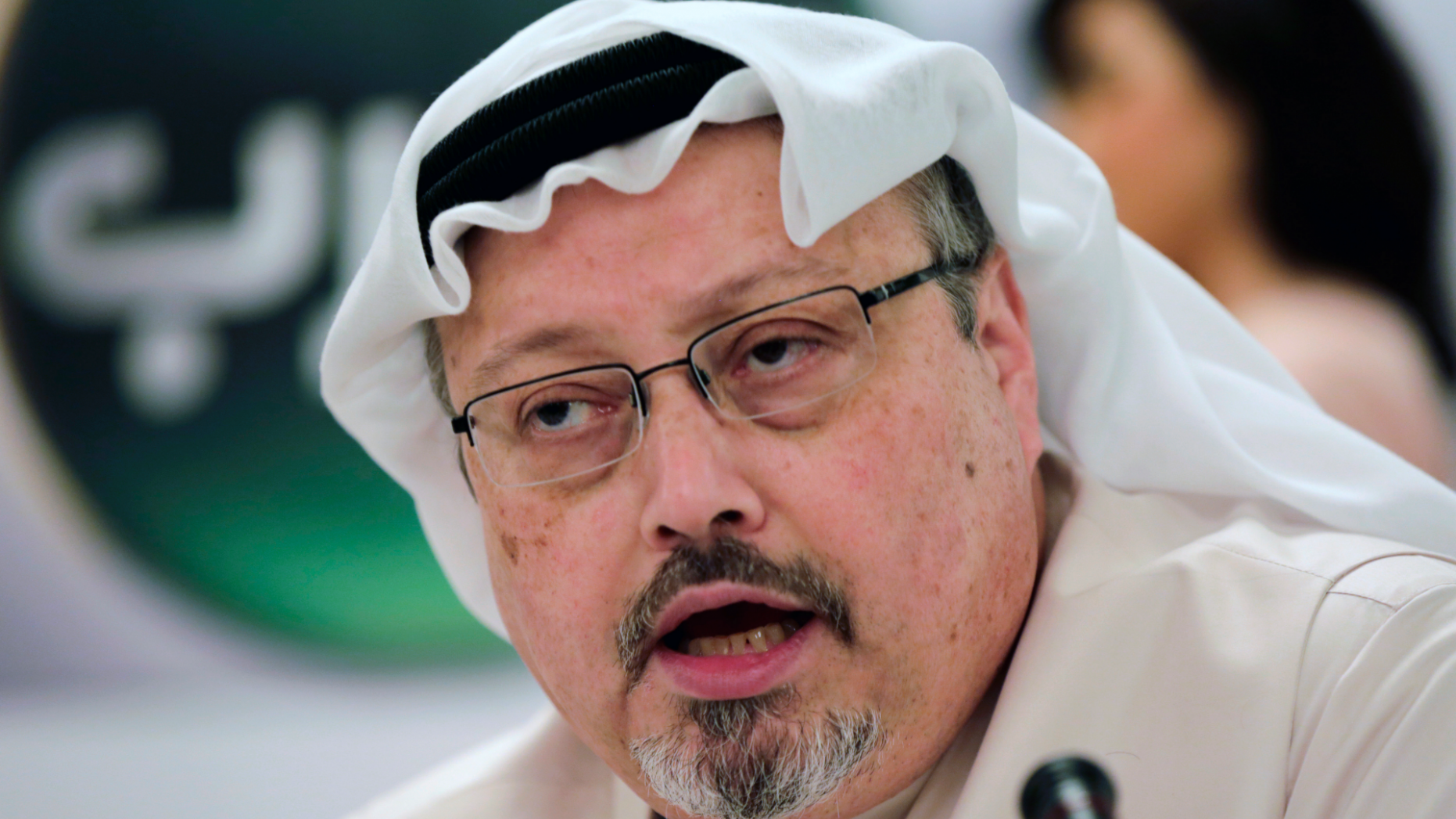 In high school, Jamal Khashoggi had a good friend. His name was Osama bin Laden.

“We were hoping to establish an Islamic state anywhere,” Khashoggi reminisced about their time together in the Muslim Brotherhood. “We believed that the first one would lead to another, and that would have a domino effect which could reverse the history of mankind.”

The friendship endured with Jamal Khashoggi following Osama bin Laden to Afghanistan. Khashoggi credited Adel Batterjee, listed at one time as one of “the world’s foremost terrorist financiers” by the Treasury Department, with bringing him to Afghanistan to report on the fighting.

The media calls Khashoggi a journalist, but his writings from 80s Afghanistan read as Jihadist propaganda with titles like, “Arab Mujahadeen in Afghanistan II: Exemplifies the Unity of Islamic Ummah”.

And when Osama bin Laden set up Al Qaeda, he called Khashoggi with the details.

After Afghanistan, Jamal Khashoggi went to work as a media adviser for former Saudi intel boss, Prince Turki bin Faisal, alleged to have links to Al Qaeda. Those allegations came from, among others, Zacarias Moussaoui, the alleged twentieth hijacker.

When the other 19 hijackers perpetrated the attacks of September 11, Khashoggi wrote that the Saudis would not “give in” to American “demands” for “unconditional condemnation” and “total cooperation”.

“Saudis tend to link the ugliness of what happened in New York and Washington with what has happened and continues to happen in Palestine. It is time that the United States comes to understand the effect of its foreign policy and the consequences of that policy,” he declared.

That’s the real Khashoggi, a cynical and manipulative apologist for Islamic terrorism, not the mythical martyred dissident whose disappearance the media has spent the worst part of a week raving about.

Jamal Khashoggi was not a moderate. Some describe him as the leader of the Saudi Muslim Brotherhood. The Islamist network admires Hitler and seeks to impose Islamic law around the world. Nor was he a supporter of freedom of the press. In one of his Al Jazeera appearances, he complained that the Saudi government was allowing some journalists to report positively on Israel.

His final project, DAWN or Democracy for the Arab World Now was meant to aid Islamists. According to Azzam Al-Tamimi, an old Muslim Brotherhood ally aiding Jamal, “The Muslim Brothers and Islamists were the biggest victims of the foiled Arab spring.” Al-Tamimi has endorsed suicide bombings.

But unlike Osama bin Laden, Khashoggi did not use the Muslim Brotherhood as a gateway drug to the pure and uncut violence of Al Qaeda or ISIS. He was still betting on a political takeover.

As he recently put it, “Democracy and political Islam go together.”

Like his old friend, Jamal Khashoggi went into exile in a friendly Islamist country. Osama bin Laden found refuge in Pakistan and Khashoggi ended up in Turkey. The Khashoggi family had originated from Turkey. And Turkey was swiftly becoming the leading Sunni Islamist power in the region. Living in Turkey put Khashoggi at the intersection of the Turkish-Qatari backers of the Brotherhood and the Western media.

His disappearance has touched off fury and anger from the Islamist regime that harbored him. And it has also set off an unprecedented firestorm of rage and grief by the American media which adored him.

Media spin describes Khashoggi as a dissident. And he certainly was that. But so was Osama bin Laden.

What Khashoggi wasn’t, was a moderate. No more so than the Muslim Brotherhood. He wasn’t a proponent of human rights, but of Islamic rule. He could be found on Al Jazeera, Qatar’s Jihadist propaganda network, bemoaning Saudi opposition to the Brotherhood and its friendliness to Israel.

“Crown Prince Mohammed bin Salman should get rid of his complex against the Muslim Brotherhood and stop treating them as the enemy or a threat to Saudi Arabia,” he complained, and urged the Saudis to fight Israel instead.

Jamal Khashoggi’s career of spouting Muslim Brotherhood propaganda for his new Turkish and Qatari masters came to an end in a curious way. Before Khashoggi allegedly entered the Saudi embassy, from which Turkey claims that he disappeared, he told his Turkish fiancé to call Yasin Aktay if he didn’t return.

Before the summer coup of 2016, Turkey was said to have 50,000 political prisoners. Many of them were members of the country’s oppressed Kurdish minority which is deprived of its most basic civil rights. These include even the use of their own language. Doing so can carry a prison sentence.

In that terrible summer, Recep Tayyip Erdoğan, Turkey’s Islamic tyrant, finished securing his absolute hold on power with the coup as his Reichstag fire. The alleged coup became a blank check for the mass arrest and torture of countless thousands of political prisoners. Amnesty International estimated that 50,000 had been detained. The UN listed a figure as high as 180,000. They included 300 journalists.

Lawyers described clients being brought to them covered in blood.

The media didn’t show any of the hysterical outrage at these crimes that it has over the disappearance of Jamal Khashoggi. The media cares more about Khashoggi, a former media mouthpiece of the Saudi regime before it turned on his Muslim Brotherhood brothers, than about 300 Turkish reporters.

Erdogan and Khashoggi are both militant Islamic activists. And their opponents, the victims of Erdogan’s Reichstag fire and the new Saudi king, had fallen afoul of them for being insufficiently militantly Islamist.

The media will always take the side of Islamists over non-Islamists. That’s why it bleeds for Khashoggi.

There was a reason why Jamal Khashoggi felt so comfortable in Turkey, while actual journalists in the country were terrified of being locked up, tortured and disappeared. If that was the fate that befell Khashoggi, it was a commonplace one in Turkey. And it may have been carried out by his own Turkish allies who decided that their Saudi subversive had more value as a false flag martyr than a house guest.

The media’s disproportionate outrage over Khashoggi has nothing to do with human rights. If it did, the media would have been just as outraged at the arrests and torture of tens of thousands in Turkey.

And the politicians shrilly urging that we punish the Saudis never thought about curtailing arms sales to Turkey. Many of the same politicians were unhappy when President Trump used economic pressure on Erdogan in an effort to free American hostages, like Pastor Andrew Brunson, being held by Turkey.

This is about Islam.

The struggle between Saudi Arabia and the UAE on the one hand, and Turkey, Qatar and Iran on the other, is the next stage of the Arab Spring. And, from Yemen to Turkey, the media has made no secret of being on the Islamist side. Its outrage over Khashoggi, like its claims of a human rights crisis over the Saudi bombings in Yemen, are not journalism, they’re the political spin of the Islamist axis.

The media has reported every claim of victimhood by the Muslim Brotherhood and Qatar’s Al Jazeera propaganda arm, while giving as little attention as possible to the victims of Muslim Brotherhood church bombings. Its coverage of Israel has been little more than terrorist propaganda since Osama was in diapers. Its coverage of the Khashoggi case is every bit as dishonest as its slanted attacks on the Saudi embargo of Qatar, as its propaganda about the wars in Yemen and Libya, and just as devoid of context.

Before the media and the politicians who listen to it drag the United States into a conflict with Saudi Arabia over a Muslim Brotherhood activist based on the word of an enemy country still holding Americans hostage, we deserve the context.

And we deserve the truth.

The media wants the Saudis to answer questions about Jamal Khashoggi. But maybe the media should be forced to answer why the Washington Post was working with a Muslim Brotherhood propagandist?