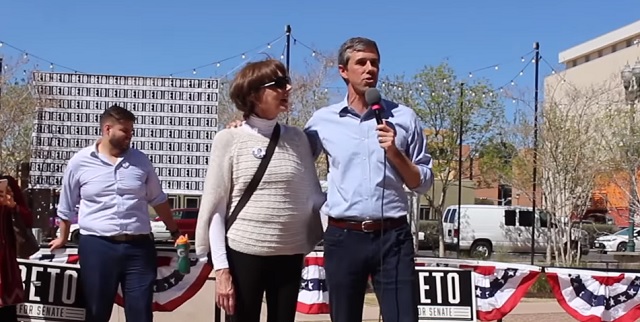 Democrat Robert Francis “Beto” O’Rourke loves to tout how he convinced his “lifelong Republican” mother to switch over and vote for him but records show she has voted in Democrat primaries since 2000 and donated to multiple Democrats including Obama in 2007.

On the campaign trail, Rep. Beto O’Rourke has cast his mother, Melissa O’Rourke, as a lifelong Republican. The Texas Democrat’s comments serve a purpose: his Republican mother is the exact sort of voter he’ll need to win over in order to defeat GOP Sen. Ted Cruz in the red state and become the first Democrat to win a Senate seat there for the first time since 1988.

[…]A copy of Melissa O’Rourke’s voting record, which CNN’s KFile requested from the El Paso County Elections Department, shows she’s voted in Democratic primaries in 15 of the last 17 primary elections she has participated, including Democratic party primaries in 2000, 2008, 2012, and 2016 that included presidential primaries. She voted in the Republican Party primary just twice, in 2006 and 2010 midterms.

“She donated to Cruz and Republican Mitt Romney in 2012, but she also previously donated to the presidential campaign of then-Democratic Sen. Barack Obama in 2007,” CNN reports.

She attributed her current move away from the Republican Party to its rightward shift under President Donald Trump.

“The immigration, the wall, the rhetoric that’s coming out. It’s just so far right. It’s just –there’s no humanity,” she said of the present-day GOP.

She “moved” away from the Republican Party decades ago. Apparently, that’s Trump’s fault.

This year she’s given $1500 to Democratic congressional candidate Veronica Escobar, who is running to replace her son. In 2007, she contributed $250 to Barack Obama’s presidential campaign. In 2012, she donated $1000 to Mitt Romney’s presidential campaign and $250 to Ted Cruz’s campaign for Senate. She also donated $125 to Republican Sen. John Cornyn in 2011, in addition to $250 to his joint fundraising committee, Cornyn Majority Committee.

Robert Francis O’Rourke, who is Irish despite going by the Hispanic nickname “Beto,” has been doing this “Republican mom” bit seemingly every day:

I guess he figures that if he can’t actually convince any Republicans to switch over and vote for him, he should just make it up.