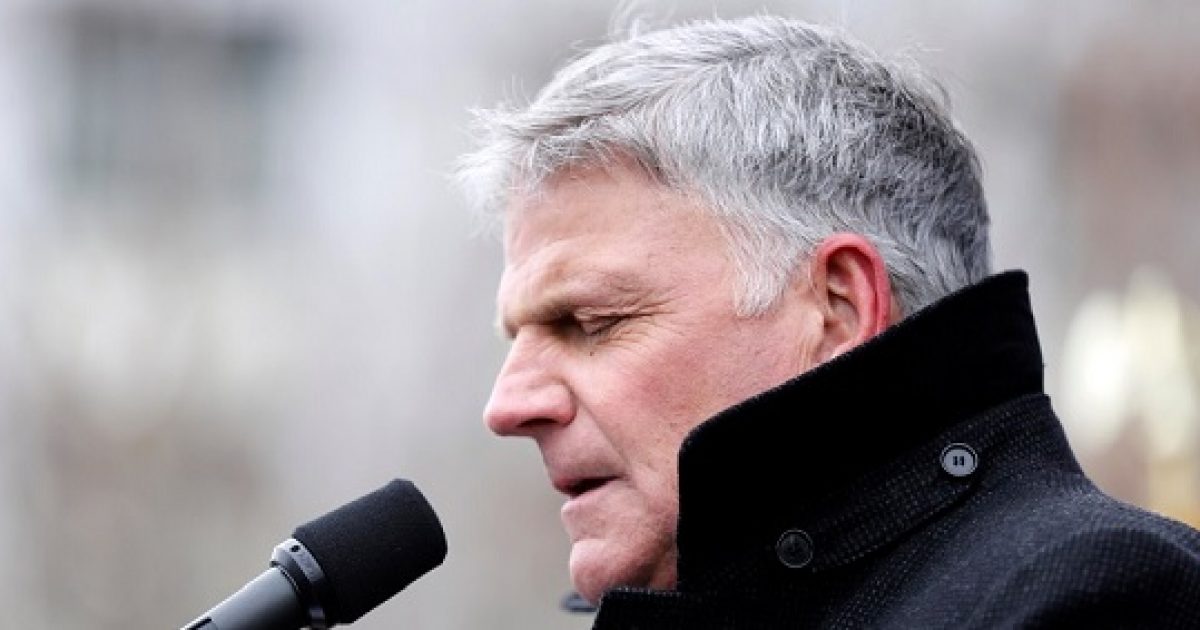 With the 2018 midterm elections looming, the Democratic Party isn’t pulling any punches – that is, if you don’t count their calls for violence against their opposition.  The true nature of the Donkey Party is on full display prompting Franklin Graham to ask, “What has happened to the Democratic Party?”  Graham’s question comes on the heels of a former US Marine and Gulf War veteran being ousted from his position as county leader for the Democratic Party over a post on Facebook.

Franklin Graham is asking what has become of the Democratic Party.

It’s after they forced the resignation of a county party leader because he posted on Facebook some time ago, “I stand for the flag, I kneel at the cross.”

Graham noted in a Facebook post to his millions of followers that Mark Salvas, a former Marine and Gulf War veteran, responded to his ouster saying: “I’m not ashamed of my patriotism, not one bit. I fought for this country. I think I have a right to have a voice and be patriotic.”

“He’s right,” wrote Graham, the CEO of both Samaritan’s Purse and the Billy Graham Association. “What has happened to the Democratic Party?”

He explained Salvas was the new chairman of the Allegheny County Democratic Party in Pennsylvania.

Salvas’ personal patriotism and faith did not set well with party leaders.

“We have a zero tolerance for sexual harassment or racism of any kind,” said Democratic Committee Chairwoman Nancy Mills. “I think Chairwoman [Eileen] Kelly made the right decision once she was aware of the issues.”

Salvas explained to Starnes that party leaders also were upset over a Facebook post by his wife showing support for a police officer accused of killing an African-American.

“Salvas said they had known the police officer and his family since the officer was a toddler,” Starnes explained.

Gainey claimed: “To put that up on Facebook was, to me, insensitive, also to African Americans, who, as you know, have backed the Democratic Party for quite a long time, and everybody knows that it was insensitive.”

He said a Democratic leader has “to be sensitive.”

Gainey’s statement claiming Democratic leaders have to be sensitive is rich in light of the rhetoric being spewed by Eric Holder, Nancy Pelosi, “Mad Max”ine Waters, Hillary Clinton, and Cory Booker that calls for violence against Trump, Trump associates, Trump supporters and Republicans.  Mr. Salvas has the God-given individual unalienable right to freedom of speech to voice his support for his country and faith in God.  But, that is not appropriate in the party that kicked God out of its midst.  And, what does voicing support for a police officer the Salvas family had known since childhood have to do with being “insensitive to African Americans?”  Being accused of a crime is not the same as being convicted of one – innocent until proven guilty.  The Salvas family is being accused of racism for voicing support for their longtime family friend.

Gainey considers that racist because the police officer friend is white and the individual he is accused of killing is black.  And, the Salvas are not embracing the “guilty until proven innocent” mentality of Democrats, which appears to be a prerequisite to remain in the party.  If you are in a leadership position of the Democratic Party, you are supposed to toe the line “guilty until proven innocent”, due process be damned.

Rep. Nancy Pelosi (D-CA), House Minority Leader, condemns due process to college male students accused of rape/sexual assault.  This past August, Pelosi chastised Secretary of Education Betsy Devos for restoring due process rights back to college males after the Hussein Soetoro administration allowed colleges to punish students accused of sexual assault on “preponderance” standards using evidence that would fail in a criminal court.

.@BetsyDeVosED has consistently worked to undermine Title IX protections for survivors of campus sexual assault. Her plan to create extraordinary new barriers to justice for survivors is an insult to students across the country. https://t.co/enx9M5e6NF

It’s obvious the Democratic Party leadership has gone over the cliff.  They have surpassed the fringe extreme anti-constitutionalists in their zealousness.  When a party member calls for the use of “guillotines” against Republicans, there is definitely a problem with the mindset of leadership that is now infecting the average Democrat Party supporting citizenry.

William Davis, deputy communications director for the Minnesota Democratic-Farmer-Labor Party,  is on suspension for his reference to “guillotines” for Republicans, in what his supervisor terms is “an inside joke.”

The Washington Free Beacon reported William Davis was suspended for a week without pay after his posting, which he later deleted.

Originally, it also included the line “11.7 Bring them to the guillotines.”

No wonder Democrats and RINOs in power want to ban and confiscate guns – makes it easier to round up their opposition for the slaughter.  Davis’s supervisor, DFL chief Cory Day, had no choice but to go into damage control mode saying Davis’s comments were “inconsistent with the standards we hold our employees to.”

This is possibly just the beginning.  If Democrats fail to take the House in the midterm elections, the rhetoric and violence could intensify.  According to Rush Limbaugh, this could make Washington, DC almost uninhabitable for a while.

“If the Democrats do not retake the House, I think Washington may be uninhabitable for a while,” talk-radio host Rush Limbaugh said Tuesday.

“I think we haven’t seen the meltdown that is going to happen among many elected Democrats, the charges of a rigged election, of Russian interference, that Trump did it again, anything they can come up with.

“They are so, so certain they’re gonna win this,” he said. “They’ve already banked on the win. They’re already planning to impeach Kavanaugh and Trump, and if that doesn’t happen, I really think they may lose it all and very quickly.”

The radio talk show host is predicting dire outcomes should the Democrats take control of the House as the polls are indicating.

The Democrats believe they have the votes to take control of the U.S. House in the 2018 elections.

Nancy Pelosi would become House speaker again, and other high-profile Democrats would control the committees, including agriculture, intelligence, foreign affairs and judiciary.

That scenario would be “brutal,” talk-radio host Rush Limbaugh told his listeners Tuesday.

“They’re not gonna stop at judiciary. They’re gonna try to get Kavanaugh thrown off the Supreme Court. They’re gonna bring back Blasey Ford, that whole thing. I haven’t even remembered 10 percent of what they’re gonna do.”

“It’s easily predictable. It’s a no-brainer. But I’m here to tell you that the objective is going to be to force Trump out of Washington, D.C., as soon as they can. They don’t want to wait for a re-election campaign in 2020. They don’t want. … They’re gonna do everything they can to make sure that the Trump administration essentially ceases to exist in January of 2019, if they win the House.”

Limbaugh is not the only one issuing warnings.  James Dodson, founder of the James Dodson Family Institute and Family Talk radio, warns “socialism would replace freedom and free enterprise” if Christians fail to vote.  Dodson stated, “Everything is on the line, and a wholly new interpretation of the Constitution looms before us.”  He describes this midterm election as “far more significant than any other – probably in the history of the nation.”  Dodson reminded those who receive his newsletter of the now infamous statement by Barack Hussein Obama Soetoro Soebarkah – “Elections have consequences.”

Americans know this first hand with the election and reelection of number 44.

But, this brings us back around to the million dollar question asked by Franklin Graham, “What has happened to the Democratic Party?”  It is now very different from the party of John F. Kennedy.  The only platform coming from Democrats is violence against the opposition is acceptable and expected when Democrats are not the majority in government.  However, it will be the same when or if Democrats attain the majority in the House or both chambers of Congress.  The Democratic Party means to rally their “useful idiots” to violence and harassment, while backing the censorship of conservatives, Christians, constitutionalists, libertarians, and other opposition, against the Trump administration, Trump supporters, and Republicans.

If there were an ICD-10 diagnosis for contagious mass mental illness, it would be assigned to fringe extreme Democrat politicians and their gullible masses.  It is almost inexplicable how so many individuals have been brainwashed to act violently and emotionally without even knowing why.  The scenario is some type of mass hypnosis that targets the weak minded, easily suggestible, and weak willed.

So, the citizenry of this republic are once again headed to the voting booth to cast a vote that keeps Democrats out of the majority, but will have little effect on ridding the republic of the Deep State/Shadow government that seeks to enslave the populous.   But, Democrats, with the help of social media, are  working at rigging this election as they have in the past.  Let’s not forget the backdoor algorithms exposed by Blackboxvoting.org that can change one’s vote.

What has happened to the Democratic Party cannot be explained simply.  It is a combination of extreme greediness; extreme lust for power that will never be satisfied; extreme hatred of everything this republic represents outlined in the Constitution; extreme devotion to the failed ideologies of socialism, communism, and Marxism; extreme hatred of Christianity; and, a plethora of other extremes yet to be identified.  Unfortunately, the more moderate Democrat citizens are scratching their head if they are using critical thinking skills, instead of backing Democrat. because that is what they have always done.  But, what can be deduced about the Democratic Party at this point is the leadership in Washington, DC has abandoned the majority of the citizens who are Democrats to co-opt the fringe elements within the party to produce a dysfunctional government that will have the population yelling for a “government solution” to a problem one party created.  More likely than not, that solution will favor government at the expense of the freedom, liberty and rights of the citizen.