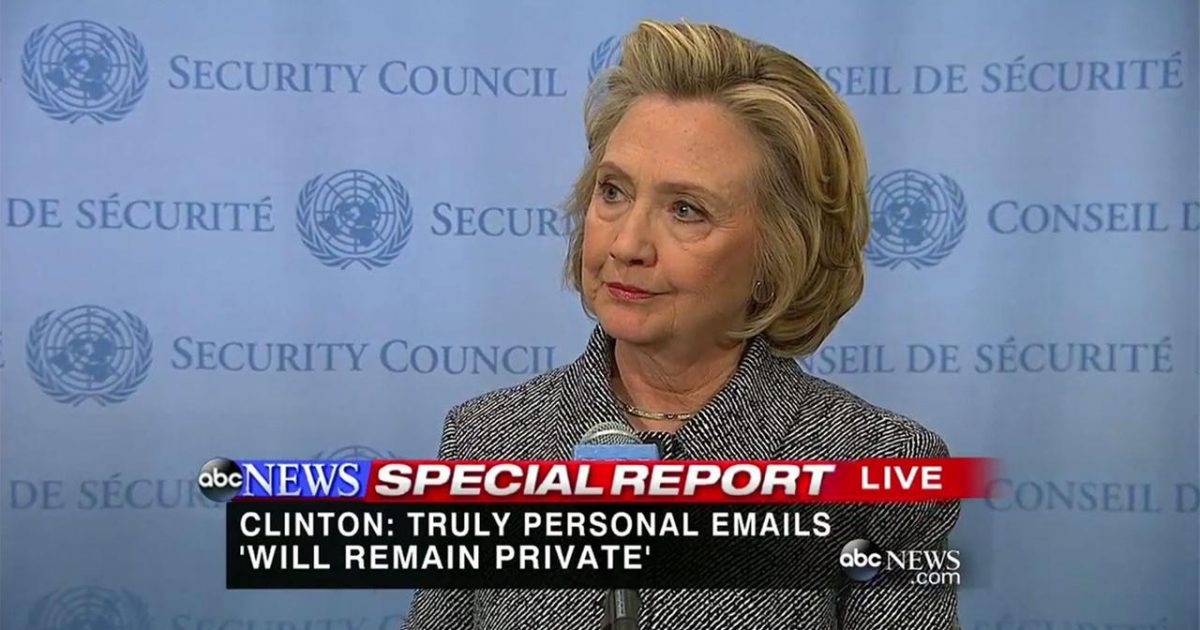 Fiesty U.S. District Court Judge Royce Lamberth came out swinging in his opening remarks at a hearing last Friday regarding the 2014 Judicial Watch (JW) FOIA request which ultimately exposed Hillary Clinton’s use of a private email server in the spring of 2015. Initially, JW was seeking information about the State Department’s response to the October 2012 Benghazi attack.

JW had sued for access to the sworn testimony of Clinton, close aide Cheryl Mills and other officials from the Clinton State Department (SD) pertaining to their initial FOIA request and Clinton’s emails. Just as the DOJ has stonewalled demands from Congressional investigators for documents, the SD continues to obstruct JW attempts to gain access to this information.

The information that I was provided was clearly false regarding the adequacy of the [Clinton email] search and… what we now know turned out to be the Secretary’s email system.

I had myself found that Cheryl Mills had committed perjury and lied under oath in a published opinion I had issued in a Judicial Watch case where I found her unworthy of belief, and I was quite shocked to find out she had been given immunity in — by the Justice Department in the Hillary Clinton email case. So, I did not know that until I read the IG report and learned that and that she had accompanied the Secretary to her interview.

The case started with a motion for summary judgment [seeking to close the case] here and which I denied and allowed limited discovery because it was clear to me that at the time that I ruled initially, that false statements were made to me by career State Department officials and it became more clear through discovery that the information that I was provided was clearly false regarding the adequacy of the search and this – what we now know turned out to be the Secretary’s email system.

I don’t know the details of what kind of IG inquiry there was into why these career officials at the State Department would have filed false affidavits with me. I don’t know the details of why the Justice Department lawyers did not know false affidavits were being filed with me, but I was very relieved that I did not accept them and that I allowed limited discovery into what had happened.

Royce accused the State Department of using “doublespeak” and playing “word games.” Following is his exchange with Prince:

THE COURT: The State Department told me that it had produced all records when it moved for summary judgment and you filed that motion. That was not true when that motion was filed.

THE COURT: It was not true.

THE COURT: It was not true. It was a lie.

THE COURT: What – that’s doublespeak.

Prince argued that the SD was not required to provide the documents “because it did not “possess” or “control” them at the time the FOIA request was made.”

Royce pointed out that the reason the SD did not possess the documents was that they were contained on a private server which was improper in the first place. He said that a search of the records “voluntarily” turned over by Clinton and her associates was not “an adequate or reasonable one.”

PRINCE: There’s strong precedent saying that items not in the State’s possession do not need to be searched….

THE COURT:  And that’s because the Secretary was doing this on a private server? So it wasn’t in the State’s possession? So you’re playing the same word game she played?

In May 2016, Royce had granted “limited discovery” to JW because:

Where there is evidence of doing and bad faith, as here, limited discovery is appropriate, even though it is exceedingly rare in FOIA cases.

The full transcript of the hearing is available here.

Similar to Judge T.S. Ellis III who presided over the Manafort trial, Judge Royce is unafraid to call out officials on their lies. He not only questions the DOJ’s decision to grant immunity to Cheryl Mills, he plainly states that she committed perjury and he finds her “unworthy of belief.” When Prince tells him that a Freedom of Information Act request for SD documents is unprecedented, he says it’s a valid request when evidence suggests the government has acted in bad faith. Unwilling to accept evasive answers and obstruction tactics, he appears to be a man who is pursuing the whole truth.

We’ve heard enough of the story to understand that Americans were enormously deceived by top officials inside the Obama era intelligence agencies. Tying up all the loose ends will require more work. But, it will be worth it in the end, won’t it?