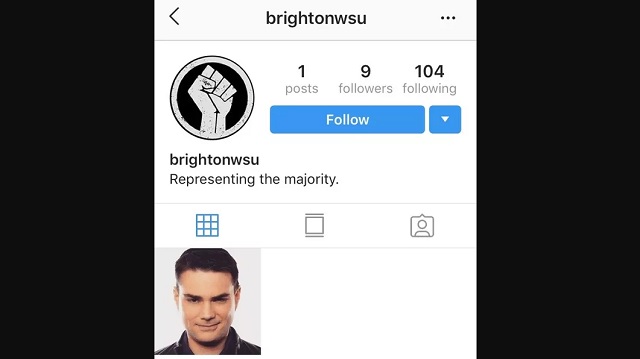 Police reportedly responded by launching a full investigation into the page, despite the account having just 9 followers and containing just one single post with a picture of Ben Shapiro along with the text, “This man will lead us into the new age. His thoughts and philosophies are 100 percent encouraged by WSU.”

From Democrat and Chronicle:

Brighton Police Chief Mark Henderson said he believes the school may have an idea of who is behind the account and is trying to learn more about what the intent might be.

It’s probably a Nazi conspiracy to overthrow the school district and launch “A Thousand-Year Reich” in its place under supreme leader Ben Shapiro. Better call in the FBI, ATF, DHS and the Coast Guard to get on this case immediately.

Dan Goldman, the district’s communications coordinator, said in a statement that the school learned of the account Tuesday evening and immediately notified Brighton Police.

Goldman said the account appeared to mirror an account for Brighton High School’s Black Student Union, which is an organization formally recognized by the school. “The account promoted the ideas of a particular commentator but did not express a threat or direct comments at any individuals,” Goldman said. “The account has since been removed. We will continue to investigate this matter and support students in every way possible.”

Henderson said the police department is taking the account very seriously, and police are not yet sure if the account is related to stickersrepresenting white nationalist groups that were recently found in Brighton and Pittsford.

“This is alarming,” Henderson said. “We are using the methods that we can to try and find out who’s doing this.”