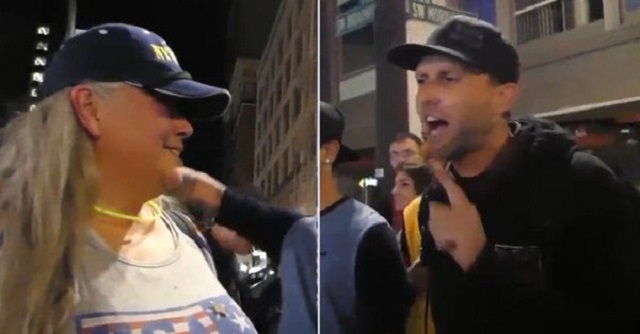 Viral video reportedly out of Portland, Oregon shows an antifa protester viciously berating a conservative woman after she told him her husband died on September 11th.

The incident is suspected to have happened Saturday at the “Law and Order” march where antifa were seen attacking Patriot Prayer group and the Proud Boys.

You don’t hear Governor Cuomo and Mayor D’Blasio condemning violent behavior. Why? Because they are part of this mob behavior. pic.twitter.com/RjgRUMeE9I

[UPDATE: The video source is independent videographer Brandon Farley and a longer video of the same night can be viewed on his YouTube.]

“Why are you trying to block me?” the man yells at the woman. “I’m f–king trying to walk here.”

“Because I obey traffic signals,” the woman responded.

“I’m not married,” the woman answered.

“I’m not like your boyfriend or your cop boyfriend who is going to f–king knock you out, so don’t worry,” the man said.

The woman turned around and pointed at her NYPD hat, saying, “My husband died on 9/11.”

“Good for him,” the man responded. “Good, good. NYPD was a bunch of sodomizers, f–king sodomizing immigrants with their bully sticks.”

“So yeah, your husband, should probably f–king rot in the grave.”

This is who Democrats and spineless Republicans like Mitt Romney and Marco Rubio insist are the good guys “fighting hate.” As I reported on Monday, the NYPD is charging 9 Proud Boys for defending themselves from attacks on behalf of antifa criminals just like this.