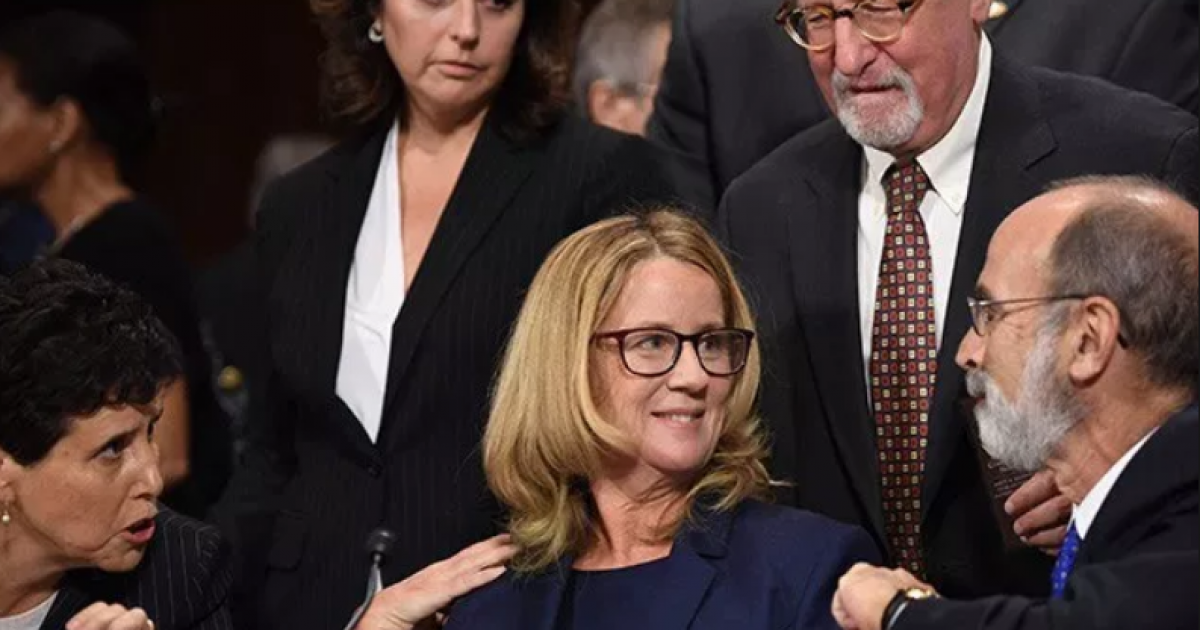 A bar complaint has been submitted by government watchdog Judicial Watch against Christine Blasey Ford’s attorneys Debra S. Katz, Lisa J. Banks, and Michael R. Bromwich “for violating the rules of professional responsibility in their representation” by withholding crucial information.

The complaint letter, dated October 16, 2018, was addressed to Office of Disciplinary Counsel of the Board of Professional Responsibility in Washington, DC.

Rule l.4(a) of the District of Columbia Rules of Professional Conduct [“DC Rules”] states: “A lawyer shall keep a client reasonably informed about the status of a matter and promptly comply with reasonable requests for information.” Rule 1 .4(b) provides: “A lawyer shall explain a matter to the extent reasonably necessary to permit the client to make informed decisions regarding the representation.”

This apparently did not occur between Blasey Ford and her attorneys, according to her own testimony.

Fitton went on to list the history of what took place leading up to the public hearing.

In a letter sent on September 19, 2018, he informed Ms. Katz and Ms. Banks that the Committee was scheduling a hearing on Judge Kavanaugh’s nomination for September 24, 2018, in order to “give Dr. Ford an opportunity to tell her story to the Senate and, if she chooses, to the American people.” Letter from Sen. Chuck Grassley, Chairman, S. Judiciary Comm., to Debra S. Katz and Lisa J. Banks (Sep. I 9, 2018) (available at https://goo.gl/ce3SVv). He informed Ms. Katz and Ms. Banks that the hearing could be public or private, and that Dr. Ford could also choose to have a public or private staff interview with Committee staff, either by phone or in-person.

“To that end,” Chairman Grassley continued, “Committee staff has attempted to contact you directly by phone and e-mail several times to schedule a call at a time convenient for you and your client. We thus far have not heard back from you with regard to that request.” Id. He reiterated that “my staff would still welcome the opportunity to speak with Dr. Ford at a time and place convenient to her.”

On September 21, 2018, Chairman Grassley wrote another letter to Ms. Katz, where he stated that “[t]he Chairman has offered the ability for Dr. Ford to testify in an open session, a closed session, a public staff interview, and a private staff interview. Press Release, Senate Judiciary Committee, Ford ‘Wasn’t Clear’ Committee Offered California Interview in lieu of Public Washington Hearing (Oct. 2, 2018) (available at https://goo.gl/6dmNJd). The Chairman is even willing to fly female staff investigators to meet Dr. Ford and you in California, or anywhere else, to obtain Dr. Ford’s testimony.” (emphasis added).

When the hearing finally took place on September 27, 2018, however, the following exchange took place between Dr. Ford, under oath, and counsel for the Committee, Rachel Mitchell:

“MITCHELL: May I ask, Dr. Ford, how did you get to Washington?
FORD: In an airplane.
MITCHELL: OK. It’s – I ask that, because it’s been reported by the press that you would not submit to an interview with the committee because of your fear of flying.  Is – is that true?
FORD: Well, I was willing -I was hoping that they would come to me, but then I realized that was an unrealistic request.
MITCHELL: It would’ve been a quicker trip for me.
FORD: Yes. So that was certainly what I was hoping, was to avoid having to get on an airplane, but I eventually was able to get up the gumption with the help
of some friends, and get on the plane.”

Nomination of the Honorable Brett M Kavanaugh to be an Associate Justice of the Supreme Court of the United States (Day 5): Hearings before the Comm. on the Judiciary., 115th Cong. (2018) (emphasis added).

Mitchell’s questioning at the hearing continued:

“MITCHELL: Was it communicated to you by your counsel or someone else, that the committee had asked to interview you and that – that they offered to come out
to California to do so?
BROMWICH: We’re going to object, Mr. Chairman, to any call for privileged conversations between counsel and Dr. Ford. It’s a privileged conversation …
(CROSSTALK)
GRASSLEY: Would – could – could we – could you validate the fact that the offer was made without her saying a word?
BROMWICH: (OFF-MIKE)
GRASSLEY: Is it possible for that question to be answered without violating any counsel relationships?
FORD: Can I say something to you – do you mind if I say something to you directly?
GRASSLEY: Yes.
FORD: I just appreciate that you did offer that. I wasn’t clear on what the offer was. If you were going to come out to see me, I would have happily hosted you
and had you – had been happy to speak with you out there. I just did not – it wasn’t clear to me that that was the case.”

He concluded the letter by writing, “Thus, it is clear, by Dr. Ford’s own testimony, that her attorneys did not communicate the Committee’s multiple offers to take her testimony in California, despite the fact that this was Dr. Ford’s preferred option. In fact, Dr. Ford testified that she ‘wasn’t clear on what the offer was’ and regarded the possibility of investigators taking her testimony in California as ‘unrealistic’-when in fact it had been specifically offered.”

“Despite knowing of Dr. Ford’s strong preference to not travel to Washington, D.C., it was inexcusable that Dr. Ford’s attorneys should have neglected to inform her of the fact that the Committee investigators were willing to meet her in California.,” Fitton added.  “Dr. Ford was thus deprived of the ability to “participate intelligently in decisions concerning the objectives of the representation and the means by which they are to be pursued.”

Fitton then concluded by calling for a full investigation into the misconduct of the attorneys.

“The misconduct of Ms. Katz, Ms. Banks, and Mr. Bromwich noted above has been widely reported,” he wrote.  “It appears likely that they knowingly subordinated their client’s interest in avoiding the publicity of a Senate hearing and avoiding travel to Washington, D.C. to the desire of Democratic Senators on the Committee to have such a hearing take place in Washington, D.C. Their failure to inform their client of the offer to have Committee staff investigate Dr. Ford in California was dishonest at worst and careless at best. Either way, it is inexcusable, and raises substantial questions about their character and fitness to practice law. It warrants a full investigation by the Office of Disciplinary Counsel.”