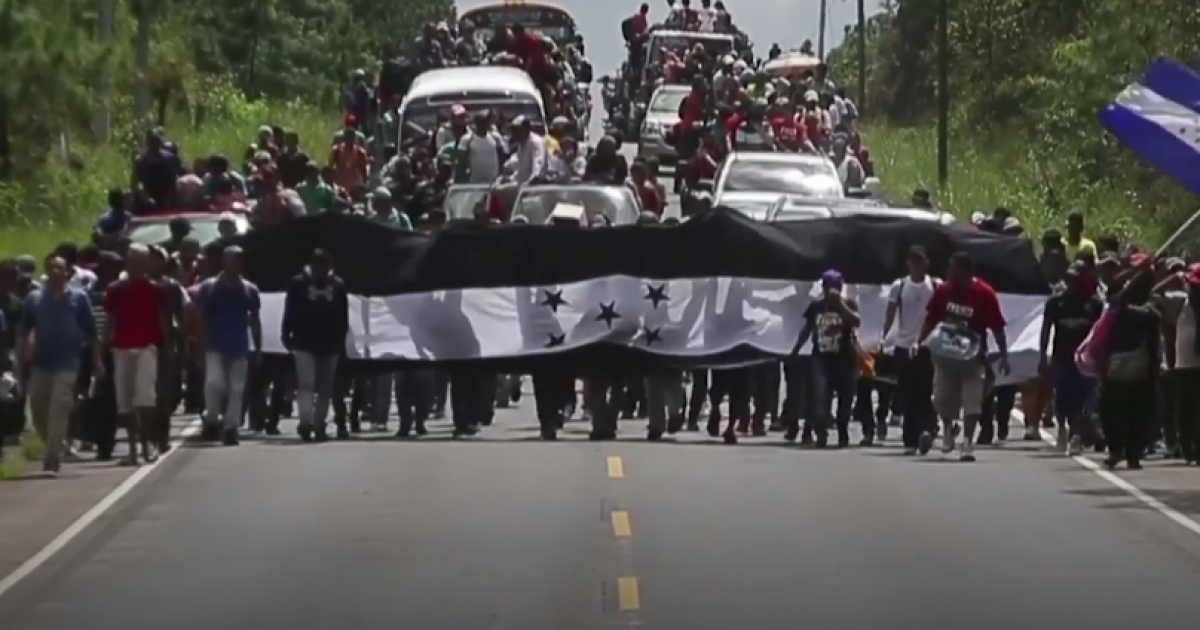 “We are coming to take the North.”  That doesn’t sound like immigrants fleeing persecution, oppression, or violence against them because of ethnicity.  It sounds like the chant of an army intent on invading another sovereign nation in order to subdue it.

If you look at the videos being posted by RT and Infowars.com, how many women and children can you pick out in the group of thousands of men tearing down the fence along the Mexico/Guatemala border?  Several were watched and only men could be found.  Of course, that could be the cameraman videoing for effect;  doubt it.  The Washington Times story contained interviews with some of the illegal alien invader women who reported children having difficulty because of the large crowd on the bridge.  Moreover, what did they wave all over the place at the Mexico border with Guatemala?  It was flags from their nation of origin.

Many media outlets report that Trump is sending US military troops to the US/Mexico border in an attempt to stop the entry of the thousands of illegal alien invaders.  In preparation of the illegal alien invaders arrival, voter registration and absentee ballots, with the designation “citizen” already marked, are being sent to the border in Texas.  And, naturally, the United Nations, the organization that despises the US, has called for both Mexico and the US to “respect migrants.”

Felipe Gonzalez Morales told a news conference at U.N. headquarters in New York on Friday that “there cannot be massive collective expulsions, for instance, in violation of international law.”

Some 3,000 migrants are currently trying to enter Mexico from Guatemala and hope to get to the U.S.

Gonzalez said that in destination countries there has been a trend toward “xenophobia” which has left many migrants fearing to go into public spaces or tribunals “for fear of being attacked or not taken seriously.”

So, Gonzales calls all American citizens who expect the government to enforce immigration laws as trending toward “xenophobia”.  He “suggests” the governments of Mexico and the US to “respect the human rights” of illegal alien invaders and “declares” that neither can engage in “massive collective expulsions, … , in violation of international law.”  International law does not apply when it comes to countries enforcing their own sovereign laws and when any activity is a threat to national security.  He also suggests that both US and Mexico establish channels for “regular migration.”  Go suck a lime Gonzales – there is no “regular migration” when it comes to crossing borders of sovereign nations.  When that happens outside accessing proper channels, it is called illegal alien invasion, which all nations can repel with as much force as is needed.

This is all the evidence needed to justify the dismantling of the United Nations and the expulsion of their “delegates” from US soil.

Fox News Channel’s Judge Jeanine Pirro, host of “Justice”, used her opening statement to address the caravan headed for the US southern border.

Pirro laid out her criteria for allowing anyone within the caravan into the country, which included public safety, what the crosser would have to offer the country and their willingness to pledge their allegiances to the U.S. flag and not the flag of where they had originated.

“The military needs to be deployed our southern border immediately to stop the caravan of thousands of illegals pouring into our nation,” she said. “Right now is a very dangerous time for Americans. Border control is essential to your safety and the safety of your family. The military, the National Guard, ICE, Border Patrol and DHS needs to block this caravan from entering our nation. Now, I’m not saying they are all criminals. What I am asking is, who are they? What I am saying is I want to vet them, screen them. I want to find out hop among them is a criminal, who among them is a gang member like the notorious MS-13 gang members who arrogantly rode into our country during the Obama years and they are in New York and elsewhere brutally and savagely murdering innocent American citizens.”

The military should be sent to the US southern border to stop the caravan because of the threat to national security.  However, while they may not all be criminals, it would take an exorbitant amount of time and taxpayer money to screen, vet, and house these invaders, which the US nor Mexico should be obliged to do when these individuals could go through the legal channels in order to immigrate.  These invaders should be turned back at the border using the force needed to do so and/or be sent back to their country of origin, which would cost the American taxpayer funds as well.

“I want to know who is a pedophile, who is a sex offender, who thinks they are entitled to beat their wives?” Pirro continued. “I want to know who has an alcohol problem, who has a drug problem, who likes to drive drunk and who has no problem hauling drugs for the cartel? And if you can prove you are not a criminal, I want to know what you have to offer us. What do you bring to this great nation? What are you going contribute? Why should we be proud to count as an America, other than adding to the Democrats voting bloc and continuing the mob mentality that you already exhibited you are proficient at. Now, if you are not a criminal I want you to get to the back of the line behind everyone else who waited for a visa, came here legally, hired a lawyer, learned American history and sworn allegiance to this great nation. And only then am I interested in even talking to you about entering. I, for one, am sick and tired of the sense of entitlement that illegals have to enter this country then immediately claim their constitutional rights as they carry the flags, not of America, but the flags of their country. And God forbid if we try to deport them to the flag of the country they so proudly wave.”

Pirro is a lot more generous than this writer would be.  It doesn’t matter what their background is, criminal or not, turn them away with the appropriate amount of force needed to do so.  There is no entitlement for anyone to enter any sovereign nation illegally.  If they want entry, they can go through the proper channels or sit at the border with no food, no water and no shelter until they get the message to return to their country of origin and apply through legal means.  Then, the application will be considered.  But, this writer would immediately disqualify any applicant who participated in the attempted illegal alien invasion of this sovereign republic.  Why?  They made their motive clear – enter the US by any means necessary except a legal one – and would engage in the same mischief once they were allowed entry.

This sums it up nicely.  It’s not a “right/left”, “Democrat/Republican”, “conservative/liberal”, “atheist/Christian” issue.  It has to do with security and safety.

When anyone talks about allowing anyone and everyone into the united States, this writer poses the analogy of considering the US as if it is your “house.”  Do you leave your doors unlocked at your home?  Do you allow anyone and everyone to enter your house?  Do you allow people you do not know to live in your house, on your property, and then provide for their every need?  In all cases, everyone posed that analogy answered “no.”  When asked why not, these individuals state it isn’t safe because of the possibility of crime.  But, when it is exposed that the “house” and “property” are being used as if it is the united States, all of a sudden the analogy is ridiculous with the reason being cited that it is not the same thing.  It basically is, but on a larger scale.

Unfortunately, the plan by the Democrats, the United Nations, some Republicans, and fringe extreme anti-constitutionalists is the systematic destruction of the united States by any means necessary.  If this is allowed to continue, American citizens will face more violence in the street, vandalism, destruction of property, and increased criminal activity against citizens.  The next thing will be the insurrection against government.

These people do not come to assimilate;  they come to conquer and dominate.  They come to turn the united States into the hellholes they left.  Remember, most of these “invaders” are men, who left their female family members behind in corrupt, criminal invested, crime-ridden countries without male protection to suffer.  Are these really the type of people we want here?

America and her people are known for their generosity throughout history.  In fact, one could say the American taxpayer supports the world.  That support of the world has now come at the expense of the freedom, liberty and pursuit of happiness of the American people.  No longer should we, the American people, continue to support those nations and people who seek to tear us down through conquest or other means nor should we support nations who have allowed illegal alien invaders to rise above the status of their own citizens.  As individuals, we take care of our own household first.  It should be the same with our republic.