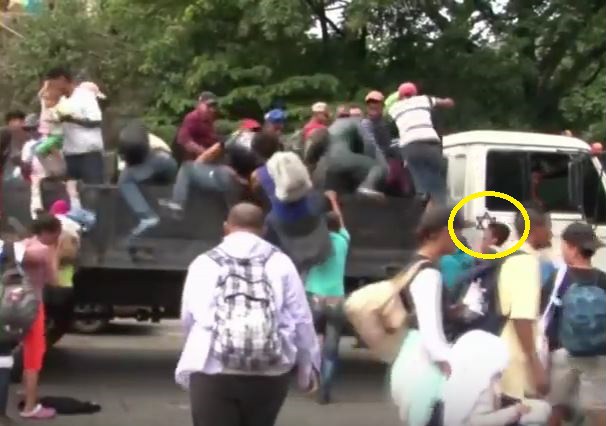 On yesterday’s post about the invasion by young, military-age Honduran and Guatemalan men, which the hate-America MSM deceptively call a “migrant caravan”, FOTM readers observed that those “poor impoverished people are adorned in more expensive clothing than I wear”. Alma asks what the media refuse to ask:

“Who’s footing the bill? They are wearing clean clothing, they don’t look fatigued from walking, they are not famished, the children are clean. Where are they sleeping. Who’s providing breakfast, lunch, dinner?”

Sharp-eyed Courtney Tubbs of The Goldwater spotted a tell-tale clue in a Canadian propaganda “news” video:

Beginning at the 3:19 mark in the video, young male  invaders scramble onto an open-bed truck. The truck has a white cab.

At the 3:21 mark is a fleeting glimpse of a blue insignia on the cab — a Star of David.

The Star of David (✡), known in Hebrew as the Shield of David . . . a generally recognized symbol of modern Jewish identity and Judaism . . . . Its shape is that of a hexagram, the compound of two equilateral triangles . . . . The symbol became representative of the worldwide Zionist community, and later the broader Jewish community, after it was chosen as the central symbol on a flag at the First Zionist Congress in 1897.

Why is a Jewish truck providing transportation for the Central American  invaders, whose ultimate objective is to illegally cross the Mexican-U.S. border into America?

The truck with the Star of David is the visual evidence confirming Jamie White’s Infowars report on October 20, 2018:

The UN and billionaire globalist George Soros are the driving forces behind the massive migrant caravan marching to the U.S. southern border, according to reports.

As with the previous caravan that sprung up last spring, the open borders group Pueblo Sin Fronteras, which is connected to Soros’ Open Society Foundation, is involved with organizing the caravan of 4,000, and the leader of the group was arrested Thursday for attacking Mexican immigration agents….

Pueblos Sin Fronteras is but one of several Soros groups financially and logistically supporting the caravan.

“At least three of the four groups are funded by George Soros’ Open Society Foundation.”

Even President Trump called out the caravan’s questionable origins, noting the convenient timing for Democrats just weeks before the midterm elections.