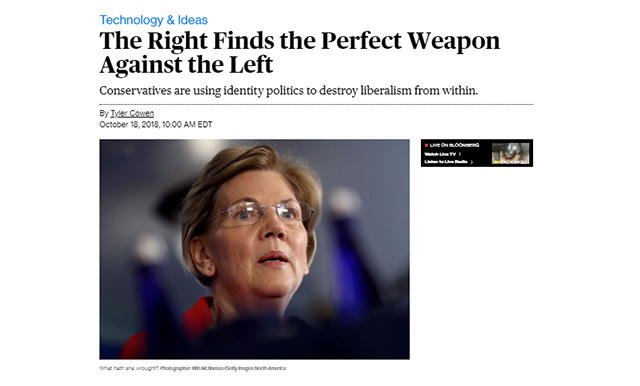 Case in point, this delusional article from Bloomberg’s Tyler Cowen which is the exact opposite of reality.

From Bloomberg, “The Right Finds the Perfect Weapon Against the Left” – “Conservatives are using identity politics to destroy liberalism from within”:

Imagine the perfect political and intellectual weapon. It would disable your adversaries by preoccupying them with their own vanities and squabbles, a bit like a drug so good that users focus on the high and stop everything else they are doing.

Such a weapon exists: It is called political correctness. But it is not a weapon against white men or conservatives, as is frequently alleged; rather, it is a weapon against the American left. To put it simply, the American left has been hacked, and it is now running in a circle of its own choosing, rather than focusing on electoral victories or policy effectiveness. Too many segments of the Democratic Party are self-righteously talking about identity politics, and they are letting other priorities slip.

Just so were clear, in Cowen’s world:

– The left’s coalition of the ascendant is divided merely by “their own vanities and squabbles” and not centuries of tribal, ethnic and religious rivalries which are still active today.

We’re reaching levels of liberal delusion that shouldn’t even be possible!

[…] if you are a right-wing, conservative, or perhaps libertarian thinker, and you consider yourself an opponent of political correctness, I have a message: Political correctness, as a movement, is a winning issue for you. It is disabling some of the ideas you don’t like. You might want to celebrate in secret, but celebrate you should.

Here’s another ugly truth. The biggest day-to-day losers from the political correctness movement are other left-of-center people, most of all white moderate Democrats, especially those in universities. If you really believe that “the PC stuff” is irrational and out of control and making institutions dysfunctional, and that universities are full of left-of-center people, well who is going to suffer most of the costs? It will be people in the universities, and in unjust and indiscriminate fashion. That means more liberals than conservatives, if only because the latter are relatively scarce on the ground.

He’s literally writing this at a time where stories like this are pushed by the media every day:

You can have your life destroyed for calling the police on someone suspicious (or merely questioning them as in the case above) if you’re not the right skin color, but we’re supposed to believe liberals like Elizabeth Warren and the leftist professors who pushed all this PC nonsense are the real victims!