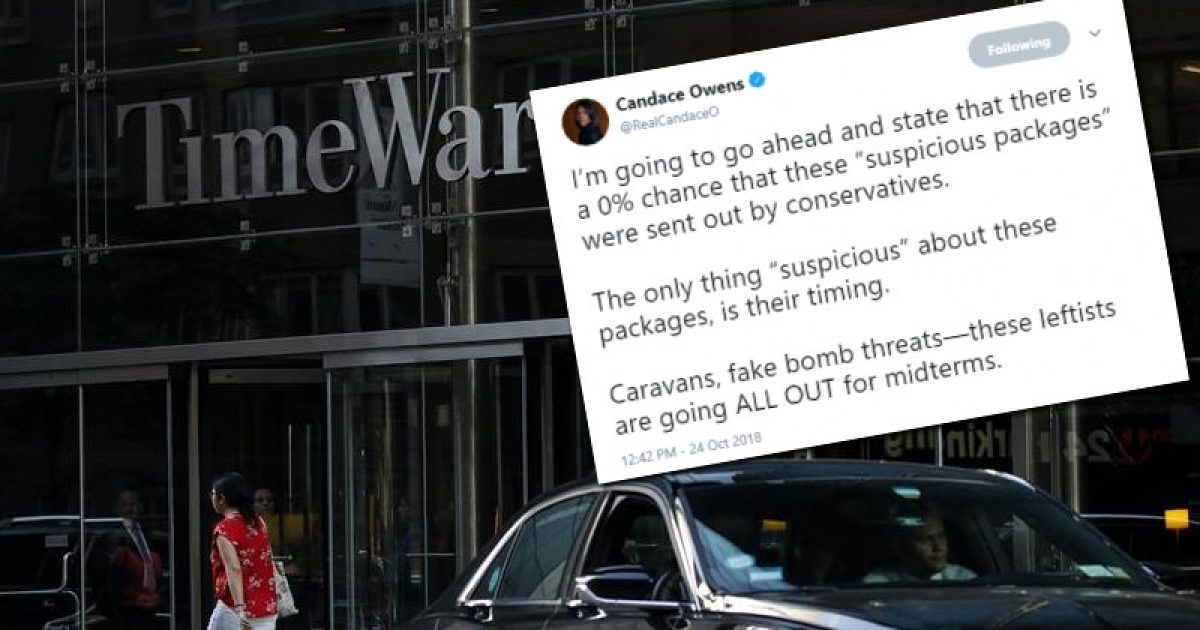 I’m just going to say it.  The only people I’ve ever seen become truly violent are those aligned with Democrats.  That’s not saying all Democrats are violent, but those that would support them are mostly Marxists, which means the ends justifies the means.  With that said, this news about pipe bombs going to key Democrats raises some suspicions just weeks ahead of the elections.

The explosive device sent to CNN’s New York headquarters was a pipe bomb and came with an envelope of white powder, police said Wednesday.

“Responding officers identified a device that appeared to be an explosive device and they removed it for investigation,” NYPD Commissioner James O’Neill said at a press conference outside the news network’s Columbus Circle offices.

“Additionally there was an envelope of white powder that was part of that packaging.”

The powder is being tested on site, while the device has been removed to the NYPD’s firing range in the Bronx and will then be taken to the FBI’s lab, officials added.

NYP then went on to report:

The NYPD busted out its rarely seen Total Containment Vessel to ferry a pipe bomb Wednesday from CNN’s Midtown headquarters to The Bronx.

Members of the department’s elite Bomb Squad carefully loaded the device into the back of the TCV, mounting it onto a suspended net inside the chamber designed to minimize jostling on the tense ride north to the Rodman’s Neck facility, police sources said.

The TCV, which is mounted onto the back of a truck belonging to the NYPD’s Emergency Service Unit, is engineered to withstand a blast from within should the device trigger during the trip, minimizing damage to those on the outside, sources said.

Advance department vehicles blocked off a route north from Midtown to the Rodman’s Neck facility, freeing up a path for the TCV to travel both quickly and with minimal risk to civilian motorists.

Escorted by a convoy of emergency vehicles including an ESU truck and an ambulance, the TCV wound its way to the remote firing range and training facility, depositing its volatile cargo in the early afternoon.

Once everything was in the clear, CNN President and Trump friend-turned-foe Jeff Zucker decided to blame President Donald Trump’s “attacks on the media” for the bomb scares.

In issuing a statement, Zucker wrote: “There is a total and complete lack of understanding at the White House about the seriousness of their attacks on the media.”

Hypocritically, he added, “The President, and especially the White House Press Secretary, should understand their words matter. Thus far, they have shown no comprehension of that.”

Interestingly enough, Zucker has never once spoke out like this about Maxine Waters and her calls for mobs to hound Republicans and Trump supporters in public and declare they aren’t welcome.

What’s even more suspicious is the fact that the alleged bombs were fake.

BREAKING: Authorities have determined that some of the bombs were FAKE, not operable, designed as an elaborate stunt

Not to mention, how does Mr. Zucker know this isn’t their supporters or Antifa, which is also their supporters?  They are the ones who actually condone violence against the innocent.  Just look at the Holocaust of American bodies via the abortion industry that CNN and Democrats support nationally!  We still haven’t heard CNN condemn the violence encouraged by Democrats like Maxine Waters or the talk of assassinating a sitting president.

A law enforcement source also tells Fox News that U.S. Capitol Police were investigating a suspicious package addressed to Rep. Maxine Waters, D-Calif., at the Capitol Hill mail screening facility. In a statement issued Tuesday afternoon, Waters said Capitol Police had told her that “my Washington, DC office was the target of a suspicious package that has been referred to the FBI.

“I am appreciative of the law enforcement entities who intercepted the package and are investigating this matter,” Waters added. “I unequivocally condemn any and all acts of violence and terror.”

To top it off, actor Jim Carrey

painted a picture of a bomb in President Trump’s mouth and tweeted, “Today they tried to murder two Presidents as well as public servants and journalists. Make no mistake, these terrorists were encouraged and emboldened by the hate speech of Donald Trump. If you can’t see the clear menace of this man’s influence by now then you are a part of it.”

Today they tried to murder two Presidents as well as public servants and journalists. Make no mistake, these terrorists were encouraged and emboldened by the hate speech of Donald Trump. If you can’t see the clear menace of this man’s influence by now then you are a part of it. pic.twitter.com/L7kYcpcPKO

Carrey is a funny guy as an actor.  Maybe he should simply stick to acting.

It’s funny though, remember Hillary Clinton’s statement that Democrats wouldn’t be civil till they took back over the federal government?

“You cannot be civil with a political party that wants to destroy what you stand for, what you care about,” Clinton said on CNN.

“That’s why I believe, if we are fortunate enough to win back the House and/or the Senate, that’s when civility can start again,” she added.

“But until then, the only thing that the Republicans seem to recognize and respect is strength.”

Holder similarly dismissed civility in politics, claiming that the new Democrat slogan is: “When they go low, we kick them.”

These are the people who have advocated for incivility and violence.  Now, they are faking these bomb threats, which are my guess since most of them were fakes.  Not one of them exploded. They are using it for political gains and nothing more.

“In these times, we have to unify, we have to come together, and send one very clear strong unmistakable message that acts and threats of political violence of any kind have no place in the United States of America,” Trump said.

“This egregious conduct is abhorrent to everything we hold dear as Americans,” Trump continued.

“We are extremely angry, upset, unhappy about what we witnessed this morning and we will get to the bottom of it,” he added.

Even the first lady chimed in.

“We cannot tolerate these cowardly attacks and I strongly condemn those that choose violence,” Melania Trump said.

Candace Owens also thinks the time of the bombs are suspicious.

“I’m going to go ahead and state that there is a 0% chance that these “suspicious packages” were sent out by conservatives,” she tweeted.

“The only thing “suspicious” about these packages, is their timing. Caravans, fake bomb threats—these leftists are going ALL OUT for midterms,” Owens added.

I might be inclined to think differently if one of the bombs had actually exploded when one of the recipients received it.  Until then, political theater.